It seemed likely that the two-time Finals MVP would leave. Now that's not so certain. 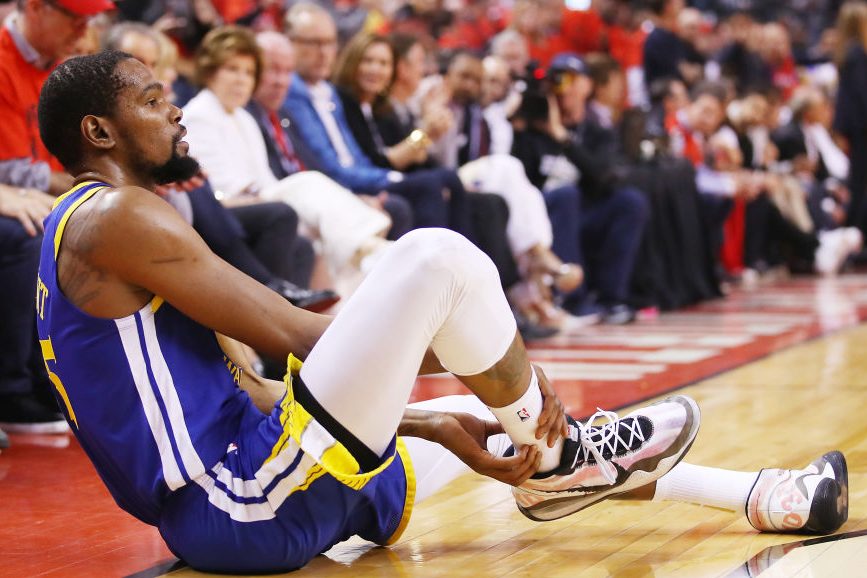 Kevin Durant’s attempt to ride in on a white stallion and rescue the Warriors in their series against the Raptors ended with a black cloud hanging over the team thanks to what is believed to be a torn Achilles tendon.

“I’m hurting deep in the soul right now,” Durant wrote on Instagram after the game. ” I can’t lie.”

Though the Warriors won the game 106-105, keeping their season alive for at least one more game, they will — barring a miracle — be without Durant for the rest of the series. That makes their chances at completing their comeback and earning a championship three-peat slimmer than they would otherwise be.

That’s the bad news. The good news, potentially, is that Golden State now has a better chance of winning the NBA Finals next year — and for years to come.

If Durant does have a torn Achilles, that means the 30-year-old, who is set to be a free agent next month if he so chooses, is looking at a long rehabilitation process which could keep him out the for the majority, if not all of, next season.

While the prospect of signing Durant to a long-term contract — as the New York Knicks reportedly had designs on doing — with the knowledge that Durant will be sidelined for the season is still somewhat feasible (the Knicks are desperate after all), it’s hard to imagine that happening.

And that’s not just because of Durant’s probable absence next season as one of the biggest reasons to sign him would be his ability to recruit a second (Kyrie Irving), or possibly even a third, superstar to come play along with him in his new home. As popular as Durant is, it’ll be much harder to recruit from crutches.

“At the end of all this, if Kevin Durant signs a five-year deal for the most money ever and says ‘I don’t know what y’all were talking about. I never said I was leaving, I was always staying’ … Would he be wrong?”

Which brings up back to Golden State and the $31.5 million contract option Durant can exercise to stay with the Warriors next season, hurt or not.

As Warriors president of basketball operations Bob Myers seemed to make clear in his tearful post-game press conference last night, the organization certainly wants Durant to stay and may even be willing to offer him an extension should he choose to opt out instead of exercising his $31.5M option.

That means an injured Durant with no guarantees about how good he will be once he comes back could secure more than $50 million more to return to a team he’s already won two championships with that still has All-Star Steph Curry and Draymond Green under contract for years to come.

For their playoff run next year, the Warriors would have, at a minimum, Curry, Green and a perennial All-Star in Durant (who should be healthy at some point next season) as the pieces of their championship core. And that’s assuming Klay Thompson, another free agent, leaves the Warriors, which is also by no means a given.

Even before the injury, Athletic columnist Marcus Thompson II, the author of the new biography KD: Kevin Durant’s Relentless Pursuit to be the Greatest, said it was possible KD might choose to stay in Golden State.

“We’ve been talking about this for two years now and nobody knows where he’s going,” Thompson told InsideHook. “The Warriors feel confident, but so do the Knicks, and so do the Clippers. I just know a lot of things have to happen. At the end of all this, if Kevin Durant signs a five-year deal for the most money ever and says ‘I don’t know what y’all were talking about. I never said I was leaving, I was always staying’ … Would he be wrong? He could do that. It was people talking and maybe it was credible but nobody would blink if he said that. It would make the most sense in the world.”

If that was the pre-injury case, it’s an even stronger one now.

A few weeks ago, it seemed more likely than not that two-time NBA Finals MVP would leave his heart in San Francisco and take the money and run. Now, in the wake of the injury, there’s a much better chance he’ll need to take the money and stay — and potentially extend the Golden State dynasty in the process.