The Minnesota Timberwolves All-Star talks with InsideHook about whether he'd leave his small market team, working out and his beard 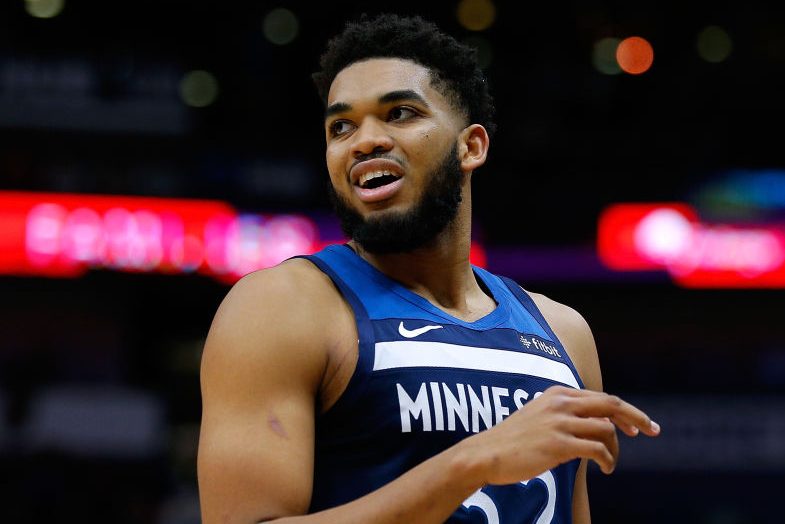 It may not be as well-known as the follicle foliage of the face of James Harden, but Minnesota Timberwolves center Karl-Anthony Towns has a sweet beard in his own right. The 23-year-old began growing it out in high school as soon as it was allowed and it has been a mainstay on his cheeks and chin for the bulk of his NBA career.

But, unlike the kind of gum he chews or the way he chews it, Towns is not superstitious about what he does with his beard. “I like it. I don’t know though,” Towns tells InsideHook. “I always say that, and then the next thing you know, I’m shaving it off. So you know, I don’t know. I’m superstitious about a lot of things but not the beard. The beard can come and go as it pleases.”

Towns, who started using a twin-bladed Gillette SkinGuard razor after experiencing symptoms of sensitive skin such as irritation and razor bumps (as 70 percent of men do), only has one game-day ritual that related to his beard. “Just try not to get too much Gatorade in it,” he says.

Joking aside, the face of Minnesota’s NBA franchise sees his beard as a way he can express himself. “Beards are in style a little bit, but you know I think it’s a two-way street,” Towns says. “Because obviously not having a beard is always in style. It’s just a different look. I think we’re at a point now where we’re more versatile than ever and it’s cool to see people either with a beard or no beard. It doesn’t matter. There’s even an in-between now with the shadows and stuff. So people are able to express themselves a little more.”

In addition to rocking a beard, the way Towns expressed himself last season was by having his best year in the league to date with averages of 24.2 points, 12.4 rebounds and 3.4 assists per game.

Similar to other modern-day star big men such as Joel Embiid, Brook Lopez and Anthony Davis, Towns can also stroke it from downtown and made a career-best 1.8 treys per game during 2018-19. Though Towns insists he only takes the shots defenses give him, he does acknowledge the 3-point shot has become somewhat of a necessary part of his arsenal in today’s NBA.

“I think the game has changed and it’s going to ask more than ever from a big man,” he says. “I think that, you know, trends always come in, and I think that it’s gonna change the dynamic of what a center could be. It’s a huge honor for people like Anthony and me to be the pioneers of that.”

In addition to their 3-point shooting prowess, there are many comparisons to be drawn between Davis and Towns, both of whom were selected No. 1 overall out of the University of Kentucky by a small-market team.

“I mean, there are similarities,” Towns says. “We [both] shocked the league with what we’ve been able to do versatility-wise and stuff like that. I have a lot of respect and admiration for my friend, Anthony Davis. But there are differences.”

One of those differences? Towns doesn’t see a scenario where he’d shoot his way out of town the way Davis did in New Orleans en route to ending up with the Lakers.

“I can’t see that my mind right now,” Towns says. “I’m very happy with it for where I’m at. I’m happy with the front office that we have now. You know, it’s a good time to be in Minnesota. We have a lot of great assistant coaches coming in this year that are really going to help take us to another level. I think we’re going to do well. Really well. I’m very excited to get back to work.”

That said, the two-time All-Star does feel that perhaps he doesn’t get the recognition he should, though playing in a small market isn’t to blame.

Under-appreciated or not in the league and within the world in general, Towns’ teammates know how valuable he is which is one of the reasons he’s the leader of the T-Wolves despite not turning 24 until November.

“It’s a challenge as a young guy to lead a team, especially with people who are way older and have families and kids and stuff like that,” Towns says. “Everyone has their pride, everyone has their method, and they’ve been doing it longer than I have. But, you know, it comes with the territory. It comes with the responsibility that’s on my shoulders and I’m more than willing to take that challenge. And I know I can lead.”

One of the ways Towns leads is by setting a good example with the way he takes care of his body, a practice which was instilled on him based on advice he got from mentor and longtime NBA veteran Al Horford.

Towns was able to improve his body enough that he was actually featured in the ESPN The Magazine’s 2018 edition of the Body Issue. “It was an honor and it was a big moment for me,” he says. “I grew up never really having that body and never being that guy who was fit and chiseled and stuff like that. After a while, I finally got to a point where I got that confidence. It was a big moment for me just to show how far I’ve come and how my body has evolved. It was cool.”