Lessons on Lawns and Life from Fenway Park’s Head Groundskeeper

A gruesome injury ended David Mellor's playing career. But 40 years later, he might be the wisest guy in baseball. 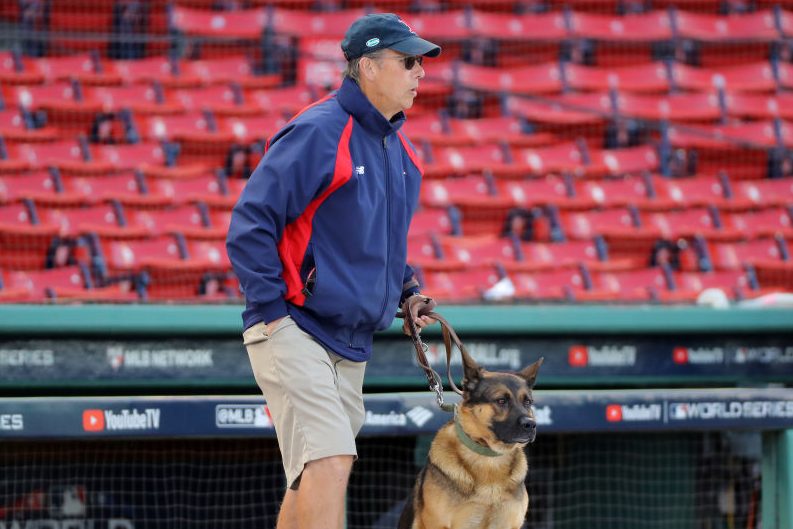 As a high-school pitcher in 1981 with scholarship offers to play ball in college, David Mellor already had the passion and desire to make it to the majors.

More importantly, he had the changeup.

But those dreams were crushed when a car in a McDonald’s parking lot did just that to Mellor’s leg, leaving him reliant on crutches for two-and-a-half years and walking with a cane for an additional 10 months.

No longer able to play baseball but still in love with the game, Mellor began brainstorming alternate ways he could keep his Major League Baseball dream alive after being encouraged by his family to think of things he loved.

“My family told me how lucky I was and to use my time wisely to find a career that I would love,” Mellor tells InsideHook. “They told me how so many people in life don’t have a job and a career that they love. I grew up taking care of people’s lawns and enjoyed that. Science was a subject I enjoyed in school. I loved baseball and I loved being outside. So I figured somebody had to be a Major League groundskeeper.”

Mellor enrolled as an agriculture major at Ohio State University and then landed an internship with the Milwaukee Brewers which eventually led to a full-time groundskeeping gig with the club in 1987. It was while working for the Brewers in 1995 that Mellor was hit with an all-too-familiar curveball when a woman with mental-health problems drove her car onto the field in Milwaukee and hit Mellor.

Already battling flashbacks of screeching car tires and made to cringe at the smell of McDonald’s French fries, Mellor had to deal with the fallout of being hit by a car for a second time.

Fully recovered six years later — at least physically — Mellor, a lifelong Red Sox fan, got a break that didn’t involve his leg and landed his dream job working as the Senior Director of Grounds at Fenway Park in Boston. Three years later, the team won its first World Series in 86 years.

While working for the team in 2010, Mellor, who was still experiencing anxiety and enduring screaming nightmares on a nightly basis, was leafing through a magazine and came across an article about a new treatment facility for veterans dealing with post-traumatic stress disorder (PTSD). That discovery turned out to be a life-changer.

“The first paragraph listed 12 symptoms of post-traumatic stress. As I read them, I realized I either actively had or had dealt with 10 of those 12 symptoms. Chills ran through me and tears started coming down my face. And while it scared me, it gave me hope that if I actually had PTSD, then hopefully I could get treatment and be a better husband, and be a better dad. And that if it helped me, it would be a bonus.”

Now, nine years into treatment, Mellor’s nightmares are gone, he’s got a service dog named Drago and Fenway’s grass is as green ever.

Given that backstory, Mellor, whose new book One Base at a Time: How I Survived PTSD and Found My Field of Dreams documents his tribulations as well as his triumphs, is equally qualified to discuss life as he is lawncare.

Here are four suggestions he shared with us that will benefit anyone who’s going through a rough patch.

If you think you need help, ask for it

Once you do ask for help, don’t be ashamed to receive it

“When I walked in to the hospital the first time, going to see a psychologist, I went with my hat down, hoping nobody would recognize me. Now, when I go to see my counselor and my psychologist, man, I’m proud to be there and I’m proud to be a PTSD survivor. And I’m not ashamed to say I’m seeing my counselor or my therapist. I hope people can learn from my mistakes and learn from how much counselings changed my life and helped my family.”

If at first you don’t succeed, try, try again

“I want to encourage people when they go see a counselor, that if they don’t happen to gel or fit with that first counselor or that first type of treatment that, there are a lot more counselors out there and a lot of different types of treatment. At first, I didn’t think somebody could relate to the symptoms I had. Do not give up.”

“I encourage people to make the most of every day because life changes quickly. My brother Terry was not only my brother, he was my best friend. In July of 1998, we had a wonderful weekend together and we said our normal goodbyes. Two days later, my sister-in-law called and said, ‘Terry’s gone.’ There are just so many things I wish I would have told him. I hope people can learn from my mistake and reach out to their loved ones today and often. To really tell them how important they are, because life just happens so quickly and you don’t want to live with that regret. Celebrate life and tell people how important they are.”

If you or someone you know are possibly suffering from PTSD and want help, Mellor suggests the Home Base program at Massachusetts General Hospital as a resource.