How the music played when players take the field or step to bat has changed the game.

Mariano Rivera #42 of the New York Yankees reacts after closing the eighth inning against the Philadelphia Phillies in Game Two of the 2009 MLB World Series at Yankee Stadium on October 29, 2009 in the Bronx borough of New York City. (Jed Jacobsohn/Getty Images)
By Will Levith

There was a time in the mid-1990s when New York Yankees’ closer Mariano Rivera would enter a baseball game in the eighth or ninth inning, and a baseball fan could basically predict the future.

Another win for the Yanks. He (and his signature fastball that looked to batters like dead-aim strikes, only to take an ever-so-slight cut before reaching the catcher’s mitt) were just that good.

To ice opposing hitters at Yankees Stadium, a song would blare on the PA while Rivera made his slow egress out to the mound from the bullpen: Metallica’s “Enter Sandman.” It was the perfect sonic descriptor for what would become of you if you faced his late-inning cutter (you’d be put right to bed). So Rivera quickly became known as the Sandman.

While “Enter Sandman” became indelibly linked to the future shoe-in Hall of Famer, it’s not the only instance where a walk-up song became a hit with baseball fans. In fact, it’s one in a Spotify list worth of songs that have been used throughout the seasons at ballgames across the country.

As Deadspin notes, the history of the walk-up song can be traced back to the 1972 baseball season and another Yankees relief pitcher—Sparky Lyle. One of the team’s publicists chose Edward Elgar’s “Pomp and Circumstance” (a.k.a. the Graduation March) for Lyle, known to make a rather ostentatious entrance.

Of course, back then, ballplayers weren’t making multiple millions of dollars and sitting on millions more in endorsements, so the swagger was quite a bit less refined. As former major league pitcher Tom Candiotti, who clocked seasons with teams like the Cleveland Indians, Toronto Blue Jays, and Los Angeles Dodgers, tells RealClearLife, “When I was with the Dodgers (in the ’90s,) the organist would always play ‘The Candy Man’ every time I took the mound.” (The knuckleballer’s nickname at the time? “The Candy Man.”) 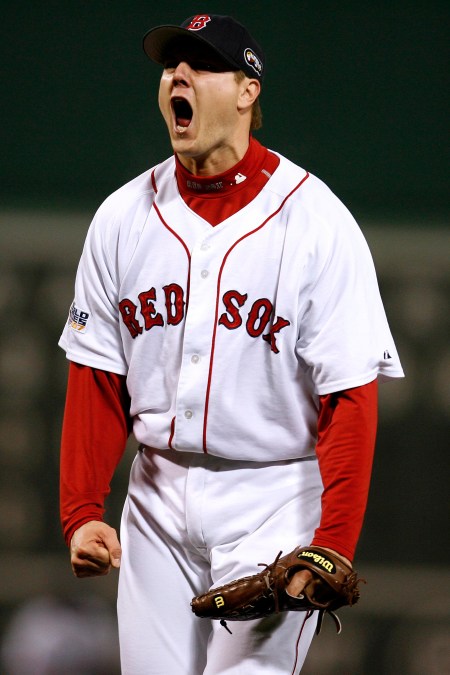 Jonathan Papelbon of the Boston Red Sox reacts after winning Game 2 of the World Series in 2007. (Jon Mahoney/Bloomberg via Getty Images)

As rosters got younger and paychecks bigger, walk-up songs came to define some hitters and pitchers—and even helped them get the job done better. Take former Boston Red Sox closer Jonathan Papelbon, who walked onto the field to “I’m Shipping Up to Boston” by punk band The Dropkick Murphys (you’ll find a link to the song at the bottom). The crowd would go nuts the second the first notes were played, and it made for a rather chilling situation for the opposing batters. Papelbon was one of the main cogs in Boston’s 2007 championship season.

Future Red Sox closer, Koji Uehara, would also have a memorable walk-up song in Euro discotheque staple, “Sandstorm,” which he would ride all the way to the final out of a 2013 World Series victory.

These days, walk-up songs are a given for most rostered players on nearly every MLB team—and are one way of tracking the league’s deepening diversity in its clubhouses. On any given team, you can find hip-hop, heavy metal, Latin, country, and Christian rock, a real testament to how each of its players define themselves.

And walk-up songs aren’t just for pitchers anymore; pretty much every hitter has one, too—though it’s obvious why the pitchers’ tunes get the most play in the media: Pitchers have a lot farther to walk out from the bullpen, so the tension has time to build. Hitters are merely walking over from the on-deck circle.

Below is a playlist of some of the current walk-up songs from star pitchers (and hitters) on teams in the majors this season—as well as some additional trivia for some of them. You can search the majority of players’ walk-up songs via MLB’s Ballpark app under “Music.”

New York Yankees – Aaron Judge – Travis Scott, “Through the Late Night” (Though we can imagine the Yanks will think of something new once he has a firm, official nickname. Last year, they were playing the Law & Order: SVU theme when he made his way to the batter’s box. Clearly, it didn’t stick.)

San Diego Padres – No Songs Listed – At press time, the team is in dead last. Coincidence?

Tampa Bay Rays – Evan Longoria – Tantric, “Down and Out”

Washington Nationals – Daniel Murphy – Dropkick Murphys, “I’m Shipping Up to Boston” (As we mentioned up top, this used to be the walk-on song for ex–Red Sox closer Jonathan Papelbon. Maybe Murphy wants in on Beantown? We’ll take him; he’s having another monster season.)