With the Chiefs enjoying their bye week at 5-2, we caught up with the All-Pro pass-catcher on a variety of topics

Travis Kelce of the Chiefs has some interesting eating habits, including a passion for BBQ.
Ezra Shaw/Getty
By Evan Bleier @itishowitis

One of the most potent offensive weapons in the National Football League, Chiefs All-Pro tight end Travis Kelce has been on the receiving end of seven of Patrick Mahomes’s league-leading 20 touchdown passes this season and the chemistry between the two All-Pro playmakers is a huge reason why Kansas City sits atop the AFC West at 5-2.

When it comes to offense, there’s no doubt that Mahomes and Kelce, who recently partnered with Tide Hygienic Clean to bust the myth that lucky jerseys don’t need to be washed, share a brain. However, when it comes to the type of condiment that belongs on the famous BBQ that’s available in Kansas City, their thoughts diverge. As Kelce recently told InsideHook, the seven-time Pro Bowler does not endorse what the Chiefs’ star quarterback drizzles on his BBQ and everything else: ketchup.

“I’ve seen him do it numerous times. I don’t quite get it, but I’m pretty sure he just loves the taste of ketchup and he can’t help himself,” Kelce tells InsideHook. “It goes on steaks. I’ve seen him put it on some eggs before, which is absolutely disgusting. The guy just has a love for ketchup. It’s legit. It goes on everything.”

To get the former Cincinnati Bearcats star’s thoughts on everything from the best spots in KC for BBQ to what the season has been like thus far with the Chiefs enjoying their bye week, we caught up with the 33-year-old.

InsideHook: Patrick has his ketchup obsession. Do you have any odd food habits?

Travis Kelce: I love BBQ, but every pregame meal has been French toast and strawberries since I’ve been on the Chiefs. When we play at home in Kansas City, I have a lot of friends and family come into town to hang out at the house. We usually get some type of pizza sent over to the house or will maybe even ask a food truck to stop by. As much as I want to disappear and fall off the face of the Earth when we lose, having those family members and friends and their support at the game usually cheers me up. They make the tough games easier and definitely make the fun games more fun.

IH: Fortunately for you, there haven’t been too many tough games over the past few seasons.

TK: It hasn’t been too bad here in Kansas City, but how it ended last year definitely left a sour taste on our mouths. This season there are a lot of new faces both on the offense and defensive sides, but I’d say it’s been smooth transition. We’ve asked a few of the young guys to step into leadership roles and they’ve done absolutely awesome. We’re really starting to learn who we are as a football team and how we need to approach every single day and every single game. It’s early in the season, but it feels like we’re just as dominant as we’ve been in the past. That’s exciting.

IH: Is it as awe-inspiring to play with Patrick as it is to watch him as a fan?

TK: It’s pretty fun playing with Patrick. He has an unbelievable ability to make plays at any point in the game in any way possible. He can extend plays to score touchdowns and just catapult us into winning football games. It’s been a blast playing with him.. I like to think I work my tail off to be accountable in all aspects of the game, but No. 15 is also one of the hardest workers in the building. 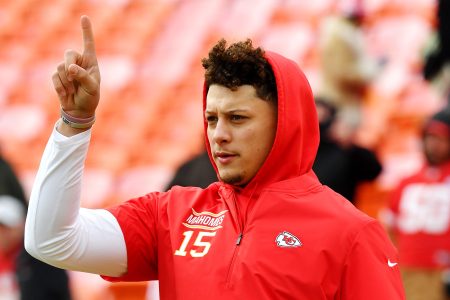 TK: The plays just keep getting drawn up, man. I remember walking into coach Reid’s office in the offseason a few years ago and he just had stacks of index cards of new plays. It was probably four or five stacks all on top of each other. It was ridiculous. I couldn’t tell you how many plays were in those stacks, but it got me to understand that it’s a never-ending process and he’s always trying to find new ways and new angles to keep the defense a tick behind. It’s a fortunate situation to be in when the guy dialing up plays never gets complacent with what he’s got in front of him.

IH: When Travis Kelce wants some BBQ after a Chiefs game, where does he go?

TK: It was definitely a match made in heaven when I came here. The local BBQ spots are unbelievable. My first couple months here I was going to a different spot ever week and my physique wasn’t where it needed to be as a professional athlete. I had to cut back a little bit, but I usually get it at least once or twice a month. I have a few favorite spots throughout the city. I love Q39. I love Jack Stack Barbecue. That’s white tablecloth-style barbecue so it’s a little bit fancier, but still you can get messy if you want to if you have some Tide PODS. Then there’s Kansas City Joe’s, which was originally Oklahoma Joe’s. That’s the famous gas station barbecue but you can’t go wrong with Arthur Bryant’s or Gates. I’ve been to just about all of them, but you can’t go to these BBQ joints with a white shirt. If you do, you’re definitely risking it all.