The Milwaukee Bucks are currently the NBA’s best team. At 47-8, their +12.11 margin of victory is the best of the millennium and has set them up as a historically dominant outfit. Here’s a true juggernaut, moving in silence like lasagna, with an elite coach, an eliter offense and the elitest defense.  All this, and Giannis Antetokounmpo, the overwhelming favorite to repeat as the MVP and a game-breaking superstar who has answered the bell as LeBron James’s heir. After a summer of conjecture that this season would be a chaos-laden course correction after the Warriors’ grip on the league finally loosened, the Bucks have suplexed that line of thinking through a folding table.

These Bucks are so ruthless, so clinical, that their greatness has become rote rather than awe-inspiring. They’ve lost only a single game to a sub-.500 team, and 31 of their 46 wins have come by double digits. And the Bucks were similarly dominant last season, racking up 60 wins before Kawhi Leonard and the Toronto Raptors stifled them in the Eastern Conference Finals on their way to winning the championship. Having retained the bulk of last year’s team, these Bucks, at a glance, appear to be nothing more than 2 Milwaukee 2 Bucks — a sequel to a good team that’s too heliocentric and inflexible to ascend to championship level.  To a degree, this is true; to a much larger degree, it’s totally missing the point. The Bucks this year have become an even more effective version of themselves — they’ve eliminated their flaws, not through strategic shifts or roster changes but by perfecting their style until they’ve nearly become flawless.

For Milwaukee, everything seems strikingly easy. The offense is uncomplicated: Antetokounmpo, surrounded by shooters. This works in large part because Antetokounmpo is peerless, unmatched in his ability to generate unassisted dunks and shots at the rim. Offensive gravity (the concept of how closely a defender sticks to his man) is usually mentioned in relation to perimeter players like Stephen Curry who stretch out defenses by requiring constant attention even without the ball. Antetokounmpo possesses the inverse. His force of attraction compels panicked defenders to converge on him in the paint and abandon their original assignments. More cruelly, he has developed a serviceable-enough jumpshot, which has helped propel him to career highs of 30.0 points and 5.8 assists per game. This jumpshot is hardly reliable, but it’ll be an asset in the playoffs when teams try to replicate Toronto’s strategy from last year by barricading the paint and forcing Antetokounmpo to beat organized, half-court defenses.

Beyond merely complementing Antetokounmpo, Milwaukee’s supporting cast has ample offensive utility. Even without their star, Milwaukee would boast an offensive rating equivalent to the sixth-best in the league. Under the guidance of head coach Mike Budenholzer, Brook Lopez has mutated from one of the last true post-up specialists into a three-point gunner; he’s a seven-foot tall Tame Impala song, a throwback spirit updated to fit modern sensibilities. Alongside a coterie of sharp-shooting wings and guards, Lopez enables the kind of five-out spacing that’s now the platonic offensive ideal. Then there’s two-time All Star Khris Middleton, perhaps the East’s best offensive shooting guard, averaging 20.4 points per game on a sterling 62.4 percent True Shooting percentage. Middleton provides necessary insurance as another self-sufficient scoring option, which is even more crucial if Eric Bledsoe continues his yearly aversion to being good at basketball in the postseason. Despite a mid-range heavy diet, Middleton remains a paragon of efficiency thanks to his ability to leverage his long, languid strides and angular elbows into an uncontestable jumper that he flicks over defenders.  In this vein, Budenholzer’s philosophy is governed more by an ethos of freedom of movement and expression than a hefty catalogue of set plays. The offense is viciously simple, centered around the fundamental idea that the Bucks — Antetokounmpo and Middleton and a host of marksmen — can create and exploit open space more effectively than any defense can deny it.

Defensively, the Bucks want to make you anxious. Although their defense is fairly basic (they, like almost every team, use drop coverages in the pick-and-roll to try to goad opponents into pull-up mid-range jumpers), their cohesiveness and collective athleticism neuters opposing teams. On the whole, they’ve perfected the rear-view contest, the art of pestering ball-handlers even after falling a step behind the play. In particular, point guard Eric Bledsoe, a member of last year’s all-defensive first-team, is a master of disobedience and disrupting the other team’s rhythm; he denies the smallest privileges, slinking around screens in lockstep with ball-handlers and making them feel the risk of every dribble. Bledsoe — and other guards like the indefatigable Donte Divencenzo — work in concert with Lopez, funnelling penetration toward the big man who compensates for his general slowness by being a ziggurat in the paint and allowing a miniscule 43.2 percent field goal percentage within six feet of the rim.

Antetokounmpo expertly flits between any and all roles, equally capable of guarding either end of the pick-and-roll. Against Lopez and Antetokounmpo, drivers face an untenable choice: settle for a tricky pull-up with a long-armed defender harassing you from behind or risk getting blocked so hard that people will laugh at you on Instagram. The Bucks’ three-point defense is a clear weakness, but they mitigate the extent of this damage by limiting success on corner threes. Still, the Bucks are so sturdy at the rim and coax offenses into so many unprofitable mid-rangers that they’re the league’s stingiest unit, spongy three-point defense and all.

If you haven’t realized the totality of the Bucks’ dominance, there’s a reason for that: they’re the Milwaukee Bucks. Whereas starrier franchises in Los Angeles and Houston and Philadelphia hog the public’s attention, a recent study by SLC Dunk revealed that, amongst major NBA Twitter accounts, a meager one percent of content focused on Cream City. Limited by their geography, the Bucks are very much a small-market team. Unlike the Knicks, one of the most valuable sports teams in the world by mere dint of playing in New York, the Milwaukees and Oklahoma Cities of the league have to weigh the merits of competitiveness and fan happiness against slightly increasing the profits of some sallow-skinned billionaire ghoul. In all fairness, the Bucks spent aggressively to resign Middleton and Lopez, but it’s also hard to imagine the Clippers or the Lakers letting a key contributor like Malcom Brogdon sign with a divisional rival, no matter the cost.

Antetokounmpo is set to enter unrestricted free agency in the summer of 2021, and this season has been undercut by slight pangs of unease as the future of the franchise coalesces. While it’s entirely baseless to suspect that Antetokounmpo wants to leave, there’s a reason that the one comparably sized city to win a title in the last 15 years only did so because LeBron James guilt-tripped himself into living in Cleveland. As such, this season is not just a battle for a ring, it’s a referendum on what’s actually possible for teams like the Bucks. The Heat and the Knicks have maneuvered to create cap space for Antetokounmpo and can offer lifestyles that Milwaukee never could. Can you get vomited on while stuck on a stalled subway in August in Milwaukee? Didn’t think so.

Conversely, the Bucks roster is remarkably talented and well-suited for Antetokounmpo. This is an organization that has grown in tandem with him, evolving from a Ramon Sessions-led never-ran into an undeniable force. If Antetokounmpo stays in Milwaukee, he’ll provide proof that the goals of the player-empowerment era aren’t billboards and power lunches at The Palm, but really the power to create comfort. By winning a championship, Milwaukee could be among the greatest teams of all time and potentially kickstart a dynasty. By keeping Antetokounmpo, Milwaukee could score the greatest victory for the NBA’s underclass and escape that liminal space of potential, at once wasted and fulfilled. The wrestling for Antetokounmpo and the soul of small-market teams everywhere won’t actually begin for 18 months, but this year might be the Bucks best chance to land a finishing move. 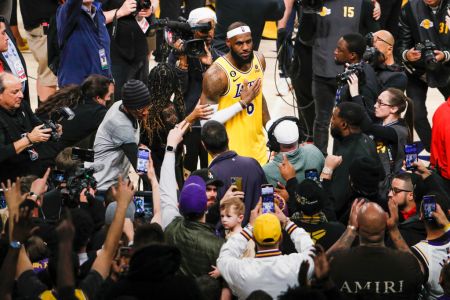 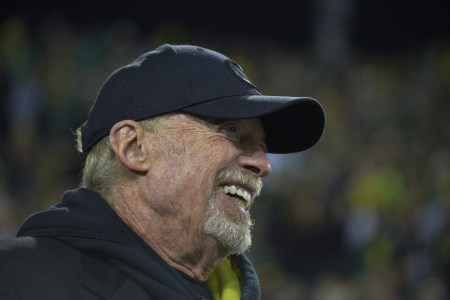