Why didn't we think to bring these two together before?
BBQ Ramen Tatsu-ya
By Kevin Gray @kevinrgray

Keeping track of every restaurant opening across Texas requires a robust spreadsheet and countless hours of your time. So, don’t do that. Instead, add a handful of new options to your to-eat list each month from our recommendations, and you can reasonably convene for dinner and drinks at some of the most exciting spots in the state.

Newcomers this fall include a barbecue-laced ramen shop from an Austin favorite, a gorgeous rooftop with prime views and dry-aged steaks, a New York import with Australian roots that’s now open in Dallas and a few more compelling reasons to leave the house.

Austin’s new hotel, The Loren at Lady Bird Lake, gives the city an additional 108 rooms right on the water. But more important for this exercise is Nido, the rooftop restaurant situated eight floors up, with views of the lake and downtown Austin. Nido serves breakfast, lunch, dinner and weekend brunch, and the menu highlights local ingredients. Dishes include sweet corn gazpacho, octopus carpaccio, Texas redfish, lamb ribs and a dry-aged ribeye for two. The indoor-outdoor space has a bar, dining room and terrace, so there are several good spots to sip a sparkling wine or tequila cocktail as you watch the world go by.

Isla & Co. has restaurants in Brooklyn, Manhattan and Connecticut, and now they’ve moved south to the lively Bishop Arts District in Dallas. The menu comes from Executive Chef Matt Foley, formerly of two Michelin-starred Marea in NYC, and is inspired by Australian coastal cuisine (the owner originally hails from Perth in Western Australia). Brunch is served daily and includes a bacon-egg-and-cheese Brekkie Roll, smoked salmon Benedict, brioche French toast and a burger, while dinner brings oysters, fish and chips, spicy shrimp vodka rigatoni and a half chicken with seasonal vegetables, spiced yogurt and salsa macha. The bar is pouring natural and organic wines, craft beers and signature cocktails, like the Wizard of Aus, made with Australian whiskey, lemon juice, sugar, egg white and a Shiraz wine float. 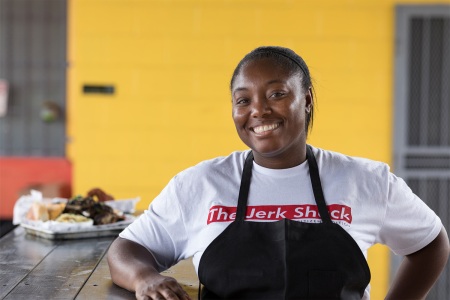 Follow her lead to breakfast sandwiches, perfect carnitas and “Tin Can Nachos”

Dea, latest salvo from Tracy Rathbun and Lynae Fearing — the duo behind Shinsei and Lovers Seafood and Market — is a polished, two-story space with a dining room and bar downstairs and a cozy whiskey bar upstairs. The restaurant serves European coastal cuisine inspired by cities like Naples, Palermo, Positano and Valencia, which translates to wood-roasted bone marrow, pappardelle bolognese, a daily risotto, scallops with white bean cassoulet and bistecca alla fiorentina. The wine list features some tried-and-true American favorites alongside lesser-known varietals from Italy and Greece.

Killer Noodle hails from Los Angeles, where it’s been serving spicy bowls of tantanmen, a Japanese version of a Sichuan noodle dish, since 2017. This just-opened location in Houston’s Heights neighborhood marks the restaurant’s first Texas outpost. It serves a few appetizers, including karaage, takoyaki and spicy pork buns, but you’re here for the noodles. Those are available in three styles: the Original has tofu, ground pork and black pepper; Tokyo is richer and creamier, with peanut and sesame flavors; and Downtown features a bright kick of vinegar and chili. After choosing your ramen, you’ll dictate which of the five spice levels you can handle. Those range from no spice to medium to “killer,” which should be pretty self-explanatory.