What Voting and Elections Look Like Around The World

As Americans head to the polls, we look at what civic duty looks like worldwide.

Voting is one of the foundations of American democracy, but voter turnout is always a highly contentious topic. As this year’s midterms draw near, there are serious questions on everyone’s mind: Will young people actually turn out to vote? Will the”blue wave” that Democrats keep talking about gain them control of the House for the first time since 2011? Is the country about to break a record for successful women candidates?

Quartz writes that in the United States, presidential election participation is pretty high: Over six in 10 eligible Americans voted in the last three quadrennial elections. But in midterm elections, like this year, only four in ten voters actually make their voices heard. This means half the time, control of the U.S. congress is decided by a minority of voters. There are, of course, major and minor voting issues that come up every election, including problems with polling machines, laws that try to prevent certain groups of people from voting, or just general confusion about the process.

And of course, voting is not limited to the United States. Elections happen around the world. But according to the International Institute for Democracy and Electoral Assistance, voter turnout has been declining across the globe since the beginning of the 1990s. There has, however, been a rise in other forms of citizen activism, like mass protests, political occupations, and increased use of social media.

To combat citizen apathy, voting has been made mandatory in 22 countries, such as Australia, where failing to exercise your franchise will get you fined. In 2014, The New York Times reported that more than 85 percent of the voters in Australia, Belgium and Bolivia turned out to vote. All three countries are among the roughly two dozen that make voting compulsory.

Then there are the many countries were voting is limited or not allowed at all. United Arab Emirates, Lebanon and Brueni all have limited suffrage, according to Mic. In Guatemala and the Dominican Republic, members of the armed forces cannot vote.

In honor of the midterm elections, we look at the some photographs of what voting looks like around the world. 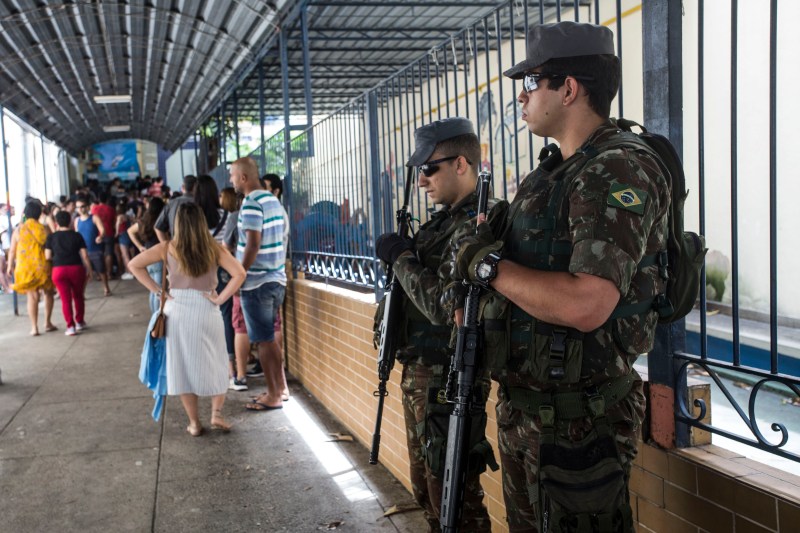 Brazilian soldiers stand guard as people wait to vote, at a polling station in Rio de Janeiro, Brazil during the second round of the presidential elections, on October 28, 2018. (DANIEL RAMALHO/AFP/Getty Images)
AFP/Getty Images

The president in Brazil is elected to a four-year term by absolute majority vote through a two-round system. Meanwhile, the country’s National Congress has two chambers. One, the Chamber of Deputies, has 513 members, elected to a four-year term by proportional representation. The second, the Federal Senate, has 81 members, elected to an eight-year term, but there are elections every four years for alternatively one-third and two-third of the legislative seats.

On Oct. 28, Brazil elected Jair Bolsonaro, a longtime far-right politician who has been likened to Donald Trump. 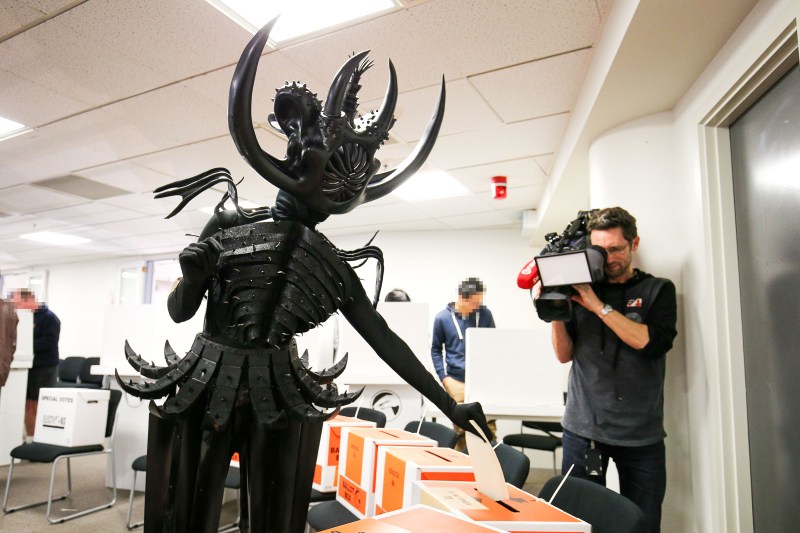 New Zealand has been using a mixed-member proportional electoral system since 1996 — this means voters get two votes: one to decide the representative for their single-seat constituency, and one for a political party.

The country has a single-house legislature, the House of Representatives, which usually has 120 members. The country was the first to give women the right to vote, in 1893.

The most recent general election took place in September 2017, and it determined the 52nd New Zealand Parliament. 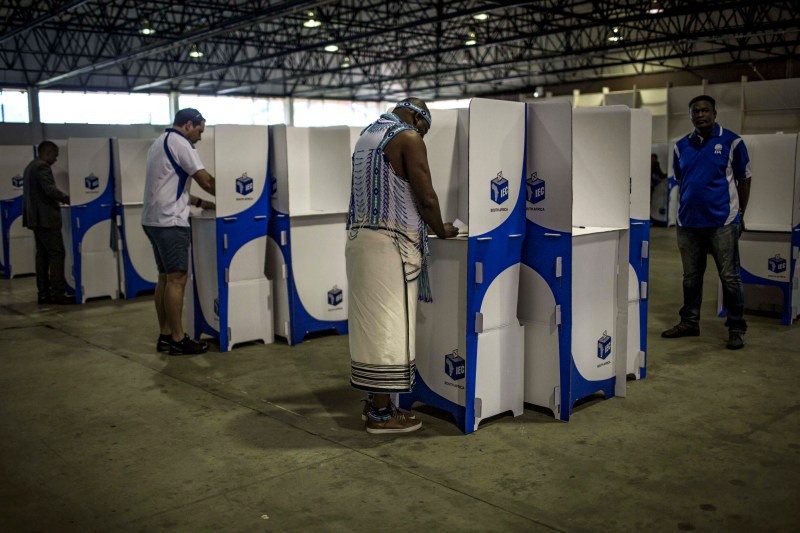 In 1994, South Africans of all races took place in the first fully democratic elections after the racist apartheid government finally ended. The new nation instead enshrined principles like “universal adult suffrage, a national common voters roll, regular elections and a multi-party system of democratic government” in its 1996 Constitution.

Elections in South Africa are held for National Assembly, provincial legislatures, and municipal councils. Elections follow a five-year cycle, and parties are represented in proportion to their electoral support. 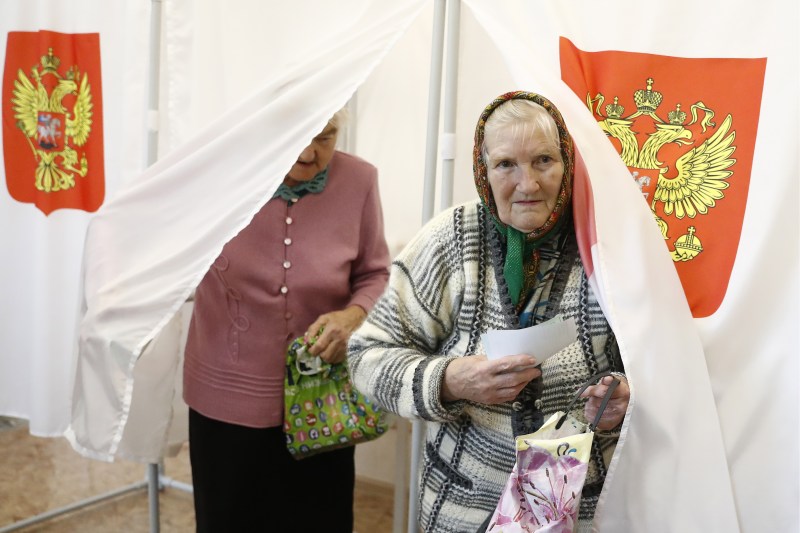 Pensioners visit a polling station to vote in the second round of the 2018 Russian gubernatorial election in the Vladimir Region. (Artyom GeodakyanTASS via Getty Images)
Artyom Geodakyan/TASS

Russia has a Federal Assembly, which is made up of two chambers. The State Duma has 450 members, elected for five-year terms, using a system of proportional representation, which means parties gain a percentage of seats proportional to the amount of national votes they receive. The  country’s other chamber, the Federation Council or Senate, is not directly elected. Instead, each of the 85 federal subjects of Russia—the country’s top-level political sub-states—sends two delegates to the Senate, for a total of 170 members.

The country also elects a president as head of state, while an appointed Prime Minister functions much like a vice president. Now, the president of Russia is elected to six-year terms by popular vote, but up until 2012, presidential terms were four years. The most recent presidential elections were held on March 18, 2018, and incumbent Vladimir Putin won reelection for his second consecutive term in office with 77 percent of the vote. (Putin had previously won two terms as president in office from 2000 to 2008 ; he served as prime minister from 2008 to 2012.) 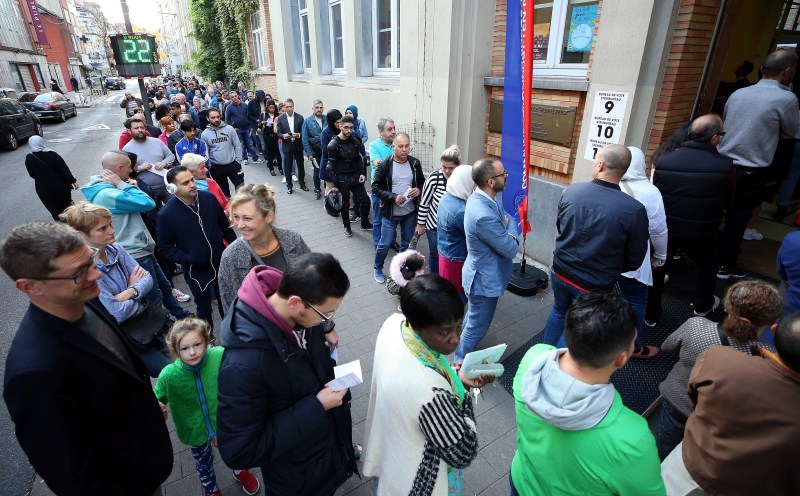 People stand in line to cast their votes for the local elections in Brussels, Belgium on October 14, 2018. (Dursun Aydemir/Anadolu Agency/Getty Images)
Getty Images

Belgium is one of the countries with compulsory voter laws, so Belgians who are 18-years-old or over and registered non-Belgian voters are obligated to vote in elections. Those who fail to show up at their polling station can face prosecution or a fine. On top of that, if Belgians fail to vote in four elections, they can lose the right to vote for 10 years. 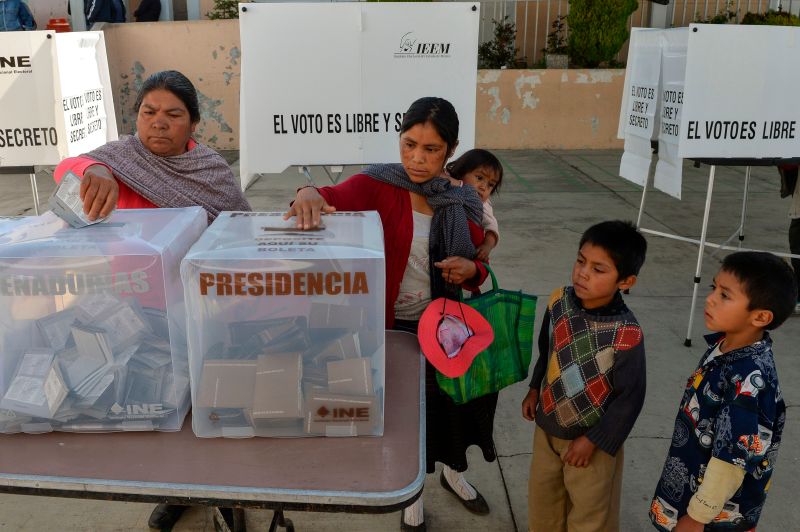 Elections are held in Mexico to determine the president and the legislature. The President of Mexico is elected for a single, six-year term by the people, and no president can serve more than one term in office.

The Congress of the Union has two chambers. The Chamber of Deputies has 500 members, each elected for a three-year term. The Chamber of Senators has 128 members, elected for a six-year term. Mexico has a multi-party system, with three dominant political parties and a number of smaller ones. General elections were held in Mexico on July 1, 2018, and voters elected a new President of Mexico, Andrés Manuel López Obrador of the coalition party National Regeneration Movement. 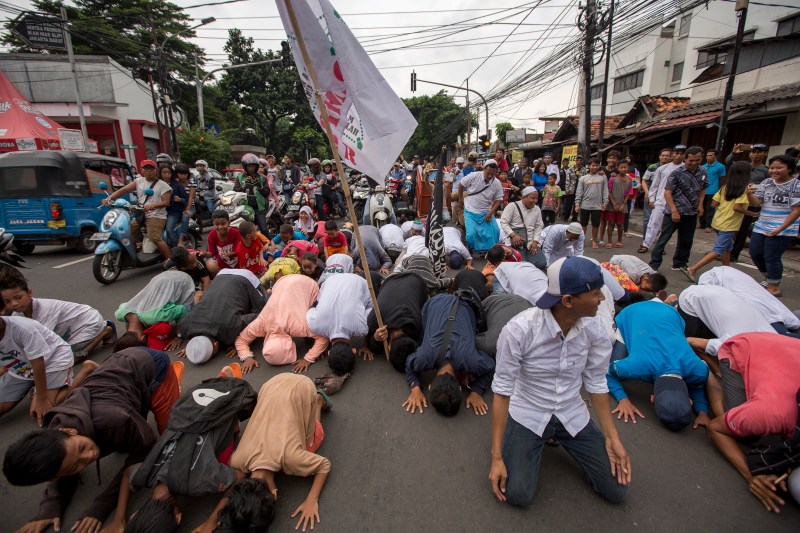 Indonesian youths in a heavily Islamic neighborhood pray in the main street after quick count results showed their candidate decisively ahead of the incumbent on April 19, 2017 in Jakarta, Indonesia. (Ed Wray/Getty Images)
Getty Images

The Indonesian presidency was first established during the formation of the 1945 Constitution. The president is both head of state and head of government of a multi-party system. But for much of the country’s history since 1945, presidents have ruled for extended periods while delegitimizing political opposition. (Two men, Presidents Sukarno and Suharto, led the country between 1945 and 1998.)  In May 1998, riots in Indonesia finally precipitated President Suharto’s resignation. Following this, several amendments were made to the Constitution of Indonesia which resulted in changes to all branches of government. In 2004, the country directly elected its president for the first time (prior to this, the president and vice president were elected by the nation’s legislature).

Local elections were most recently held in Indonesia on June 27. Joko Widodo is currently serving as the seventh president of Indonesia, after winning his first term in 2014. The presidential term of office is five years and the constitution allows for a president to be consecutively re-elected only once. 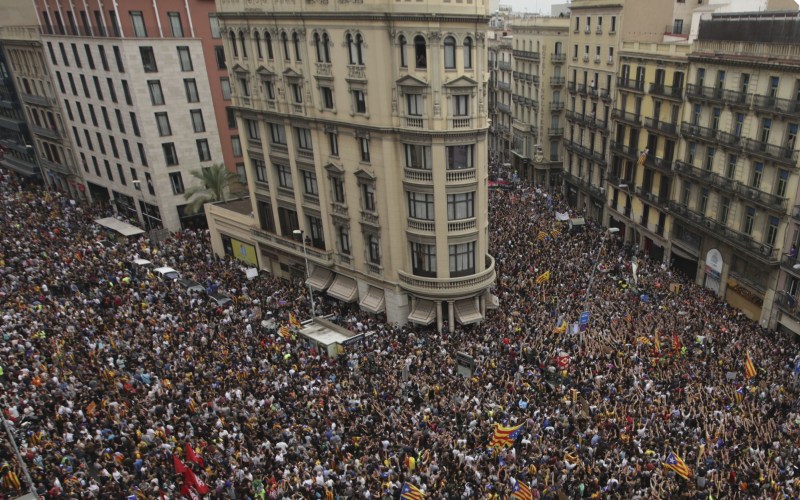 In 2017, more than 2.2 million people turned out to vote in an referendum in Catalonia, a region in the northeast of Spain that seeks independence. The Catalonian regional government reported that 90 percent of voters favored a split from Madrid. However, the turnout was low—only around 42 percent of the voter roll—in part, because Spain’s highest court had ruled the vote illegal under the Spanish constitution. Madrid cited judicial authority and flooded Catalonia with thousands of national police in advance of the vote, and officers seized millions of ballot papers. The Spanish government also sealed schools and other buildings that were being used as polling stations for the referendum. 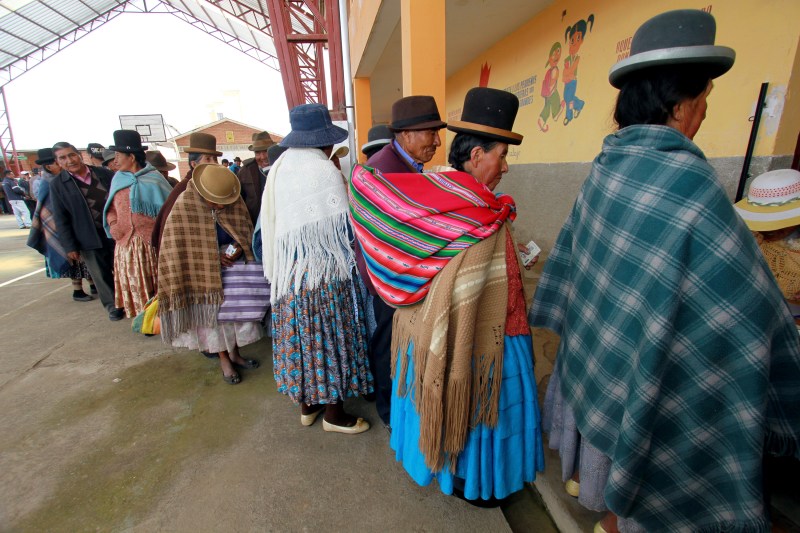 All Bolivian citizens at least 21-years-old, or eighteen if married, are guaranteed the right to vote. In addition, Bolivia also requires by law that its citizens vote in every election.  All citizens must register with neighborhood poll notaries established prior to an election. Bolivia elects a national head of state—the president—as well as a legislature. 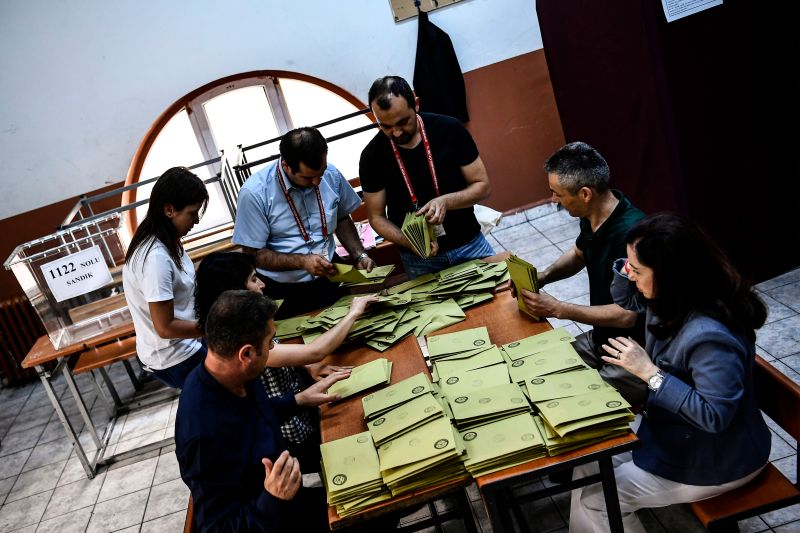 This year was the first year that presidential and parliamentary polls were held simultaneously in Turkey, a consequence of last year’s constitutional changes that are tranforming the country’s parliamentary system to an executive presidential one, according to Al Jazeera. The changes will take place after the next round of elections and will greatly expand the subsequent president’s power. In what is a significant step backwards for Turkish democracy, the new government structure will also abolish the prime ministry as well as remove the monitoring role of parliament, and give the presidential office the power to appoint vice presidents, ministers, high-level officials and senior judges.

Rooftop Tents Are Suddenly Cool. You Still Shouldn't Buy One.
First Drive: The 2022 BMW X3 M40i Proves the M Division Is Inescapable
A Lesser-Known Mexican Spirit, Sotol, Is Fast Becoming a Texas Sensation
The 50 Best Valentine’s Day Gifts for Her
It Was Impossible to Tell Whether Meat Loaf Was for Real