Inside the Room Where Roseanne Barr Returned

In her first public appearance, the comedian says her controversial tweet was motivated by faith, not racism.

Roseanne is onstage smoking an e-cigarette. She says Sean Hannity gave it to her.

It’s 9 p.m. on Manhattan’s Upper West Side and she’s just come from filming a segment for his Fox News program. The inside of Stand Up NY — a comedy club known for offering a platform to controversial figures like Ann Coulter and Milo Yiannopolis — is uncomfortably full, with media lining the back and sides of the room while patrons sit scattered among them and closer to the stage. Everyone is gathered for “Barr’d,” a live podcast recording in which Roseanne will appear in public for the first time since she sent a racist tweet about former Obama advisor Valerie Jarrett. Her May 29th post — “muslim brotherhood & planet of the apes had a baby=vj” —  ended the reboot of her namesake show.

But tonight she’ll insist on multiple occasions that she didn’t mean it as racist — she meant it in defense of Jewish people. Rabbi Shmuley Boteach, a longtime friend of Roseanne’s and the first to interview her after the scandal, introduces her to the crowd as a “Jewish celebrity who takes her Jewishness very seriously.” It’s his podcast they’re recording this for, and throughout the hour that they speak, Roseanne fluctuates between saying she’s “done wrong,” and doubling-down on claims that she didn’t mean the tweet as racist — she was criticizing Jarrett for the Obama-era agreement that limits Iran’s nuclear program. 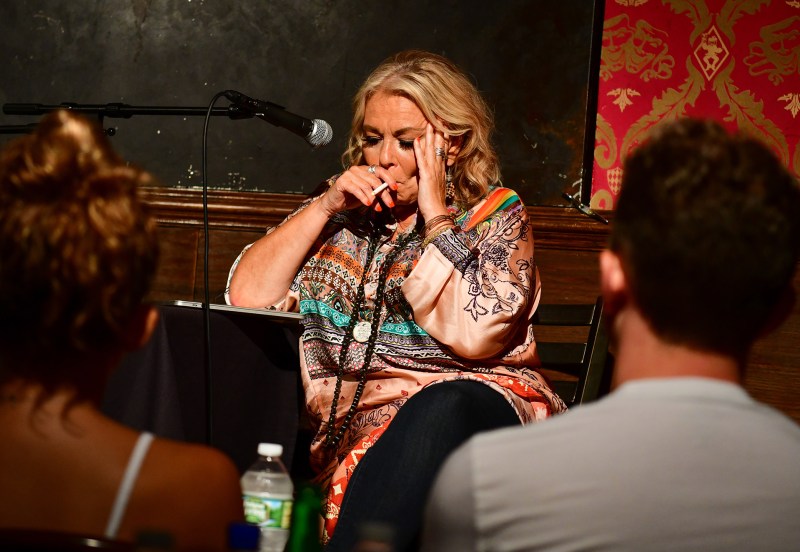 Somewhat incoherently, she says of the aftermath: “[I was] feeling terrible that people would think that I would say that, that I would say what they said I said, which isn’t what I said, at the height of my fame and power, that I would say such a stupid thing as they interpreted it to be, which it is not.” She continued: “They’re doing me wrong, but I’ve done wrong. There’s a lot of layers to it…you have to be very self reflective and ask God for help. I needed God to help me because I couldn’t figure it out.

“It was terrible, and depressing, and the end of the world, and my life’s work.”

Boteach later attempts to clarify what exactly she means.

“You apologized to [Jarrett] because you’d recognized that you had wronged her. Is that right?” Boteach asks.

“Well, I recognize that she thinks I wronged her,” Roseanne replies. “I’m sorry that anyone thought that that was a racist and not a political tweet, because it was in fact a political tweet and not a racist tweet whatsoever. I can talk about it till I’m blue in the face and they’re never going to accept it, and I accept that.”

The wide-ranging conversation resembles a religious sermon at times, in which people from the audience clap enthusiastically or call out their support when Roseanne or Rabbi Boteach discuss the importance of forgiveness or the ongoing persecution of Jewish people. But Roseanne is clear in her belief that her comments were misinterpreted, and voices her belief that her show was cancelled in part because she voted for President Trump, to the applause of many members in the audience.

“All my friends said, ‘your mistake was to apologize to the Left because when they see blood in the water, they’re going to come until you’re dead.’ And I think that’s kind of true,” she says.

When the show wraps, attendees filing out of the room discuss what they’ve seen and say she “sounded like she was on something at first.” Roseanne’s clarity is a concern for friends of hers in Hollywood, including Jimmy Kimmel, who came to her defense in early June.

“What @TheRealRoseanne said is indefensible, but angrily attacking a woman who is obviously not well does no good for anyone. Please take a breath and remember that mental health issues are real,” Kimmel said.

What @TheRealRoseanne said is indefensible, but angrily attacking a woman who is obviously not well does no good for anyone. Please take a breath and remember that mental health issues are real. The Roseanne I know could probably use some compassion and help right now.

Outside, New Yorkers tell RealClearLife that they found Roseanne “refreshing” and “authentic.”

“She was trying to communicate her truth,” Dave, who declined to give his last name because he was initially hesitant to speak on the record, says. “I don’t believe she meant to hurt anyone, I think that definitely came through.”

Saying he didn’t think her tweet was racist but “100%” could see why people thought it was, Dave says he believes “in second chances and apologies.”

“I think people are very quick to jump on something that fulfills their own point of view. I think we’re living in a very polarizing country right now, people are looking to jump and act without really giving things much thought, and unfortunately it’s where we are. People are quick to judge.”

Kelly Quelia, a lifelong New Yorker who came to see the show from Washington Heights, says she’s always been a fan of Roseanne’s.

“As a black woman, I know for a fact that Jews are the ones — and I wanted to say it [inside] — they started the NAACP,” Quelia says.

“White people call black people monkeys and that’s offensive,” she adds. “If she meant it in that matter, she’s doing the very thing that we’re trying to stop people doing, but I don’t know,” she says, noting that she sometimes doesn’t trust what she sees on the news because it “can be tricky.”

“It was interesting to hear. I really believe what she says about not being a racist.”

Listen to the podcast in its entirety here, and decide for yourself.