AFGHANISTAN - AUGUST 20: (JAPAN OUT) (VIDEO CAPTURE) Osama Bin Laden, the Saudi millionaire and fugitive leader of the terrorist group al Qaeda, explains why he has declared a "jihad" or holy war against the United States on August 20, 1998 from a cave hideout somewhere in Afghanistan. Bin Laden is thought to be the mastermind behind the September 11, 2001 terrorist attacks on New York and Washington D.C. (Photo by CNN via Getty Images)
Getty Images
By Evan Bleier @itishowitis

As part of its “Rewards for Justice” program, the U.S. government has offered a $1 million reward for information leading to the capture of Hamza Bin Laden, Osama Bin Laden’s son.

Hamza, thought to be about 30 years old, was with his father in Afghanistan before the September 11 attacks and spent time with him in Pakistan afterward. The government believes he is emerging as a key al Qaeda leader.

“He has released audio and video messages on the Internet, calling on his followers to launch attacks against the United States and its Western allies, and he has threatened attacks against the United States in revenge for the May 2011 killing of his father by U.S. military forces,” according to the RFJ reward page. “Osama bin Laden’s letters seized from the Abbottabad, Pakistan compound where bin Laden was killed indicate that he was grooming Hamza to replace him as leader of al-Qa’ida.” 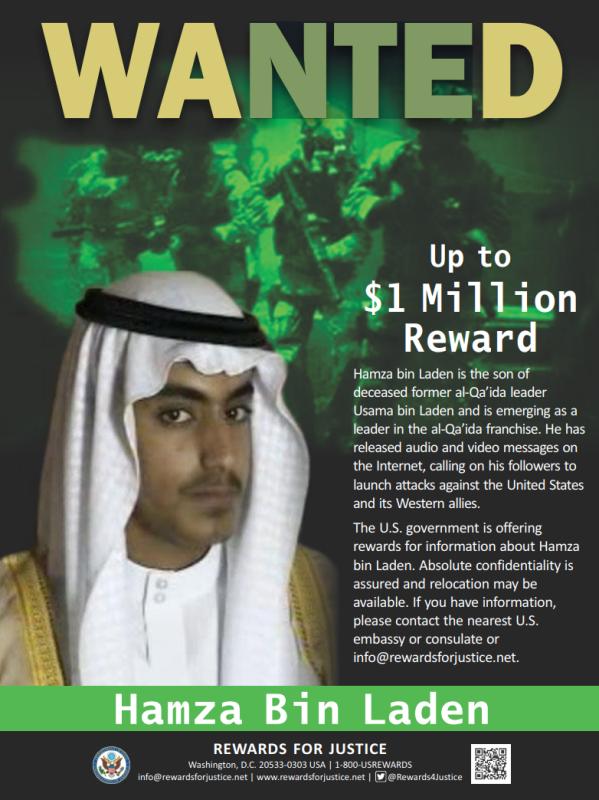 The U.S. offers a $1 million reward for Information on Hamza Bin Laden. (Rewards for Justice)

In the wake of the reward offer, Saudi Arabia announced Friday it had revoked the citizenship of Hamza.

Saudi Arabia similarly stripped his father’s citizenship in 1994 while he was living in exile in Sudan when Hamza was just a child.