Singer John Lydon of the Sex Pistols attends the Los Angeles premiere of the EPIX Original Docu-Series "PUNK" at SIR on March 04, 2019 in Los Angeles, California. (Photo by Michael Tullberg/FilmMagic)
By Tim Sommer

Imagine your eyes scanning the sky. Jaw tilted upwards, you search horizon to horizon. Imagine you do this each of the 29,208 days of your life, from crib to crypt.

Imagine your eyes scanning the sky, horizon to horizon, each of the 29,208 nights of your life.

Then conjure the scope and majesty of all those skies. Add them all up together, laying them end on end, on top of each other, one after the other.

Imagine all these skies you have seen! Imagine their size!

Now imagine all the skies seen in a similar fashion by all your ancestors. Imagine them looking up at the sky every night and day of their life. Add these to the quilt of skies you have seen in your life.

Now, imagine the shadow cast by your eyelash on a moon-less night. Imagine the size of this shadow. This tiny speck of a shadow represents our life, against the great mist and spray of history.

So, honestly, I cannot get myself too worked up about a recent, well-publicized public spat about who and who isn’t punk rock.

A week ago at a panel discussion in Hollywood following the screening of EPIX’s new documentary about punk rock, three major names in the story of that genre — John Lydon, Marky Ramone, and Henry Rollins — had a very public throw-down in which they poked holes in the water balloons of each other’s credentials and credibility.

At the teaser premier of a new series on @epix called #punk I truly saw a moment of punk rock inception. Trust me when I say this doc will be worth your time! The age old debate of #sexpistols vs #theramones argued by the actual members ?. This was an unexpected addition to my #bucketlist topped off with @machinegunkelly walking out after what seemed like the 100th interruption. #henryrollins @officialduffmckagan @johnvarvatos @iggypopofficial

They are each wrong, and they are all right.

Most of all, each of these elders is above criticism.

Let us start with Marky Ramone.

Marc Steven Bell didn’t join the Ramones until after their best and most historic work was already done, and their historic template was already set. He is also, inarguably, the fifth most important Ramone.

But Marc Bell did the time, put in the work, and was the third longest serving member of one of the fundamental pop acts of the last century.

Now, that in and of itself would be enough. But there’s more — and here is the primary reason I want to roll out the red safety-pin carpet under Mr. Bell/Ramone’s feet and get down, slowly, on my aging knees and go, “Salaam, salaam, hey ho, hey ho”:

I heard him play Sham 69 on the radio. 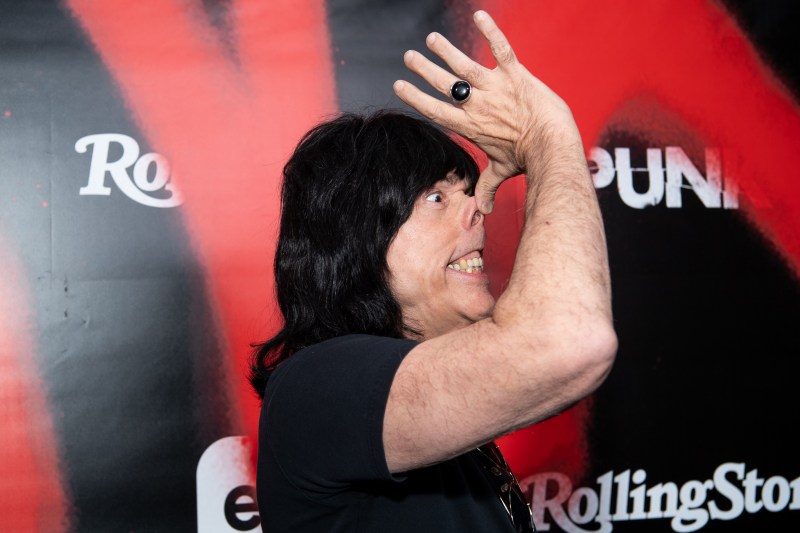 Do you know how freaking rare that is?

See, for reasons that totally bloody mystify me, there’s very little worth listening to in the entire Sirius XM Universe (I mean, unless you like the Beatles, a lot, I mean so very, very much, to the exclusion of nearly anything else). Oh, of course Sirius XM is good for a song here and there, and there are some thoroughly decent channels, too. For instance, the 40s Junction channel is a honking hoot (though like all of the networks decade-themed channels, prone to severe repetition); the Francophone Country Pop channel is consistently amazing, ripe with slow, simple, moody delights that make you feel like you’ve stumbled into Hope Sandoval’s opium stash; if you catch 50s on 5 at the right time of day, you can hear some amazing rarities in a Garden of Greaseball Delight; and the Deep Tracks classic rock channel is so committed to album-only obscurity that it will consistently cause even a geek like myself to go “WhaaaaaTheFuhhhhh…”

But aside from that, Sirius XM seems like such a total waste of time, space and opportunity that it makes me want to growl.

However, Marky Ramone has a show on Sirius XM’s First Wave channel, and he plays true thrwumping, thwamming, roaring, soaring punk rock. It is the only place in the entire Rainbow of Low-to-Middling Expectations that is Sirius XM where you will hear true effing Punk Rock. Yeh, Sirius XM will tell you they play Punk Rock, but virtually all of the time, what Sirius XM calls “Punk Rock,” I, Tim Sommer, call “Hot Topic music that sounds like the Dickies produced by Mutt Lange.”

For this alone — for bucking the ignorance, predictability and false bravado of Sirius XM’s phony freedom — I grant Marky Ramone full punk rock sainthood, and remove him from any challenge to his credibility, credentials, or sage-hood.

Let us also wrap a Hoodie of Exemption around Henry Rollins.

I am no great fan of Rollins. I think, arguably, that he’s the third most interesting Black Flag vocalist (after Keith Morris and Dez Cadena). But man, he puts in the time, he does the work, he shakes the hands, and he folds his arms menacingly and simultaneously smiles/frowns in a very convincing manner that makes me want to say, “You, Sir, are the white Shemar Moore.” 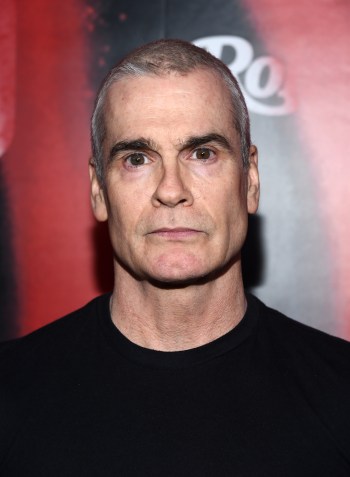 Henry Rollins arrives at the premiere of Epix’s “Punk” at SIR on March 04, 2019 in Los Angeles, California. (Photo by Amanda Edwards/WireImage)
WireImage

Far more importantly, Rollins was a member of Black Flag during the days in the first half of the 1980s when they literally defined what it meant to be an alternative music touring act, and they taught every band in America how to build a career one fan and one t-shirt at a time.

Every band that followed in Black Flag’s wake — from R.E.M. to Nirvana and many, many in between — were just driving their vans in the tire-ruts already created by Black Flag. Black Flag proved that you could make a living (and a legend) by hauling your ass into tiny clubs all over America, saving pennies and relieving yourselves in Sunoco Station bathrooms, and getting on that stage again and again and again. And doing it until those four fans had become eight, and those eight had become 48, and those 48 had become 340, and on and on and on.

For doing the time, I mean really doing the time, for unflinchingly driving ten hours to put his face in front of a few dozen people, and for rewriting the entire idea of what it meant to be a hard-working alternative rock act, I pronounce Henry Rollins above judgment.

And finally, the third Stooge in this reality show pilot (which I would like to call “Violent is the Word for Punky”), is Mr. John Lydon.

John Lydon has a permanent exemption from this sort of bullsh*t. 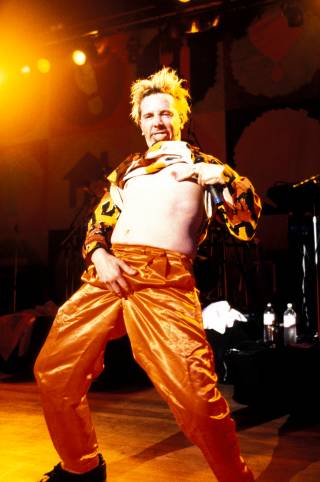 This is not only because he was a Sex Pistol, but far more significantly because between 1978 and 1982, Lydon showed us exactly what it meant to be a punk rocker. During that time, with Public Image Limited, Lydon made four of the most startling, original, invigorating, and truly Punk Effing Rock records of all time.

Punk Rock was — and should be — a bomb; a state of maximum minimalism; art and energy in constant motion; a distillation of the past and a renunciation of the past; and what you must do, in order to make yourself laugh, cry, or feel complete.

Most of all, what we call Punk Rock should be something that is in a constant state of motion and reinvention.

Punk rock does not stand still, although it may stand on one chord; it does not conform, though it may feel as natural or as inevitable as a dream of a highway hum heard from the crib (or as unnatural as the buzz drone of the refrigerator heard in the corner Bodega).

But Punk Rock keeps on moving, or it is dead in the water. If Punk Rock doesn’t keep moving, it’s f*cking Hot Topic.

Virtually no albums epitomize the real meaning of punk rock — we transcribe our hearts, we listen to no expectations, we thrill our souls, and we keep moving! — than the work Lydon’s PiL did on First Issue (1978), Metal Box/Second Edition (1979), Paris Au Printemps (1980), and Flowers of Romance (1981). These albums are the sound of courage, the sound of maximum minimalism, the sound of the silent bomb, the sound of Punk Rock.

Now, as long as I have your attention, let ol’ Tim tell you a little about Punk Rock.

Punk Rock, first and foremost, is an expression of what moves you, without the shadow of peer pressure. Punk Rock is the freedom to be yourself and have your own opinion, dream big dreams and love those dreams with all your heart, despite the naysayers.

Punk Rock is not a “sound.”

It is the idea of an unfettered, un-tethered imagination.

Punk Rock is about blowing it all up and putting it back together any damn way you want, any goddamn way that has the power to move you. If it moves you, there’s a very good chance it will move someone else.

You each have earned the right to be punks.

A Weekend at Joshua Tree, With a Case of Psychedelic Water

Meet the Hike 100, Winnebago’s Smallest, Most Adorable Camper Yet
The Official Uni Watch 2021-22 NBA Season Preview
A Weekend at Joshua Tree, With a Case of Psychedelic Water
Neil Patrick Harris on the Sweet Science of “Remixing” Negronis
Search for Brian Laundrie Leads to Confusion on the Appalachian Trail
The 55 Best Insults From “Succession,” Ranked

What Drives the Runners Who Participate in the Relay Race From Hell?
The Official Uni Watch 2021-22 NBA Season Preview
The Fitness Regimen That Got Daniel Craig Through Five James Bond Films
Apple Targets Music Fans and Creative Pros at Their Latest Product Launch
Should You Channel Travis Barker and Buy an Oval Engagement Ring?
END. Clothing's Mid-Season Sale Is One You Do Not Want to Miss
Burton's Best-Selling Shell Jacket Is 55% Off Today
Sony TVs and Headphones Are Up to 55% Off, Today Only
Review: The Bose QuietComfort 45 Is a Long-Awaited Update of a Classic

The 55 Best Insults From “Succession,” Ranked
The Myth of the Red Hot Chili Peppers Is Better Than the Band I Remember
10 Health Experts Name the One Smoothie They Can't Live Without
The Unusual Fruit That’s Growing on Your DC Commute
James Bond Didn’t Deserve Timothy Dalton