We’ll Never Really Get to Know Nicole Kidman, and That Is Why She’s Brilliant 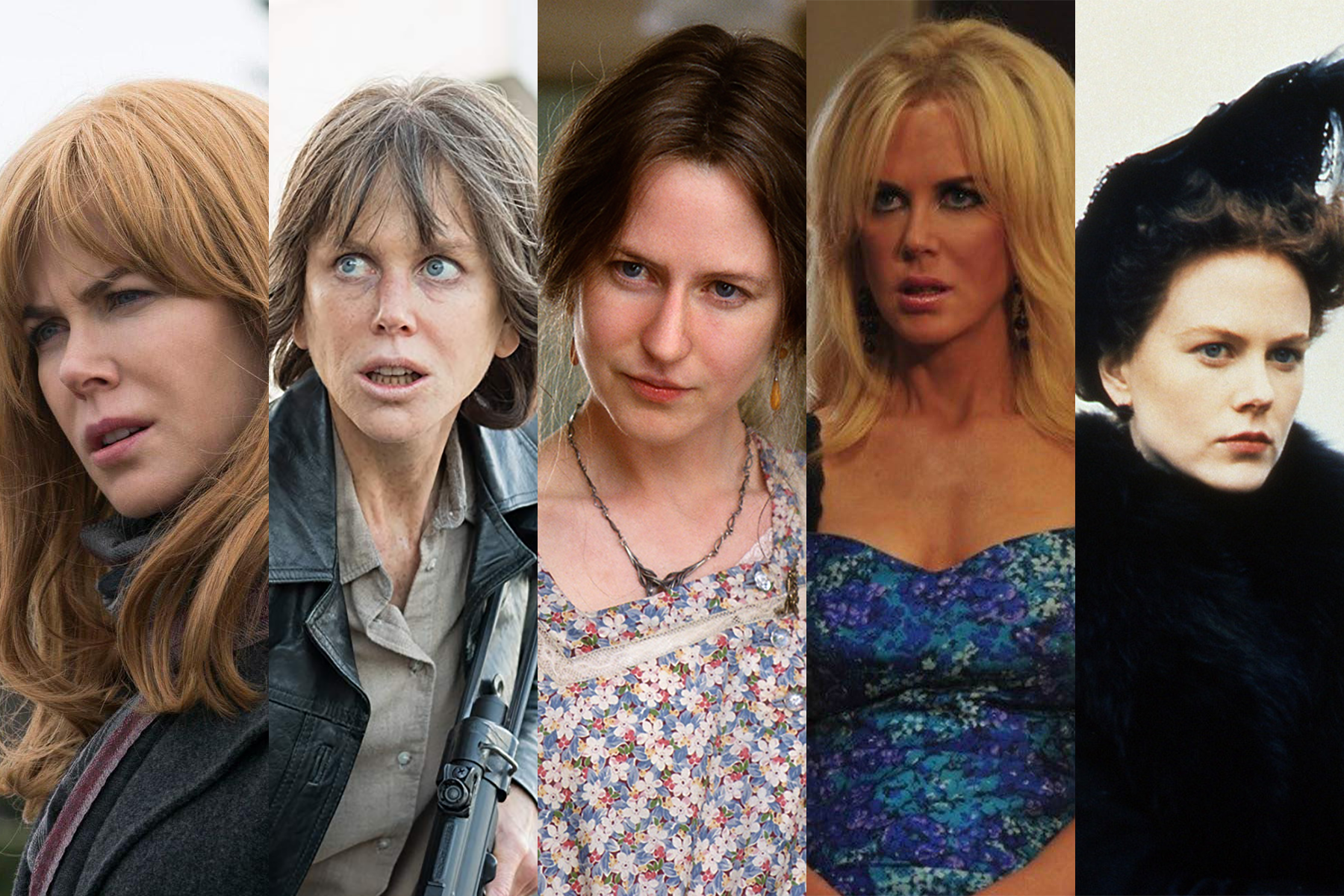 In the new season of Big Little Lies, Nicole Kidman’s widowed Celeste Wright goes tête-à-tête with her grieving mother-in-law, Mary Louise, an owlish woman insinuatingly played by Meryl Streep. Poor Celeste! So recently the victim of the sexual violence meted out to her by husband Perry (Alexander Skarsård), she now has to deal with the honed passive-aggressiveness of his doting mom, who pays little heed to Celeste’s accounts of Perry’s brutality.

Except for when Celeste was liberated by the opportunity to do some lawyering in Season One, she was for most of it a shadowy presence. Long in denial of her complicity in Perry’s pathological sadism, she finally acted on her need to protect herself and their twin boys in the last episode. She is lighter this time around — gray instead of black — though worryingly prone to nightmares and using old videos of Perry as pornography.

Kidman’s ability to show subtle emotional gradations in the role and her lock on psychological accuracy is one compelling reason to watch Big Little Lies. Watching Celeste and Mary Louise fence is another. Kidman and Streep are so invested in these parts that we suspend disbelief for each episode’s duration. There’s time enough afterwards to assimilate the pleasure of watching Kidman and Streep acting together. (They both appeared in 2002’s The Hours — Kidman’s Virginia Woolf won her an Oscar — but without sharing scenes.)

Since Streep is universally acknowledged as the “greatest” Hollywood actress of our time — an unmeasurable notion unless you think in terms of Oscar wins — where does that leave Kidman? Does describing her as Hollywood’s top female movie star, which she has been for nearly a quarter of a century, demean her, given that stardom is more about glamour, personality and publicity than it is about talent? “Greatest” and “top” are reductive constructs. Better to ask why Nicole Kidman’s work matters.

Here is a proposition. More than any other high-profile modern actress in English-language movies, Kidman has made relatable characters who are polarized extremes of feminine victimhood or aggression somehow ambiguous. Ambiguity is key because it admits the possibility of moral equivocation or failure. Kidman’s most memorable characters are unreadable. As a result, the arc of her career is less a rainbow than a multivalent parabola, not least since it has spanned over 30 years of post-feminist warfare between the sexes.

Thus, she went from playing the husband-murdering TV weather reporter Suzanne Stone in To Die For (1995) to the trapped Isabel Archer in A Portrait of a Lady (1996). Kidman’s performances in these roles not only certified her stardom, but demonstrated her capacity to confound us by playing women who are moral opposites and relate so differently to their sexuality.

In 1993’s Malice, Kidman had played a treacherous wife, a con-woman, and a killer who nastily tells Alec Baldwin’s corrupt surgeon to “Take me upstairs and fuck me.” It was a shock, but this was old-school femme fatale-ery compared with Suzanne’s exultant seductiveness. Her flush-cheeked, fourth-wall-breaking confessional monologue was a brilliant advertisement for Kidman’s own sexiness and ambition. A trio of pliant high-schoolers fall under Suzanne’s sway as she plots the demise of her dumb husband (Matt Dillon), but there are moments in the movie when it’s hard to gauge what she’s thinking or feeling. Does she despise her cretinous teen lover (Joaquin Phoenix) as the dupe he is, or is she just that little bit into the sex? If not, why does she dance so freely for him, flipping her mini-dress in the car headlights? Kidman keeps us guessing, and makes Suzanne so sympathetic that it’s impossible to regard her as evil.

So next she was Isabel, the quintessential Jamesian modern woman of the 1870s, who prides herself on her self-reliance and independence (“I shall probably never marry”). She is in tune with her desires and has her pick of suitors … until she picks the wrong one. Not half as worldly as she thinks she is, Isabel falls prey to the manipulative woman (Barbara Hershey) who steers her into marriage with the malign Gilbert Osmond (John Malkovich). She flees eventually to the dying man (Martin Donovan) she loves, but it’s unclear if she goes back to Gilbert or not. That unresolved ending may be a plot point, but it stems from the way Kidman played Isabel, truly an innocent abroad.

It’s even harder, at first glance, to reconcile the same actress playing both Virginia Woolf and Charlotte Bless in The Paperboy (2012). Woolf is the modernist novelist and feminist icon. Charlotte is a prison groupie from Alabama, the riskiest role Kidman has taken, and a warmer and funnier southerner than her steel magnolia in The Beguiled (2017) or her tin one in Cold Mountain (2003).

Yet there is a common ingredient in Virginia and Charlotte: the damage inflicted on them by male desire. It’s not mentioned in The Hours, but Woolf was crushed by sexual abuse in adolescence. Though comfortable in her trashy allure, Charlotte is unaware that it’s conditioned by misogyny, or that her yearning to love and live with an ex-con (John Cusack) is suicidal.

Whether famous, notorious, or everyday, there are women like Virginia, Charlotte, Isabel, Suzanne and Celeste everywhere. Kidman presumably chose to play them because they were rewarding from an acting perspective, but also because their stories touch cultural nerves. In creating viewer empathy for such women, she deters us from labeling them. Virginia should not be dismissed as neurasthenic anymore than Charlotte should be slut-shamed or regarded as a freak. She does, after all, kindly pee on Zac Efron’s chest after he’s stung by a jelly fish.

Time and again, Kidman asks us to suspend judgment on her characters and ponder what demons drive them. Erin Bell, her scuzzy, strung-out LAPD detective in Destroyer (2018), may be deft with an assault weapon, but for 17 years she’s danced to the tune of a trauma that lanced her with guilt and made her incapable of responsible motherhood.

Erin is nothing like Anna, the married ophthalmologist played by Kidman in The Killing of a Sacred Deer (2017), but note that both of them give handjobs in exchange for information. In Anna’s case, that indignity — or is it an act of rebellion? — tallies with her sexual servility to the alcoholic heart-surgeon husband (Colin Farrell) who looks so condescendingly on her profession. The boy who threatens this couple and their kids is the return of the repressed, as was the 10-year-old who, in Birth (2004), tells Kidman’s character, another trauma victim, that he is her deceased husband. Kidman is so elusive in the film that you wonder if she dreamed up the man-child to antagonize the bourgeois New York fiancé and family members who oppress her.

The more enigmatic Kidman is, the better she is, which is why she thrives more in independent movies and challenging TV serials like Big Little Lies and Top of the Lake: China Girl (2017) than in Hollywood showcases. What a career she has made; what dotty aunts and haughty dowagers must lie in her future. Long may Nicole Kidman leave questions unanswered — except concerning the psychological makeup of Celeste Wright’s next man, hopefully an angel.