New film by the "Get Out" Oscar winner asks us to face our secret shames.

Lupita Nyong'o in a still from the IMDB.com trailer of Jordan Peele's "Us" (IMDB)
By Stephen Whitty

Jordan Peele’s new film, Us,  out next week, is full of brutalized black bodies and patronizing white people, gruesome torture and unending pain, painful imprisonment and police who just don’t give a damn. It’s a great, gruesome, original horror film.

And a sobering statement.

The hugely talented Peele already proved, with Get Out, that he had Rod Serling’s skill for melding liberal social satire with pure pulp shocks. In that film, he imagined an America that had found the ultimate way of exploiting black people.

Now in this film he broadens that idea, examining everything from suburban seclusion and the black bourgeoisie to creeping conformity and cultural assimilation — all the while delivering a nasty thriller full of home-invasion shocks and trippy, surreal revelations. 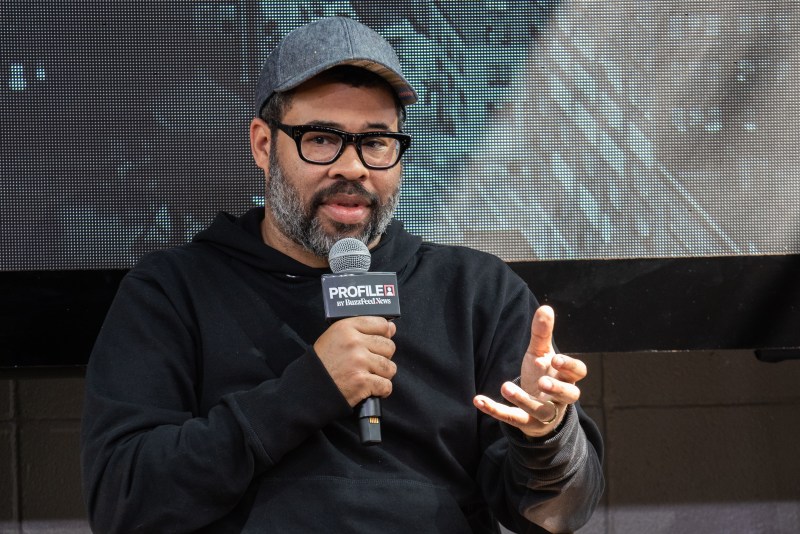 It feels really new and exciting. It’s also part of a welcome, African-American genre resurgence which includes an announced remake of the iconic Candyman, Lena Waithe’s planned Amazon series Them, HBO’s upcoming Lovecraft Country, the current Shudder documentary Horror Noire and Peele’s future gig as the host of a rebooted The Twilight Zone.

Of course African-Americans have always played an important, albeit overlooked, role in horror — a fact which shouldn’t be surprising.  People kidnapped and imprisoned? Terrorized and tortured? What are only sadistic clichés in slasher pictures have been real-life stories for blacks in America from the day they arrived.

“Black history is black horror,” one professor notes in Horror Noire, and a century of movies makes her point.

Yet for the first 50 years or so of American horror-film history, African-Americans were mostly kept off-screen. Eurocentric Gothic tales had no room for vampires, werewolves or ghosts of color. Mad doctors looking for an assistant would take almost anybody – lovesick hunchbacks, sadistic dwarfs, drooling psychopaths – except a black person.

Meanwhile studio films not only relegated blacks to bug-eyed comic relief, they even expunged them from their own fearsome folklore. Whenever a zombie story made it to the screen, who was the voodoo priest? A white man. When Egypt’s mummies creaked to life, who controlled them? White men.

When blackness did appear in classic horror, it was coded, almost subconscious. What was King Kong supposed to stand for – brought here in chains, ordered to entertain, and then destroyed by his love for a blonde woman? What was the true subject of movies like Murders in the Rue Morgue, Island of Lost Souls and Captive Wild Woman, with their paranoid warnings about impure blood and taboo sex?

All monsters are metaphors.

Which is why Night of the Living Dead was so revolutionary in 1968. Its hero – in fact, the only truly calm and capable person in the movie – is a black man. And not just a black man, but a proud and uncowed black man, who isn’t afraid to order white people around or defend himself against a mob of pale, murderous zombies.

And that he ends up paying for it — shot dead by a posse of good ol’ boys — only makes the message of this movie, released at the height of the country’s racial tensions, even clearer.

Other socially conscious films followed. Although 1972’s Blacula indulged in a few typical, homophobic stereotypes it also featured a prologue in which its main character, an African prince, travels to Europe to try to end the slave trade – and is punished with the curse of vampirism.  And 1973’s dreamy Ganja & Hess (later remade by Spike Lee as Da Sweet Blood of Jesus) used bloodsucking as a symbol for addiction.

But the same wave of inferior product that quickly swamped the blaxploitation genre eventually overwhelmed black horror, too, with films like Blackenstein and The Thing With Two Heads (“They transplanted a white bigot’s head onto a soul brother’s body!”) pushing everything into cheap farce. The brief era of socially-conscious, racially-diverse horror films was over.

Until, slowly it began to struggle back.

First, slasher movies started including African-Americans in their ensemble casts (even if they were usually the first to die). Then director John Carpenter pushed things further, elevating Keith David to genuine co-star in The Thing and They Live. Finally, in 1992, Candyman introduced a new monstrous icon – with a backstory rooted in racist violence. Films focused on more contemporary horrors, like Tales From the Hood, Bones and Hood of Horror eventually followed.

It’s a tradition that Peele is happy to both be a part of, and to push beyond.

Uncompromising and unapologetic, his films don’t waste time trying to make whites comfortable; plots don’t twist themselves into knots just to introduce some noble Caucasian savior in the third act.  There are exactly four white supporting characters in Us and, while they’re not as astoundingly, unremittingly villainous as the whites in Get Out, they’re not exactly color-blind heroes, either. Black folks are, as usual, on their own.

Yet Peele – who has a white mother, and a white wife – refuses to resort to knee-jerk, color-coded politics. Although Get Out focused on racial exploitation, Us takes a broader approach, to look at class itself. Its African-American main characters are a perfect, privileged, upscale family. Mom grew up taking fancy ballet lessons. Dad went to Howard. They have two homes – one a secluded, art-filled country place in expensive Northern California.

And then, one night, their little haven is invaded by four deadly strangers – who look exactly like them.

It’s a clever twist — a bit of Twilight Zone magic that suddenly makes the familiar fearsome – but it also widens and deepens Peele’s vision. Like Get Out, it’s another film about public personas, and questions of identity (masks are a recurring image). But it also digs even deeper, exploring personal advantage, and communal guilt. It demands everyone, of every race, ask themselves: How did I get here? Who had to be left behind so I could? And what do I owe them now?

We have met the enemy. And it is us.