John McEnroe of the United States serves during the Men's Singles Final match against Bjorn Borg at the Wimbledon Lawn Tennis Championship on 6 July 1980 at the All England Lawn Tennis and Croquet Club in Wimbledon in London, England. (Photo by Steve Powell/Getty Images)
By David Kiefaber 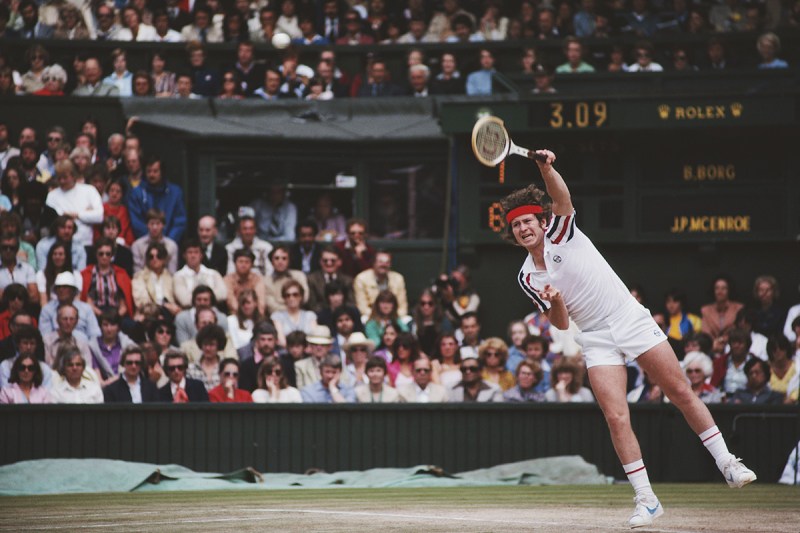 Eccentric actor/performance artist Shia LeBeouf is set to play tennis legend John McEnroe in Borg vs. McEnroe, a biopic centered on McEnroe’s rivalry with Björn Borg. Photos from the production have just been released, showing LeBeouf with the same tennis whites and unruly hair mop worn by McEnroe while battling Borg in the 1970s and early ’80s. (Between them, the pair won 18 Grand Slam singles titles; McEnroe picked up another 10 majors in doubles.)

These photos are the first to show LeBeouf in character. Anticipation has been building for his take on the notoriously short-tempered tennis star; LeBeouf has been seen reading McEnroe’s autobiography and hitting the courts for practice. As far as onscreen likenesses go, it’s not bad.

McEnroe himself, however, is a little concerned about possible inaccuracies. More than a little concerned: According to an interview with The Guardian, neither he nor Borg have been consulted about the movie at all. “It doesn’t seem like they are all that interested in talking with me,” he said, adding that “I don’t know how you can do it without ever meeting me.” He did concede LeBeouf was a potentially good casting choice: “Supposedly he’s crazy, so maybe that works.”

The Swedish/Icelandic actor Sverrir Gudnason will play Borg. The film is currently scheduled for a 2017 release.

Shia LaBeouf as Tennis Star John McEnroe in a new Biopic currently filming in Sweden… but does he look anything like McEnroe? pic.twitter.com/URpX7tsO5y