Meet the Gurkhas, Reported Guards of the Trump-Kim Summit

These Nepalese fighters are world-renowned for their steadfastness under fire, wicked knives.

If President Donald Trump and North Korean leader Kim Jong Un meet in Singapore on June 12 to talk nukes as planned, a fighting force with a centuries-long reputation for courage and fierceness will reportedly be watching their backs.

Authorities in Singapore are planning to call on the Gurkha Contingent of the local police to shoulder some of the summit security burden along with the leaders’ personal security, according to Reuters. The unit recently patrolled a different high-level international meeting that some saw as a dry run for the Trump-Kim meeting.

“They are among the best Singapore can offer,” Tim Huxley, an expert on Singapore security forces told the news service, “and I am sure they will be involved [in the Trump-Kim summit].”

The Singapore Police Force website describes the Gurkha Contingent as “a world-class security unit, tough, vigilant, and steadfast, fully trained and manned, and employing the traditional Gurkha to the best of his natural abilities, the Gurkha Contingent is to achieve operational success across the spectrum of para-military operations to help safeguard Singapore.”

Though they can serve in foreign police and military forces, the Gurkhas hail from mountainous Nepal, where they first made their name to Westerners in ferocious battles with British fighters with the East India Company back in the early 19th century. Then and now, they’re known for carrying a distinctive curved blade called a kukri which, according to custom, if unsheathed must draw blood before being put back. (Though these days it’s mostly used for cooking, according to the BBC.) 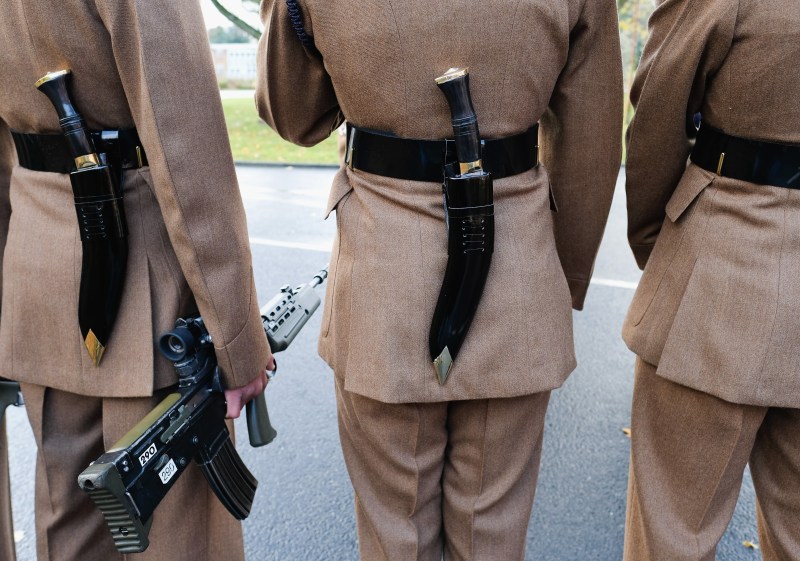 Final preparations are made by Gurkha recruits with their kukris as they prepare for their pass out parade on completion of their military training at Helles Barracks at the Infantry Training Centre on November 16, 2017 in Catterick, England. (Ian Forsyth/Getty Images)
Getty Images

“I have never seen more steadiness or bravery exhibited in my life. Run they would not and of death they seemed to have no fear, though their comrades were falling thick around them, for we were so near that every shot told,” British soldier John Shipp wrote of the Gurkhas in 1816, according to military historian Craig Lawrence.

After seeing them in action, that year the British decided it might be a better idea to recruit the Gurkhas for an irregular fighting force of their own. Some Gurkhas agreed and went to India, then a British colony, to serve with the Indian military.

As many as a quarter million Gurkhas fought for the British empire between the first and second world wars, on battlefields from Egypt to France to the Far East, and tens of thousands were killed in action.

In the 1947 partition of India, Gurkha units there were split between the Indian Army and the British Army. They have continued to serve in each ever since in conflicts all over the globe, from Bosnia to Afghanistan and Iraq.

A 2010 BBC profile of the British Gurkha fighters said that for the British Army, “The soldiers are still selected from young men living in the hills of Nepal — with about 28,000 youths tackling the selection procedure for just over 200 places each year.”

Former British soldier Johnny Fenn, who served with Britain’s Brigade of Gurkhas from 1998 to 2012, said the Gurkhas’ “incredibly austere” lifestyle grants them a “hardiness” that predisposes them to be excellent fighters.

“Gurkhas have grown up in an extremely difficult environment in the hills of Nepal and, as a result, their bodies are simply on a different plane to our own,” Fenn wrote in The Telegraph in 2016.

In 2007, England’s Prince Harry was stationed in Afghanistan with a Gurkha unit. “Physically, I bow down to these guys,” he later said. “They are incredible.”

One of the Gurkhas with whom Harry served, Sgt. Dipprasad Pun, was awarded the Conspicuous Gallantry Cross for fighting off up to 30 Taliban fighters by himself when they attempted to storm the post at which Pun was stationed in 2010 — one of several astounding stories of Gurkha battlefield exploits over the years.

The Gurkhas’ experience in Singapore also dates back to the Indian partition, when some of the British Gurkha forces were sent to Singapore, then controlled by the British, to replace departing Indian forces. The Gurkha Contingent of the Singapore Police Force was established in 1949 and took on “specialist security tasks” that later included VIP protection, the police website says. Singapore gained its independence in the 1960s, but retained the Gurkha police unit.

“The majority of the unit’s police officers are Gurkhas recruited from a small number of hill tribes in Nepal,” the police website says. “These Gurkhas possess the qualities best suited to service in the Contingent, specifically: physical and mental robustness, resourcefulness and an uncomplaining dependability.”

It’s those qualities that could earn the Gurkhas a supporting role in a potentially historic moment next week if Trump and Kim finally sit across the table from one another.

“They remain very much a substantial and front-line force, and the demands of this kind of event are precisely the sort of special operation that the Gurkhas are trained to handle,” Huxley, the Singapore security expert, said.