The Legacy of George H.W. Bush’s Decision to Send U.S. Forces Into Somalia

A few minutes after noon on this day 26 years ago then-President George H.W. Bush appeared on television screens across the nation.

“I want to talk to you today about the tragedy in Somalia and about a mission that can ease suffering and save lives,” the outgoing presidentsaid. “Every American has seen the shocking images from Somalia. The scope of suffering there is hard to imagine.”

By Dec. 4, 1992 Somalia had been suffering from an intense famine for months, threatening the lives of 1.5 million people. Making the dire situation worse, fighting factions under different warlords in the capital city of Mogadishu were routinely hijacking or blocking humanitarian aid sent by the United Nations.

“In many cases, food from relief flights is being looted upon landing; food convoys have been hijacked; aid workers assaulted; ships with food have been subject to artillery attacks that prevented them from docking,” Bush said. “There is no government in Somalia. Law and order have broken down. Anarchy prevails.”

Now, in the final days of his presidency, it was time for the U.S. military to step in, Bush asserted.

“As I speak, a Marine amphibious ready group, which we maintain at sea, is offshore Mogadishu. These troops will be joined by elements of the 1stMarine Expeditionary Force, based out of Camp Pendleton, California, and by the Army’s 10th Mountain Division out of Fort Drum,” he said. “These and other American forces will assist in Operation Restore Hope. They are America’s finest…

“The people of Somalia, especially the children of Somalia, need our help. We’re able to ease their suffering. We must help them live. We must give them hope. America must act.”

The mission had two parts, according to Bush: first to create a “secure environment in the hardest hit parts of Somalia,” and then to withdraw troops after “handing the security mission back to a regular U.N. peacekeeping force.”

Bush insisted that the mission had a limited objective: “To open supply routes, to get the food moving, and to prepare the way for a U.N. peacekeeping force to keep it moving.” The United States was not prepared to get into an open-ended military commitment.

But in a lesson U.S. presidents have learned over and over, and as anyone familiar with the events of Black Hawk Down, it’s never that simple. This one lasted deep into the first term of Bush’s successor, Bill Clinton, who was sworn in as president in January 1993. 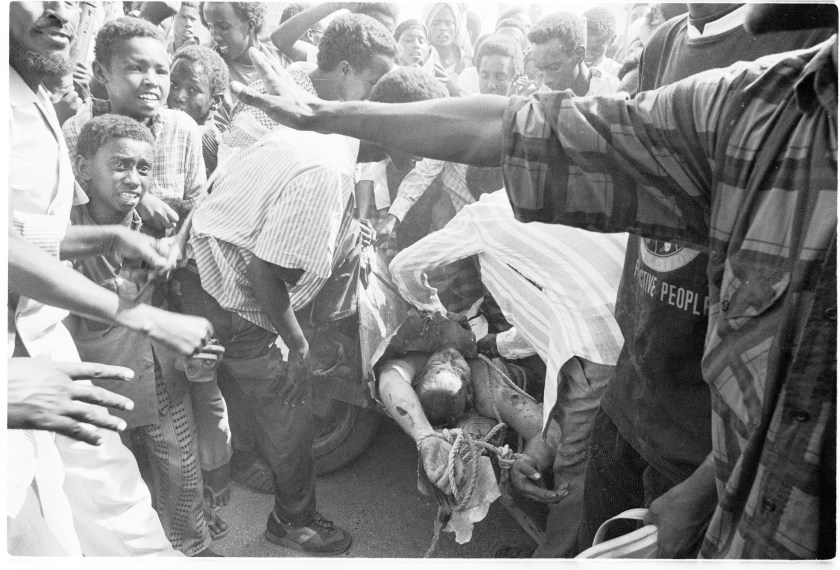 A U.S. airman from a downed Black Hawk is seized and killed in Mogadishu’s main square, October 1993. Shortly after this picture was taken, the airman’s body was dragged through the market area. (Photo by Keith Bernstein/Getty Images)

“The United States Army has a long tradition of humanitarian relief. No such operation has proven as costly or shocking, however, as that undertaken in Somalia from August 1992 to March 1994,” reads a U.S. Army analysis of the mission. “Greeted initially by Somalis happy to be saved from starvation, U.S. troops were slowly drawn into interclan power struggles and ill-defined ‘nation-building’ missions.”

Operation Restore Hope officially began on Dec. 8 and at first went fairly smoothly by all accounts.

“Luckily, the diplomatic groundwork had been laid for U.S. troops to arrive with no Somali resistance. Thereafter, Somali warlords quickly agreed to cooperate with each other (at least for a time) and work with the U.S. troops to establish a relatively benign and secure environment,” the U.S. Army determined.

The troops were able to open the supply lines, providing much-needed relief to countless locals. “Despite some setbacks and incidents, Operation Restore Hope succeeded in its goal of bringing an end to mass starvation,” the analysis concluded.

It was a few months after Clinton’s inauguration, when the U.S. turned the mission back over to the U.N. as planned that things “started to unravel.” The U.N. decided to embark on a more expansive mission that included “nation-building” projects aimed at nothing less than the restoration of an entire country, as Madeleine K. Albright, the U.S. ambassador to the United Nations put it. The projects infuriated the current power brokers on the ground.

Eventually fighters belonging to one of the more prominent warlords, Muhammed Farah Aideed, attacked and killed a number of U.N. peacekeepers. That, in turn, led to retaliatory strikes by U.S. forces working with the U.N.

By June a U.S. commander issued a warrant for Aideed’s arrest, which “only served to harden the political lines in Mogadishu,” the Army history says.

As stability descended back into chaos, the U.S. decided to go in and grab Aideed, which led to the botched mission known today as Black Hawk Down in which 18 American soldiers were killed.

“The sense of ‘mission accomplished’ made the events of 3-4 October 1993 more startling, as Americans reacted to the spectacle of dead U.S. soldiers being dragged through the streets by cheering Somali mobs – the very people Americans thought they had rescued from starvation,” the Army report found.

Days later, President Clinton gave orders to begin withdrawing U.S. forces from Somalia, leaving behind token military assets and a lingering sense of defeat and futility. Clinton later referred to the Black Hawk Down incident as one of the darkest hours in his presidency.

President Bush’s recent passing has revived a debate among Somalis about the mission he ordered so many years ago, “with some remembering their countrymen killed in the fight against warlords and others arguing that thousands of starving people were saved,” The Associated Press reported.