It’s Official: The “No White Pants After Labor Day” Rule Is Bullshit

We polled the experts, and the results were unanimous 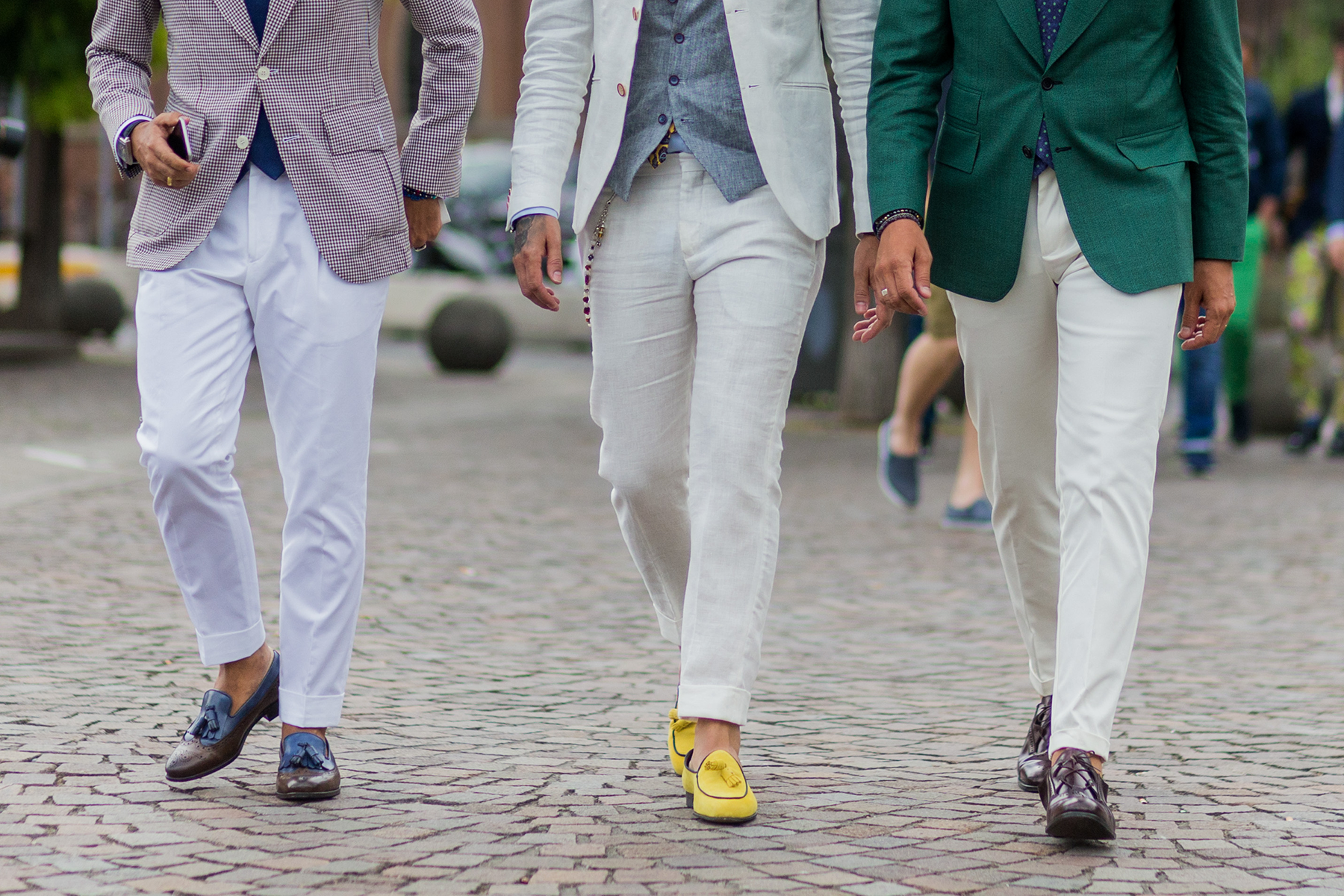 In Florence, the white pant never goes out of style
Christian Vierig / Getty
By Danny Agnew / September 2, 2019 6:29 am

Labor Day is upon us, friends — the semi-official end-of-summer holiday, and, if tradition is your thing, the death knell for those natty white pants you’re (hopefully) sporting as you read this.

Tradition, however, is very much not your correspondent’s thing. I’ve always found the “no white pants after Labor Day” rule to be fusty and lame, and that was before I found out that it originated to help old-timey aristocrat types distinguish themselves from the nouveau riche. Balls to that, I say.

I was, however, curious to know if I was alone in this thinking, so I reached out to a cabal of stylish cats from the world of fashion to ask their thoughts on the issue. Turns out that I’ve got more than a few snowy-trouser-supporting compatriots — to a man (and woman), they agreed with me, albeit for various reasons and with a smattering of caveats.

From designers to stylists to Instagram menswear mavens, read on to get their take and arm yourself against any criticism from the dowdy and unadventurous as you stride confidently past them into fall, blinding their dull and lifeless eyes with your pearly pantaloons.

“I have no idea where this rule comes from and I am not going to Google it because I really don’t care. This, like most sartorial ‘rules,’ is bullshit. Sure I pack away the linen, but the white jeans and heavy cotton canvas trousers (granted my preferred ones are technically ‘bone’) stay on me all year. I love the way a ‘winter white’ look pairs with a charcoal cashmere sweater or Harris tweed. I love white corduroy as well and long for the first crisp day to roll them out. This Labor Day rule, like the restaurant/bar dress code rule, is outdated and should be re-examined. Good style is good style and the ‘rules’ should be broken with discretion. I will never wear a pair of pajamas out to dinner, but I think Julian Schnabel looks pretty f’ing good in them and I admire the balls it takes to get away with that. At the end of the day it really is just about confidence.”

“I usually find all those rules pretty silly — a white pant is fine whenever. Having said that, from a styling perspective, I get in the mood for Autumnal colors pretty much the first day of September!”

“The old rule of no white after Labor Day is antiquated and needs to be changed. If you are stuck in the old days, you can play with off-white bottoms — they have no start or end date.  Whatever you choose, please make sure you update the shoes … a boot can really offset a light jean.”

“If you’re a clothing traditionalist like me — and personally I dress really boring — don’t wear white after Labor Day unless you’re playing squash or tennis. But if you’re a risk taker and rule breaker, do you. The IDGAF attitude of winter white is cool if you’ve got what it takes to do whatever you want.”

Wearing white pants has more to do with climate than with actual timing as one tends to wear them when it’s appropriately warm. In Miami, say, you can pretty much wear white pants year-round given the temperature there, but in New York City and elsewhere in the north I would be more apt to follow the suggested Labor Day timeline.

However, I do differentiate between white pants and white jeans, which can absolutely be worn year-round, wherever you may be. A camel coat, grey cashmere sweater and white jeans worn with a Chelsea boot is a very chic autumn look!”

“As if. I mean, I’m from LA so, A) what’s Labor Day, and, B) I prefer white in the winter when bolder, brighter, more vivid colors are a sight for seasonally-affected eyes. Also, depending on who you ask, the rule about white after Labor Day was either created by society elitists wanting to create a stumbling block for ambitious newcomers, or by people trying to wash winter grit out of their lighter clothes. Classism today is far more insidious, and, hey, we have Clorox — so, do you.”

“Why not? Early to mid-September is some of the best, driest weather of the season in NY … and it’s still actually summer on the calendar. I have a pair of white RTH painter pants that rule on September nights.”

“Totally against [this rule]. Fashion has no rules. If you want to wear white every day for the rest of the year after Labor Day then do it! Plus, some of the biggest designers absolutely kill it with their winter whites — just saying.”

“I’m not sure who came up with these antiquated rules, but all rules are made to be broken. Since white pants can easily get ruined, they tend to be more occasion-specific, but a time of year should not dictate when they can or cannot be worn. Many people vacation in warmer climates during the winter months, so white cotton pants work very well in that scenario. Winter whites can also look very chic for holiday parties. I think one should wear white pants whenever the mood strikes!”

“I rarely worry about other people’s arbitrary style rules. Personally I’ll be on a beach in white after Labor Day. Hopefully several times before the next one comes around…”

“My feeling on white after Labor Day, or any day of the year, is do whatever feels right. I’ve never believed in fashion rules. Put on something that makes you feel good, and be you!”

“I’m into wearing white after Labor Day. It all depends on how you blend the white elements with the rest of the look. But I also like wearing corduroy in summer. I really like wearing white fleece pieces in the fall. It freshens up the look — and it is a neutral, after all.”