This denim jacket is the standout piece from the collection.
Courtesy Washington Wizards
By William Goodman @goodmanw

If someone glances at the current iteration of the Washington Wizards logo, they’ll be hard-pressed to know it has anything to do with a wizard. Now on its third version in 25 years, the current emblem is meant to look like a magic wand conjuring a spell, with the Washington Monument serving as the stick. When I spoke with local artist Chris Pyrate about the logo, it wasn’t something that jumped out right away to him. As someone who remembers the vintage wizard, the new versions don’t resonate as much.

Pyrate aims to hopefully resolve some of that lingering confusion over the Wizards with his new collaboration with D.C.’s NBA franchise. Tied to the ongoing 25-year anniversary celebration of the team, which includes throwback jerseys and merch, Pyrate developed a streetwear-influenced capsule collection that merges his style with the Wizards’ various aesthetics. The line launched on Thursday, November 10, during the Wizards game against the Mavericks.

For Pyrate, approaching this collection meant going back to the roots of the brand. When putting together his mood board, he started with the original sets of colors introduced by the Wizards a quarter century ago — orange, navy, white and black — to avoid looking like the current logos of the Wizards…and a few other sports teams around town.

“What I suggested was [those colors],” he says. “Everything [else is] patriotic. You want to stand on your own, brand-wise.” Between the Nationals, the Capitols and even some aspects of the Commanders, there’s plenty of red, white and blue to go around in D.C., which means if you’re looking to make a splash, going back to where it all started is a good idea. However, Pyrate’s collaboration will also include some elements of his cherry blossom designs, as leaving off his signature motif would make it feel incomplete.

The partnership started after Saxx Booker, who used to work for the Wizards, was getting tagged in a mural Pyrate did, which incorporated elements from the old Wizards logo, asking her to bring the artist into work on something cherry blossom related. As Nike worked to develop their own cherry blossom jerseys for this year’s City Edition uniforms (Nike and the NBA have an ongoing relationship for uniform development), the Wizards saw a chance to bring Pyrate into the fold. Talks between the two started back in the winter of 2019 when the idea was presented to have Pyrate do a dedicated apparel line around the release. Pyrate insisted the collection be rooted in streetwear.

“I feel like one of the most understandable forms of communication of culture and culture direction is streetwear,” he says. “It’s for everybody. It’s for people walking around on the street! You get more accustomed to valuing comfortable clothing. It’s a down-to-earth language.” 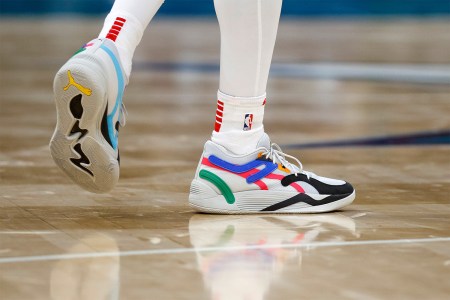 The streetwear appeal is definitely present. Notable standouts include a wizard pondering his orb (a basketball) clad in blossoms, a black trucker jacket reminiscent of a jersey, and a pink trucker hat with a cherry blossom on it. A lot of the collection seemed to really click into place when Pyrate started looking at the Wizard himself. In the first draft, he noticed the skin tone of the wizard was meant to be golden. But when he dropped the skin tone, it produced a Wizard that was more brown in color than gold. “I think it’s gonna really resonate,” he says.

The Wizards aren’t the first team that probably jumps to mind when you think of sports in the D.C. area. Hell, they aren’t even the most successful basketball franchise in the city. But they do have a history to them, one that’s well worth exploring and celebrating when put in the right hands. That’s certainly the aim of Pyrate, who appreciates the city’s basketball roots. While he’s not playing here, Pyrate notes that Kevin Durant once hooped here, that Michael Jordan spent time with the Wizards and that Patrick Ewing is the coach for Georgetown. There’s a basketball DNA that runs through this city — and maybe it takes someone like Pyrate to help the Wizards tell that story in a new light.

“I want to see more Wizards stuff on the street,” he said. “Not just at the game. I want to see people in D.C. wearing it like a Nationals hat.”

The collection is exclusively available at the Team Store at Capital One Arena. Additional items will also be sold in the store and online.