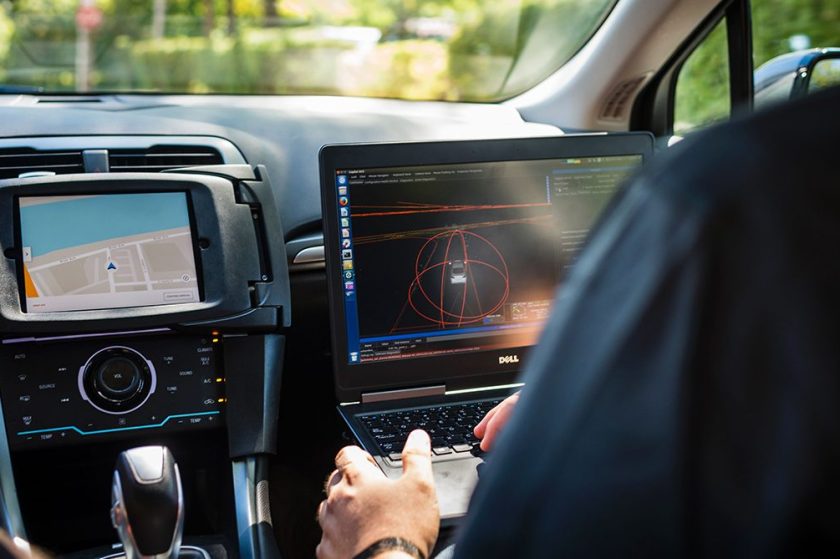 A technician sits in an Uber self-driving car on September 13, 2016, in Pittsburgh, Pennsylvania. (Angelo Merendino/AFP/Getty Images)

In the future, you won’t drive your car. You won’t be driven by a sexy robot either. (Unfortunately.) No, your car will drive itself. Which means you’ll be free to do other things. And those “other things” will include arcade-style games and social media and restaurant reviews.

At least, that’s what’s going to happen if the bright minds at the ArtCenter College of Design in Pasadena, California, have anything to say about it. And they probably will, since many alums from the school have gone on to design cars for BMW, Lexus, and the like.

During a recent 14-week course, these design students were told to ignore the technical challenges of autonomous driving and simply focus on what the experience of riding in self-driving cars would (or could) be like. And they got to work with lots of other smart people, from the worlds of rocket science and the arts. What they came up with is, in a word, fascinating.

Some students envisioned riders being able to choose their “journey” from a menu of car styles. Others imagined an interface that would display Yelp reviews of places they were approaching, and games that they could play to pass the time. Still others created experiences in which riders could move around inside the car to enhance their car’s turns and accelerations.

And then there were the students who foresaw ride-sharing situations in which the car’s “driver” would know the kind of coffee you like.

Whether you are in favor of or opposed to the self-driving car revolution that we keep being told is headed our way in the very near future (read: the next few years), one thing is certain: It’s going to make being in a car very, very different.

Watch the video below to get a sense of the many experiential possibilities of self-driving cars.

Forget the Hall of Fame. Barry Bonds Has an Idyllic Second Life as a Cyclist Now.
Shake Shack’s Executive Chef Shares the Secret to a Great Buffalo Sauce
Where “The Book of Boba Fett” Went Wrong
Casper's Premium Mattresses Are Up to 40% Off
Save 28% on a New Pair of Apple AirPods Pro
A Cooperstown With David Ortiz but No Barry Bonds or Roger Clemens Is a Farce
16 Albums to Make You Feel Warmer in the Dead of Winter
The 15 Sexiest Valentine’s Day Gifts
No, Old Music Isn’t “Killing” New Music