The Disastrous Tale of the First Underwater Nuclear Test in U.S. History 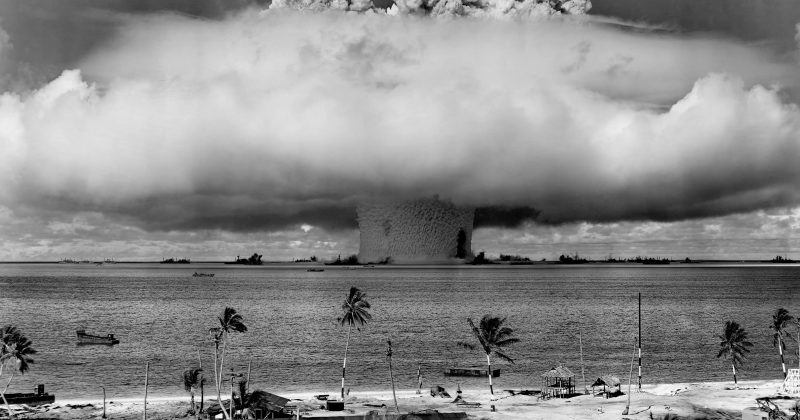 The arms race that came to define the Cold War era produced a staggering amount of scientific advances, but not without a few big blunders along the way. The first underwater nuclear test—inspired by a mix of saber-rattling and the Navy’s attempt to prove its value in an era when the Air Force had such destructive power—was one of them.

The United States Navy conducted its first nuclear test in 1946, dubbing it “The Baker Test.” In order to test how a Naval fleet would fare against a nuclear weapon, the department detonated a 21-ton bomb (strangely dubbed “Helen of Bikini”) 90 feet beneath a cluster of empty Navy ships sitting in the Bikini Atoll, a part of the Marshall Islands in the central Pacific (it’s located between Hawaii and the Philippines). The Navy’s plan was simply to decontaminate the ships and sail home after the bomb went off, but they soon realized the test was different from ones in the past. In fact, it went so poorly that it would take another decade for them to try again—and by that point, it was too late: nuclear tests would be banned altogether in 1962.

The ‘Baker’ explosion, part of Operation Crossroads, a nuclear weapon test by the United States military at Bikini Atoll, Micronesia, on July 25, 1946. The wider, exterior cloud is actually just a condensation cloud caused by the Wilson chamber effect, and was very brief. There was no classic mushroom cloud rising to the stratosphere, but inside the condensation cloud the top of the water geyser formed a mushroom-like head called the cauliflower, which fell back into the lagoon. The water released by the explosion was highly radioactive and contaminated many of the ships that were set up near it. Some were otherwise undamaged and sent to Hunter’s Point in San Francisco, California, for decontamination. Those which could not be decontaminated were sunk a number of miles off the coast of San Francisco. (U.S. Army Photographic Signal Corps)

The radiation measured at dangerously high levels, and cleanup crews were forced to turn back. The Navy had failed to account for the role the water molecules would play in this new type of trial. The bubble of hot gas created by the explosion sent two million tons of water, in a half-mile–wide column, more than 5,000 feet in the air. Radioactive mist rained down across the area’s lagoon, while ship hulls a mile away were drenched with a foamy wall of water.

During previous tests held above ground, the radiation dissipated as the blast cloud sprayed the particles into the atmosphere. Yet, the water acted like a sieve in the underwater test, allowing the hot gas to expand while trapping the radiation particles in the mist falling back down to the lagoon—right onto the Navy’s fleet. Radioactivity levels on the boat were 20 times the lethal level. 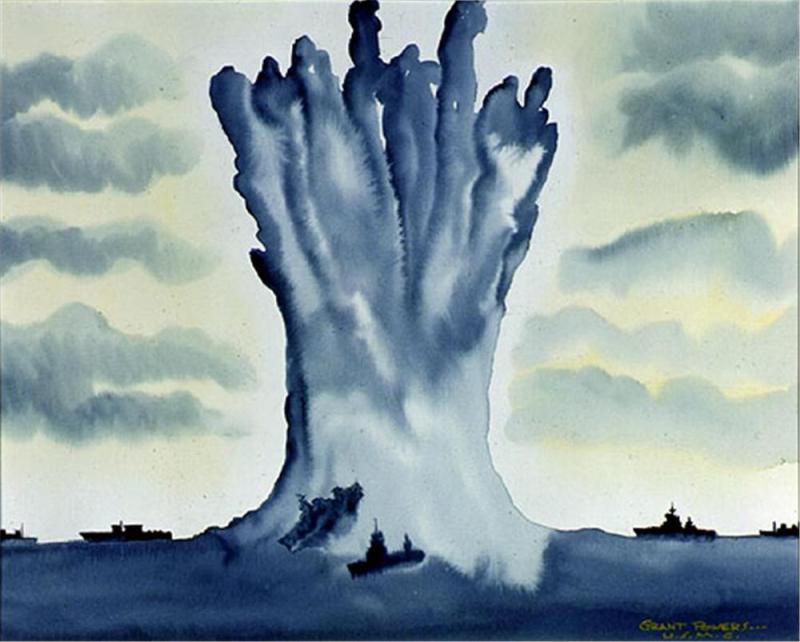 The damage was quite extensive. One amphibious landing vessel was immediately pulverized by the blast, and over the next four days, The Arkansas (a battleship), The Saratoga (an aircraft carrier), Nagato (a Japanese battleship captured in WWII), and three submarines all sank, either from the damage sustained or water taken on during the blast.

Writing for Atlas Obscura, Sarah Laskow detailed the extensive shortcomings of this underwater nuclear test. Here’s Laskow on what happened next:

“Still, the Navy thought the ships could be saved. The captains of the target vessels wanted their ships back, and Rear Admiral Thorvald Solberg, who was in charge of decontamination, believed the ships could be washed down and sent home. But the cleanup crews were not prepared for how thoroughly contaminated the boats were. They began to hose the ships down with foam and salt water, trying to scrub out the radiation. It was a futile effort:  The only way they could have clean them off would have required sandblasting everything down, removing every bit of wood and washing the brass and copper pieces of the ship with nitric acid.”

Read Laskow’s full story on Atlas Obscura here. But, before you do that, watch some archival footage of the Baker Test below.