The ‘Nothing Burger’ Collusion Theory That Killed Millions

Has there ever been a  time when a losing faction—surprised and shamed by an unexpected loss—refused to accept personal responsibility, and instead turned to congressional hearings, press battles with the president, street demonstrations, partisan-style prosecutions, and accusations of treasonous Russian collusion to explain their loss? And what happened when that explanation proved false?

The place and time were Weimar Germany, following the events of World War I. The theory was the “Dolchstoßlegende,” or the “stab in the back” myth. The results were a disaster for all.

The Armistice to end World War I took effect on November 11, 1918, and unlike the Second World War, the Germans did not unconditionally surrender in the smoking ruins of Berlin. In November 1918, the German troops were still in the field, 450 miles away from Berlin. Russia had withdrawn from the war not long before. Due to press censorship, many citizens in Germany had no notion that their nation was losing. 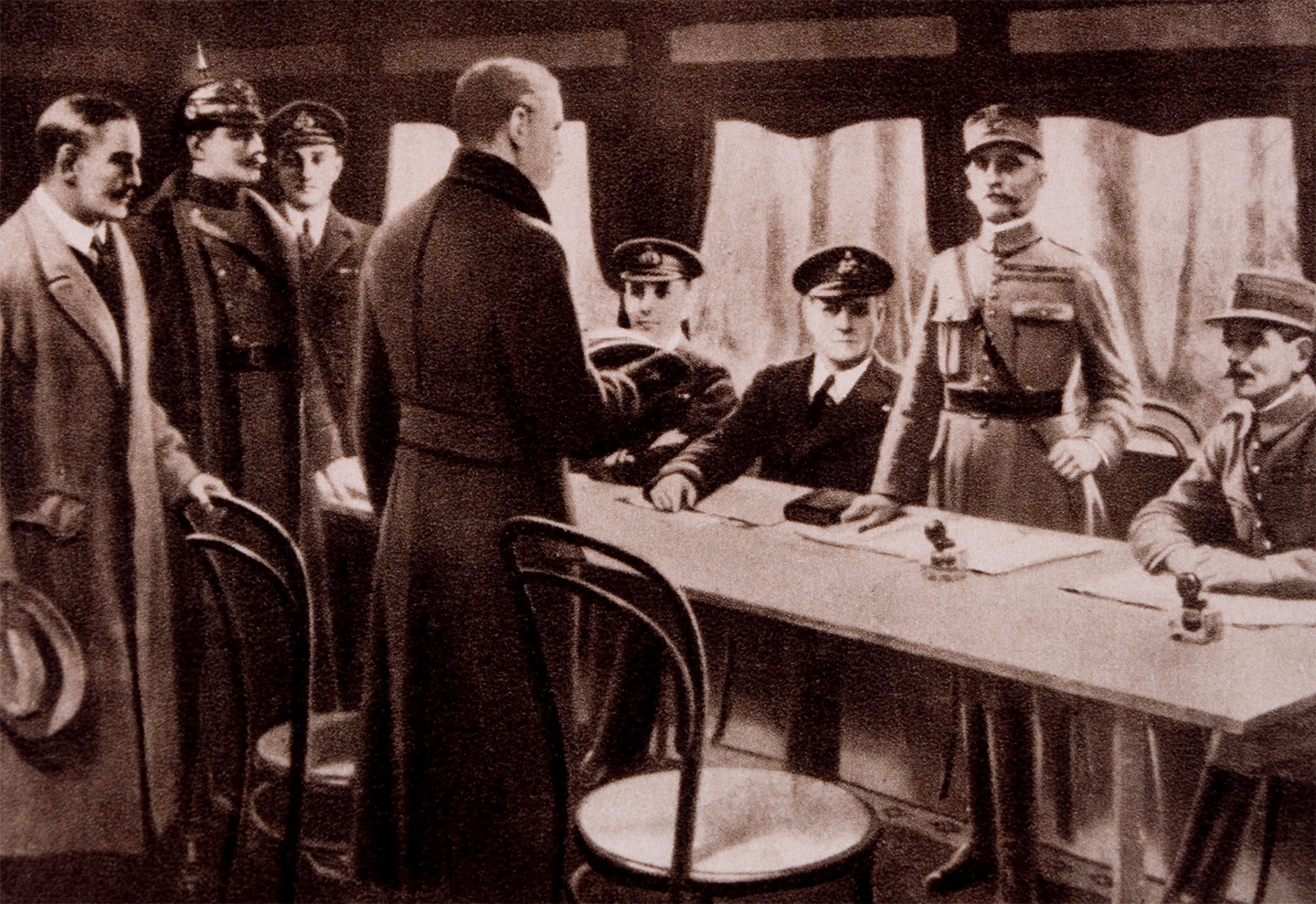 “The purpose of myth is to provide a logical mode capable of overcoming a contradiction,” one reviewer of the period has written, citing Claude Levi-Strauss. As the reality of German defeat took hold, there was a search for explanations and scapegoats to explain it.

The historical consensus today is that Germany did lose militarily; that the military situation had become untenable. Most importantly, America had entered the war against Germany in April 1917 and was pouring in fresh troops and supplies at an accelerating rate. By the time the war ended, more than four million “Doughboys” had served in the US Army, about half overseas, and the Americans were fighting more bravely and harder than the German high command had expected. Germany had launched a major assault in early 1918 to win the war before the Americans fully arrived, but that attack had failed. Desertions of German soldiers had become rampant. Austria, Turkey and other German allies had sued for peace before the November armistice. The Armistice reflected the reality on the field.

The German military leaders refused to accept responsibility for the loss, however. Soon, they set the “Dolchstoßlegende” into full flame at public hearings at the Reichstag.

Germany at this early postwar stage was a democracy with many similarities to our own. The Kaiser and his military government had surrendered power to the civilian government in 1918, which negotiated the peace. As 1919 started, a democratically elected National Assembly (the “Reichstag”) led by a president (the Social Democrat Friedrich Ebert) governed Germany. The country had a diverse and energetic free press and a well-established judicial system.

The anti-German Allies had begun to call on Germany to turn over imperial military leaders for war crimes trials. Partly to avoid this, the National Assembly decided to hold hearings of its own. An Investigative Committee was established to review Germany’s actions during the war, including the end of the war and the Armistice. 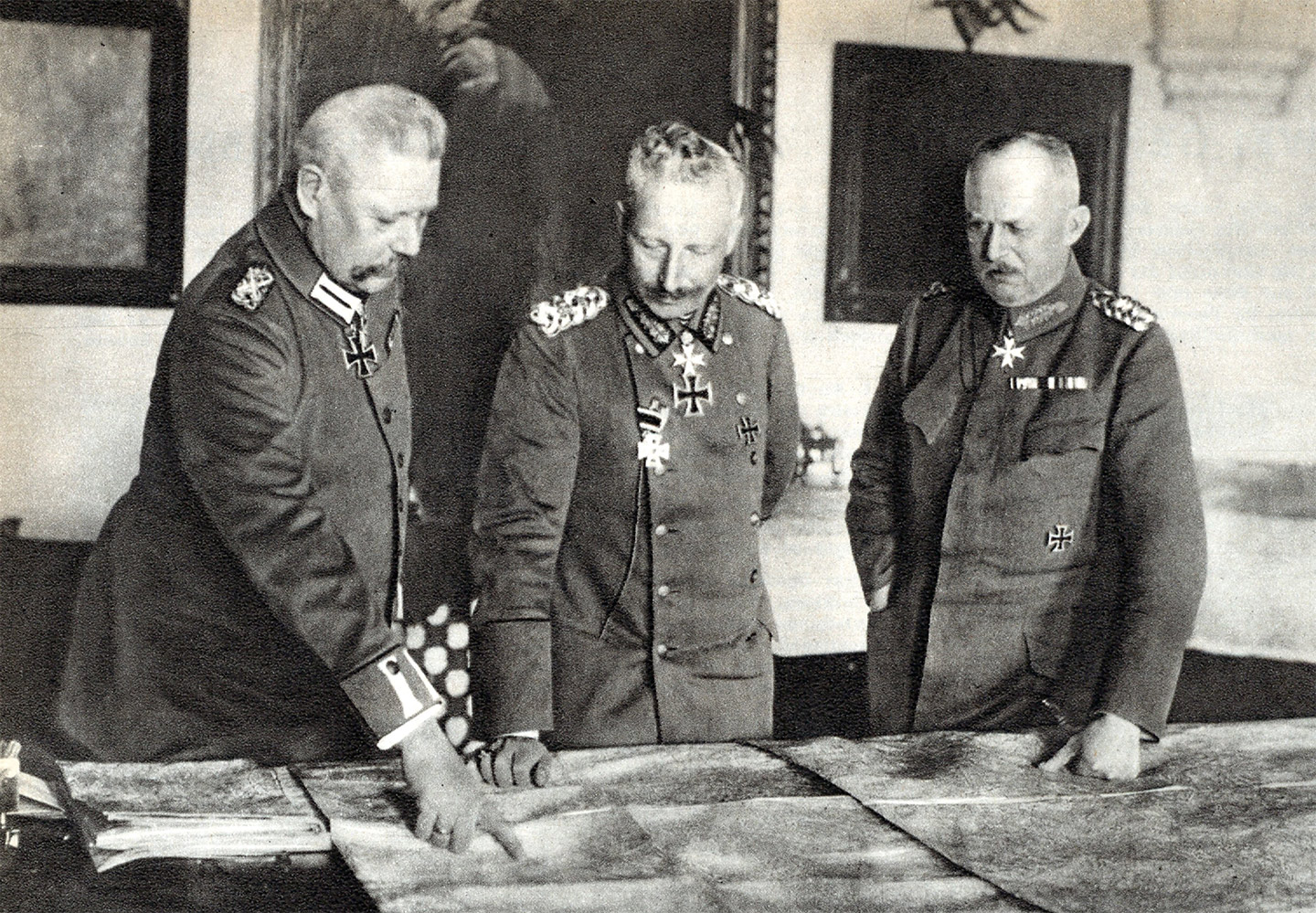 “There is plenty of combustible material in Berlin ….” wrote one newspaper reporter at the time. “There is the Militarist Monarchist Party, which never for a moment acquiesced in the present situation.  There is the Independent Socialist Party, which regards militarists and Monarchists as the cause of all Germany’s misfortunes. There is the Communist Party, threatening death to every other party in the country.  If one were to credit the utterances of the extremists one might assume that all these parties and one or two others unenumerated are thirsting for each other’s blood.”

The Assembly hearings turned argumentative from the beginning. A first major witness, Karl Helfferich, a former German vice chancellor, was called to testify. He blamed Germany’s ills on America and its original “paper neutrality; President Wilson was satisfied to make money out of European blood and suffering.” One of the Assemblymen, Reichstag Deputy Cohn, demanded that Helfferich stop this vilification. Helfferich refused, and then claimed that Cohn had treasonously accepted money from Russian Bolshevists to support the German Revolution. Cohn defended himself against this charge as a lie. Helfferich was fined 300 marks for accusing a deputy of treason, which then led the Committee’s chairman, Deputy Wermuth—who opposed the fine—to resign. “The hearing broke up in disorder. It was later decided to resume the inquiry on Monday when Marshall Hindenburg would appear to give evidence.”

Hindenburg appeared for his testimony as scheduled, but refused to answer the six questions provided to him in advance. Instead, he went on the attack, reading a prepared statement which blamed the military’s loss on forces outside of the military: “the intentional undermining of the army and navy …” and on the demoralization and loss of control of troops due to the revolutionary ideologies on the Home Front.

Hindenburg stated, “An English general rightly said ‘The German army was stabbed in the back’… We succeeded brilliantly on many fronts and achieved unsurpassed victories. The accomplishments of our army and people deserve nothing but the highest praise.”

In fact, historians now agree that an English general, Sir Neill Malcolm, had been misquoted. The major general had used the “stab in the back” phrase as a question, not an agreement. ( To wit, General Malcolm asked Ludendorff, “So you say you were stabbed in the back?”)  Still, it made no difference.  The “Dolchstoßlegende” mania had begun.

Following the events with Helfferich and Hindenburg, it was decided that the work of the Investigative Committee was too big, and should be broken up into four separate subcommittees.  These subcommittees would meet 104 times in all, with no more testimony allowed in public. The fourth subcommittee—the one investigating the end of the war—met all the way into 1927 and published its report in 1928.

The press also joined in the myth making. Massive attacks were launched against the sitting president Ebert, which the president fought back against with libel suits. “Between 1922 and his death in 1925, it is estimated that Ebert instituted 150 to 200 proceedings against people who libeled him. Each time charges were filed, an official investigation took place, and evidence was collected. The result of the process was always in his favor; once this happened, Ebert would declare himself satisfied and drop the suit.  It soon became a sport…to provoke libel charges.” 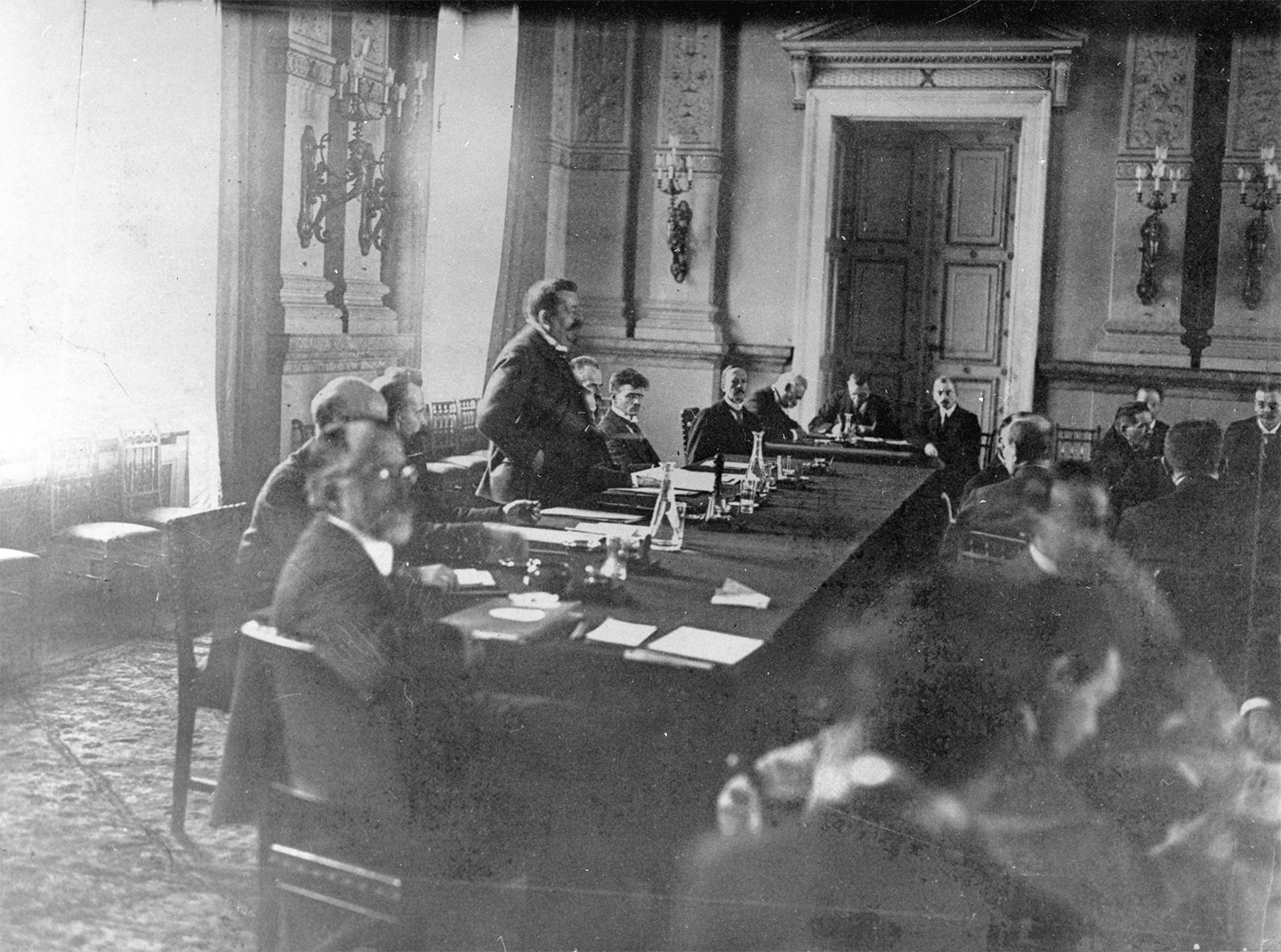 One newspaper refused to settle and demanded a trial. Edwin Rothardt, the editor of a small extremist paper, accused Ebert of treason because Ebert and other Social Democratic leaders had joined a munitions workers’ strike committee in early 1918. It seems clear that Ebert had opposed the strike and had gone on the committee only to bring the strike to a quick and peaceful end. However, the trial was a sensational one. Rothardt’s defense team produced a surprise witness, a workman named Syrib, who testified that Ebert had advised him to disobey an enlistment order. Under cross examination, Syrib’s testimony fell apart as a confessed lie.  However, the court gave the defense time to find another witness against the president: “a cheesemonger from Dortmund” who made a similar claim.

The  American Ambassador Alanson Houghton reported the trial results back to Washington this way: “In effect, the Court expresses the opinion that Ebert and the Majority Socialist Party committed deliberately certain treasonable acts; and the conclusion is furthermore suggested that, if these acts had not been committed, Germany might have won the war.  Thus, the time-worn legend of the “stab in the back” dealt the Germans is revived … It does not speak well for the German judicial profession as a whole, however, if judges cannot abstain from partisanship in deciding cases where political controversies are involved.” 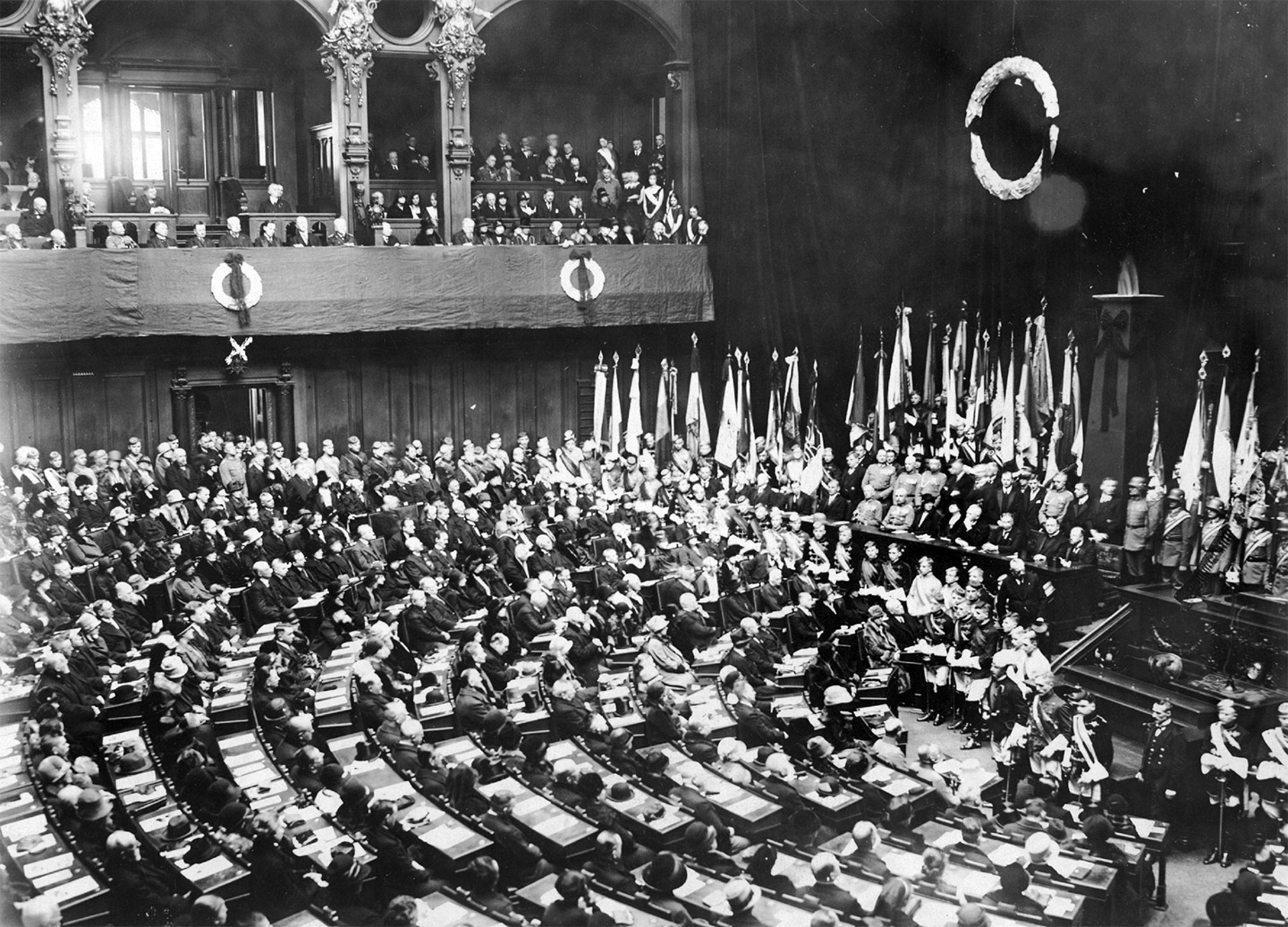 circa 1925: The formal mourning in the Reichstag, Berlin, for President Ebert, with Hindenburg, Croner and Haye. (Hulton Archive/Getty Images)
Getty Images

Ebert continued to fight on, even as his health began to fail. He had a pain in his appendix, but delayed surgery during the trial so as not look weak to the public. He died of peritonitis six weeks later, on February 28, 1925.

Ebert was gone, but the harm of the “Dolchstoßlegende” lived on.  A wide range of villains were proposed as the cause of Germany’s ills: the Russians, organized labor, navy mutineers, profiteers, politicians, and, ultimately, Jews. The militaristic German Nationals were victorious in the Assembly elections of 1924. The National Socialist Party of Hitler fed on the anger as it began to grow into its murderous bloom.

As America enters our own Russiagate hearings and process, trying to explain Hillary’s “inexplicable” loss to Trump, it is worth reviewing the history of other times. The source documents quoted in this essay can be found in the excellent academic collection, The Stab-in-the-Back Myth and the Fall of the Weimar Republic, edited by George S Vascik and Mark R. Sadler for Bloomsbury Publishing.

That toxic mix of unexpected loss; leaders who refused to accept responsibility for the loss; out-of-control legislative hearings; allegations of treason;  attack-dog press behavior; and partisan judges led to one democracy’s disaster.

K.S. Bruce writes the “In This Corner” column of opinion for RealClearLife.