60 Years Later, This Is Still the Only Perfect Game in World Series History 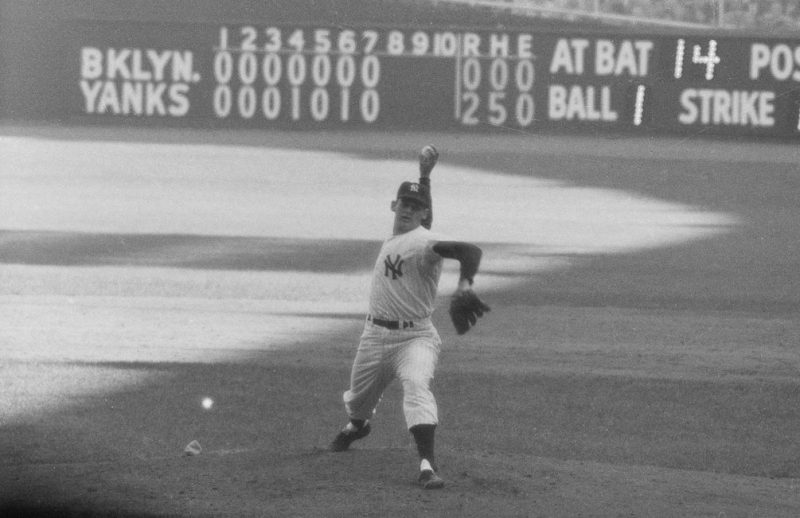 Yankee hurler at Yankee Stadium in the top of the 8th inning as he neared the feat of pitching the first perfect game in World Series history to give the Yankees a 2-0 victory over the Dodgers on October 8, 1956. The 27-year-old threw only 97 pitches as he turned back 27 Dodgers in a row, seven on strikeouts. (Getty Images)

The first World Series was played in 1903. Since then, there have been many great Series moments by New York Yankees, including Babe Ruth’s “Called Shot”, Reggie Jackson homering on three straight pitches, and Lou Gehrig traumatizing St. Louis with a ridiculous .545 average and nine RBIs in a four-game sweep of the Cardinals. The greatest feat of all, however, is by Don Larsen, who 60 years ago threw the only perfect game in World Series history.

It’s more than the only perfect game in 113 years-and-counting of World Series though. No one else has even thrown so much as a no-hitter in the Series. Indeed, it wasn’t until 2010 that baseball’s postseason got a second no-hitter in any round of the playoffs, when Philadelphia’s Roy Halladay blanked the Reds. Don Larsen’s uniquely great feat becomes even more remarkable when it’s remembered he was otherwise a thoroughly unremarkable player. 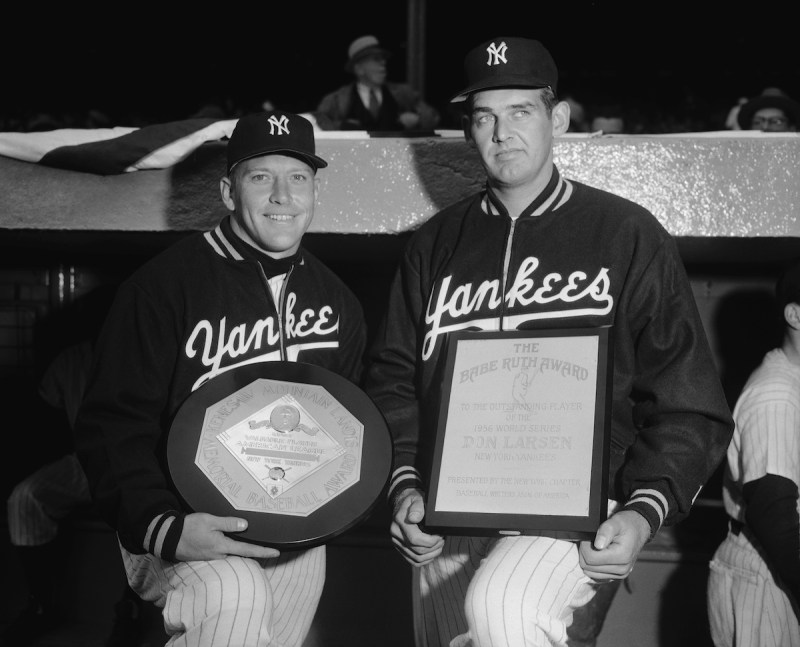 New York Yankees Mickey Mantle, left, star center fielder and pitcher Don Larsen, also of the Yankees, hold their awards they received before the Opening Day game at Yankee Stadium. Mantle holds the Most Valuable Player award he won when he captured the Triple Crown. Larsen displays his Babe Ruth award he received for his outstanding achievement in the World Series for pitching a perfect game against the Dodgers. (Getty)
Bettmann Archive 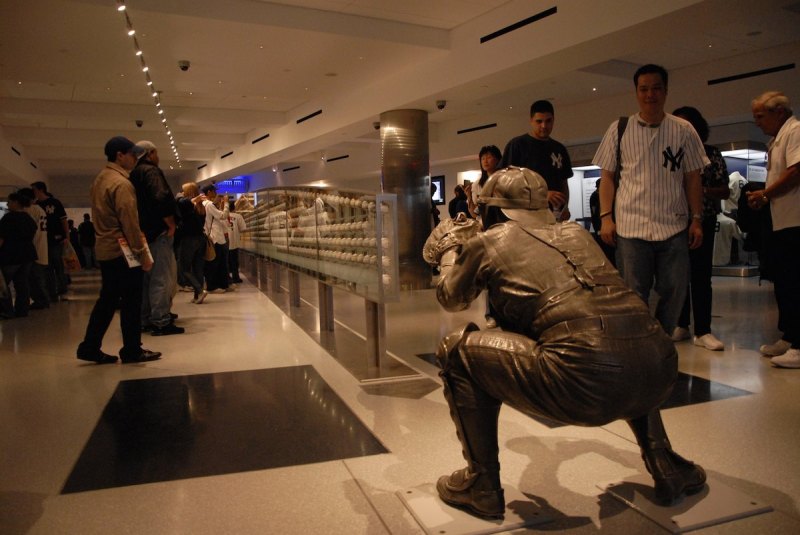 Fans look at the collection of autographed baseballs mounted within the case that stands under the arc of the path of the final pitch to catcher Yogi Berra #8 of pitcher Don Larsen’s perfect game during Game Five of the World Series in 1956 as represented in a sculpture within the Yankees Museum on April 18, 2009. (Diamond Images/Getty Images)
Diamond Images/Getty Images

Larsen lasted a total of 14 years in the majors, playing for seven different teams. His career ERA was 3.78; his career record was 81-91. (He also recorded 23 saves.) His five years with the Yankees was easily the best stretch of his career and even that was solid rather than spectacular: 45-24, 3.50 ERA—after his perfect game, the Yankees reportedly offered him a $1,000 raise before caving and making it $5,000 to bring his pay to $18,000. Larsen never won more than 11 games in a season… but did put up a horrifying 3-21 record for Baltimore in 1954 as he led the majors in losses, just two years before his greatest triumph.

In 2006, then 76-year-old Larsen reflected back on his triumph. He admitted he was going through a phase in his life when he liked to “raise a little hell.” (“I was young and living in the big city. What would you do? Sit in your room and read?”) He said he had remembered the game at least once each day in all the years since—usually because other people mentioned it, but even if they didn’t, “on those days I just think about it myself.” Larsen had no explanation for why he reached the impossible that start, but did perfectly sum up the scale of his singular achievement: “Not many people get to do something that’s only been done once.”