Last Sunday, a few minutes before 11 a.m. Mass, about 20 parishioners wandered into a well-lighted chapel, exchanged pleasantries, and settled into pews. The celebrant was a young Franciscan whose sermon included a tale of Lenten penance gone wrong (as a novice, he forswore warm-water showers, but dreaded the cold ones so much that soon he was skipping those too). Before he began, he tapped the microphone and asked if he was audible: “The sisters said they were having some trouble hearing me.” 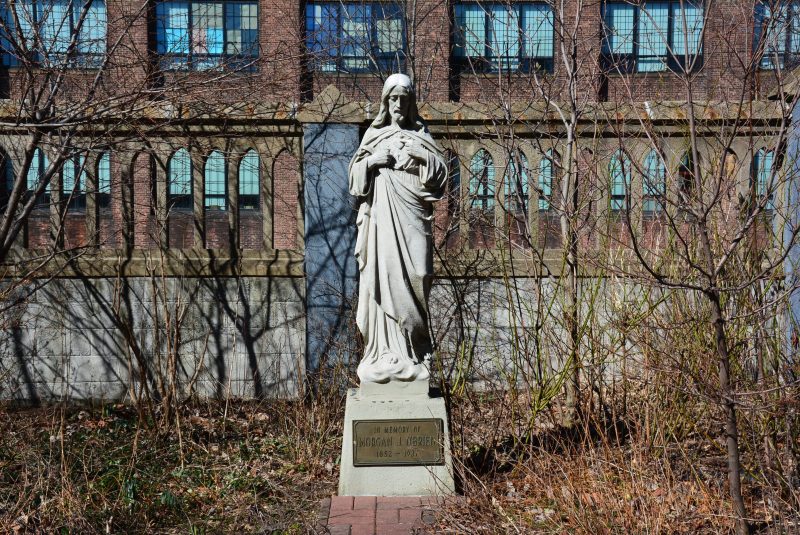 The outside of the Corpus Christi Monastery. (Robert Marston)

In the choir behind the altar, habits and bowed heads were just visible. They belonged to the ten nuns who inhabit Corpus Christi Monastery, the oldest contemplative Dominican monastery in New York State and one of the few active monasteries in New York City. Their sprawling seven-acre spread in the Hunts Point neighborhood of the South Bronx is a pocket of sanctity in a district—New York’s 15th—designated by the U.S. Census Bureau in 2010 as the poorest in the country. A recent visit revealed a way of life alien even to regular churchgoers, especially in a bustling city. 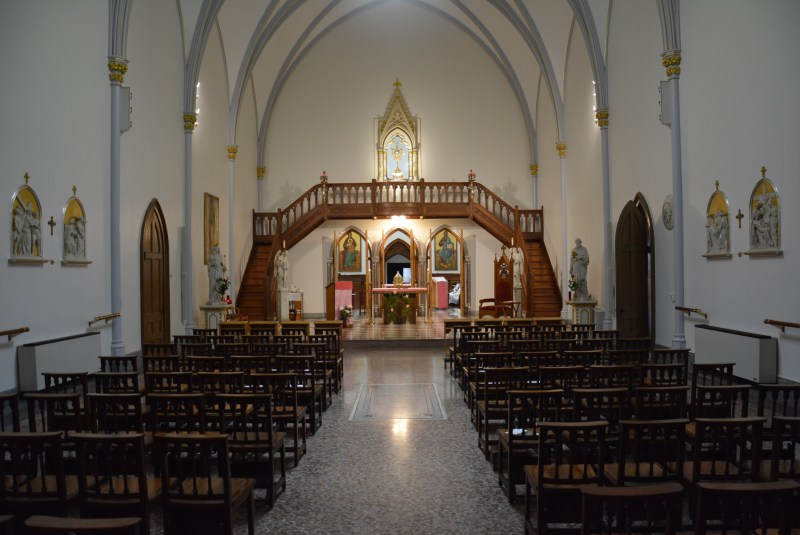 Guests are welcomed warmly. Sister Mary Hansen of the Sacred Heart, a kindly former prioress and current vocation director, is the community’s de facto spokeswoman and frequent emissary to the outside world. Once there, however, access was restricted. Dining with the sisters was a non-starter—contemplative orders, it seems, don’t brook intrusion into their private spaces. So too was speaking with any of the other sisters—four Sundays into Lent, they had other, less earthly things on their minds. 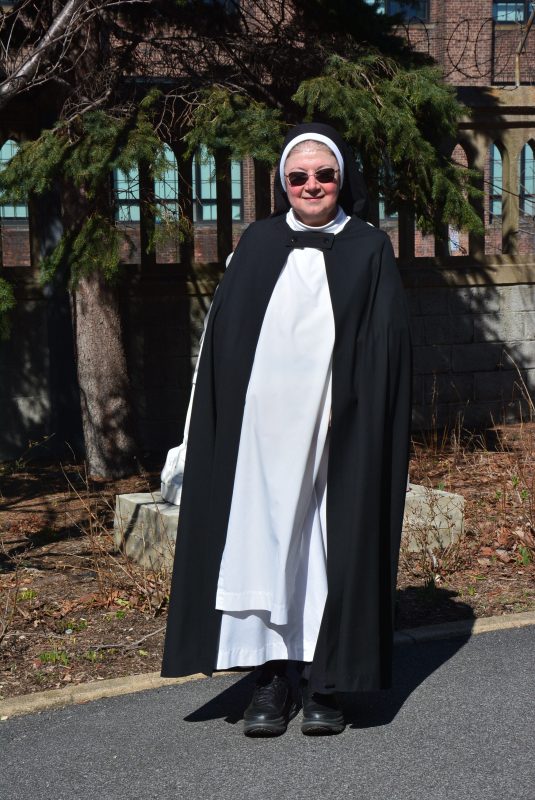 In a conversation in the parlor—the room near the entrance used for receiving guests—Hansen explained the sisters’ daily schedule. Wake-up is at 6, followed by a morning prayer in the choir and Mass at 8. On Sundays, Mass is at 11 and wake-up is an hour later, a luxury denied this day by the beginning of daylight saving time. (Hansen had yet to adjust her watch.)

Midday prayer (11:15) is followed by dinner at noon and recreation at 1. Hansen described a casual and congenial atmosphere. “At recreation,” she said, “sisters laugh, some might play games. You know, do light things. One sister used to roller-skate. We used to have a basketball court, and we would play basketball.” She didn’t cop to any fierce competition, but recalled one sister who was “excellent.” 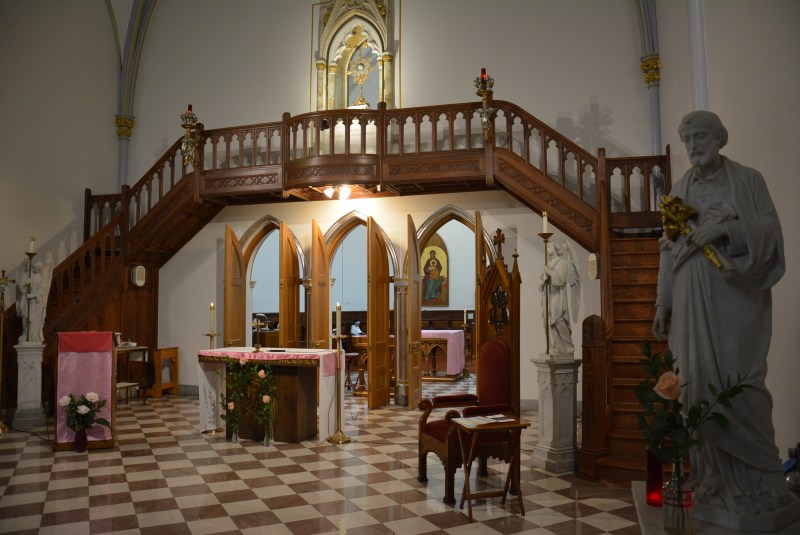 The chapel altar, with the choir visible through the arched doors. (Robert Marston.)

After mid-afternoon prayer (1:45) comes profound silence—where, Hansen said, “We try to keep complete silence. Throughout the day, we’re really not supposed to be talking, outside of recreation.” This goes for meals, where the only noises are spiritual readings or tapes. Exceptions are made on high holidays, sisters’ birthdays, and Sundays, when sisters “speak about personal things, things in their family, things that we have studied, our insights.” These (comparatively) chatty Sunday meals count as the day’s recreation. 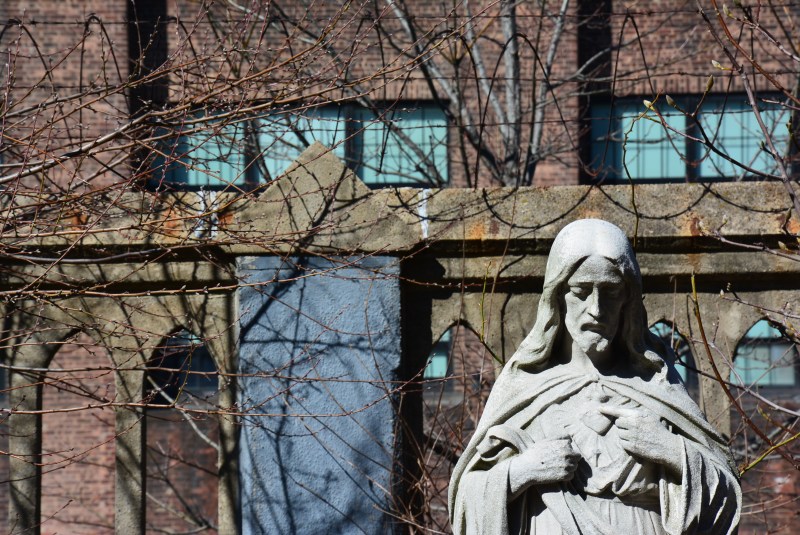 Evening prayer, supper, and night prayer round out a demanding schedule, with an hour of optional recreation sandwiched between the last two. ”A few sisters watch the news” during this optional hour, said Hansen, “so they can pray for what’s going on in the world. Let’s say, we might pray for the leader of North Korea when he was threatening to….” She trailed off, but the prayer she alluded to is surely familiar to even the staunchest atheist.

The notion that most frequently needs disabusing is that the sisters are hermits. While they are contemplative—devoted to prayer rather than active ministry—they are not austere in the extreme like the Carthusians, who emphasize solitude and keep strict silence. “I don’t think I’m called to that,” said Hansen. “I mean, maybe for a short time, if I go on a retreat, for a week or ten days. But after that … I couldn’t do it permanently. I think I need community.”

The Corpus Christi cross that oversees the highway.

Her path wasn’t always clear. A child of privilege, she attended international schools in France and Germany, and spent breaks skiing in the Alps and visiting London and Paris with her mother. During the summers, she stayed with her family at their home on Manhattan’s Park Avenue. “I had everything, as far as material things,” she said. “But something was missing.”

The nuns at her Catholic grammar school had inspired her to become a nun herself. But, for a time, other interests got in the way, like a love of underwater photography that led her to join the excavation team of a famed Bronze Age shipwreck off the coast of Turkey in the early ‘80s. As for her calling, she said, “I didn’t think about it anymore. I was so busy, I guess, with my life. But then the call came back very strongly. At that time I thought God was calling me to an active community—because I wanted to be a missionary, work with the poor, and with children. But God had other plans.” 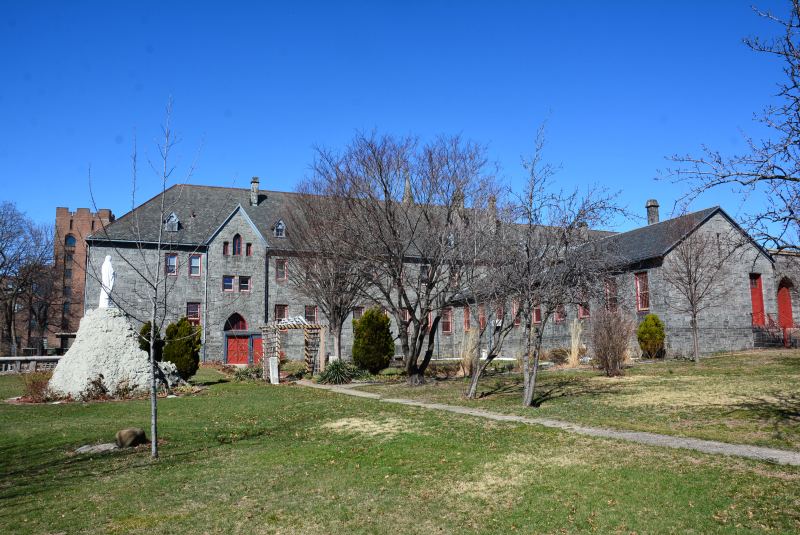 The backyard of the monastery. (Robert Marston)

A vivid dream sealed the deal. Sight unseen, Hansen imagined herself in a monastery’s backyard picking pears with two novices. The next day, she said, she saw the same image on the Corpus Christi pamphlet her parish vocation director handed her. “When I came here,” she said, “as soon as I went into the chapel, I knew that this is where God wanted me to enter. You can’t really explain it, you know? You know it in your heart.”

When Hansen joined the community 20 years ago, right out of college, there were about 25 sisters (the monastery was built for 100). But recent years have brought fewer vocations—the last was a Sister Marie, who entered 15 years ago—and aspirants have come and gone without taking vows. Perhaps unsurprisingly, younger generations of aspiring monastics seem to be opting for a more active lifestyle. Hansen cited the Franciscan Friars of the Renewal and the Sisters of Life as two popular choices for young people—and, indeed, Google searches of the communities yield pictures of hardy friars and dimply nuns. 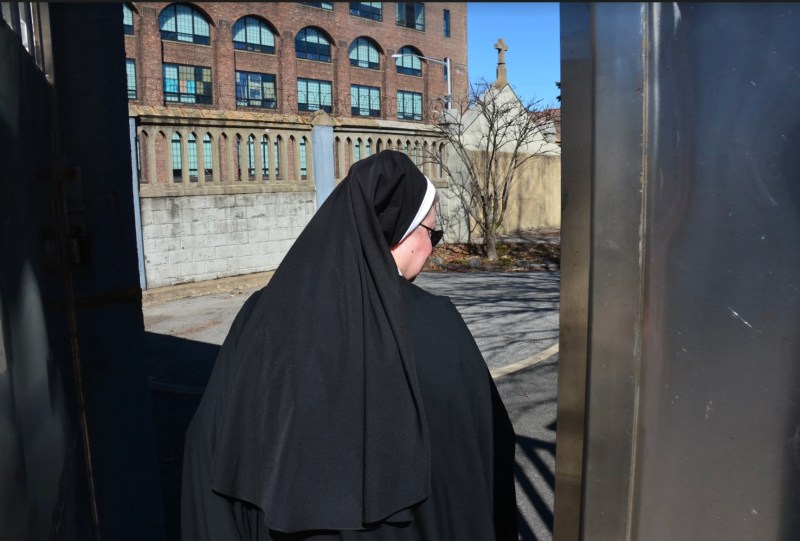 Sister Mary reflects on a life serving God and the Church. (Robert Marston.)

As the sisters of Corpus Christi have aged, their numbers have dwindled. Of the 10 who remain, five are over 70, and doubts about the monastery’s future are common at chapter meetings. Doubts of a higher order are present in the contemplative life as well. “You do go through periods of darkness, or dryness, like you’re in the desert. That’s very common as religious,” said Hansen, invoking Mother Teresa’s prolonged dark night of the soul. She described doubts as “feelings” that don’t threaten to undermine her faith. “I don’t let it become part of me,” she said. “It’s just a feeling. And our feelings constantly change.”

She is sanguine in the face of the community’s uncertain future. “Sometimes we speak about the future and not getting vocations, and sometimes we have doubts,” she said. “But at the same time, God, if he wants this monastery to continue, he can do miracles—he can send people. So, you do have doubts—but what keeps me going is my faith.” She seemed similarly hopeful about the prospect of an article on the monastery. “Do you think we can get vocations?” She smiled. “You never know, right?”

The Next Big Fee in Air Travel? A "Drop-Off Charge" at Airports.

Tom Hanks Built a Perfectly Balanced Car Collection. Now He’s Selling It.
The Next Big Fee in Air Travel? A "Drop-Off Charge" at Airports.
There Will Never Be a Better Year to Visit the Greek Isles
The Latest TikTok Trend Is Making Fun of Greta Van Fleet
How Unlimited Vacation Time Killed the Vacation
The Best "Buy It for Life" Gear We've Ever Owned

The Delicious, Meteoric Rise of the Foodie-Friendly Cocktail Bar
Why Are People Still Buying Stock in Electric Cars That Don't Exist?
Ahmad Rashad Remembers “NBA Inside Stuff” and the Glory of the NBA in the ’90s
WhistlePig's Roadstock Rye Was Aged in a Truck on Route 66
The Best Dating Apps for Divorced Men
Land Rover Is Selling a US-Exclusive Defender That Comes With a Very Special Adventure
Shop Classic Polos Up to 50% Off at Lacoste's Semi-Annual Sale
The 20 Best Style Deals From Nordstrom's Massive Anniversary Sale
Save 15% at Design Within Reach's Living Room Sale

The Best "Buy It for Life" Gear We've Ever Owned
33 Invaluable Travel Hacks From Experienced Jet-Setters
Did Tom Brady Fake His Latest Viral Passing Video?
A Michelin-Starred Chef Shares His Signature Salmon Club Sandwich Recipe
How to Be a Better Hotel Guest, According to People Who Work at Hotels