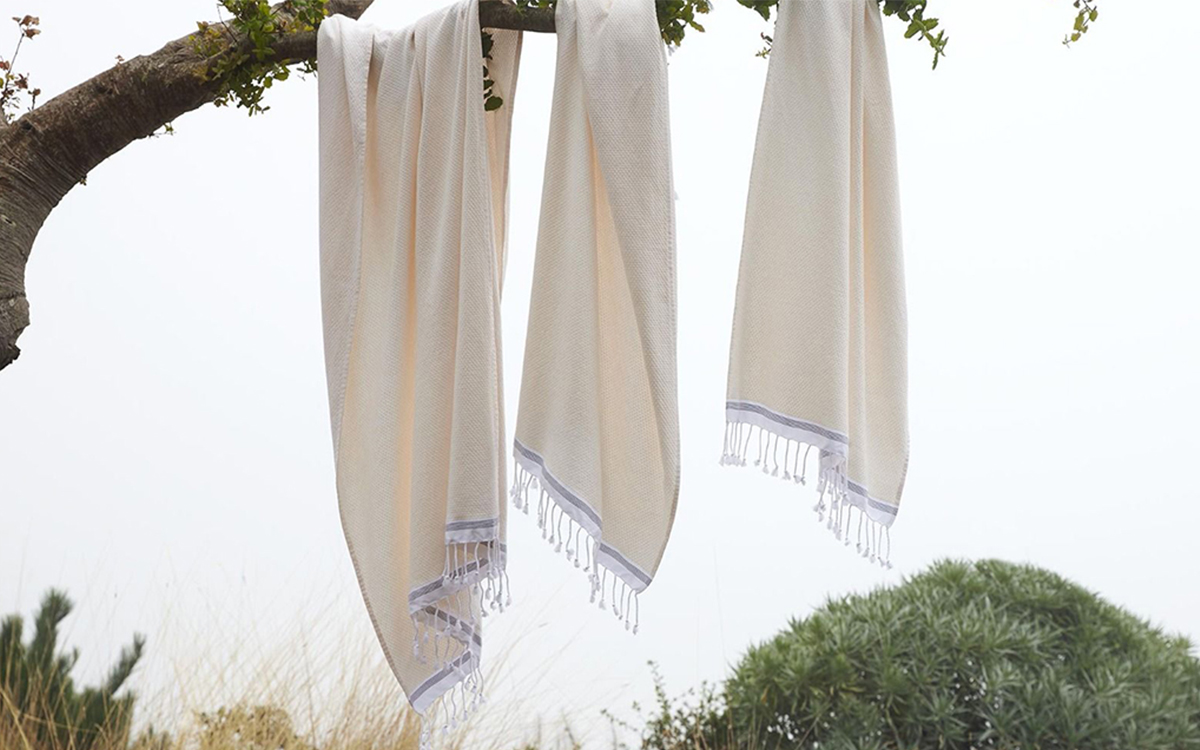 Late last year, in a pinch, I bought a set of bath towels on Amazon.

They were sold under the AmazonBasics umbrella, which specializes in home goods and tech accessories, and I knew I’d wasted $20 the second I got out of the shower to pull one off the hook. The towel had the backbone of a napkin. Instead of taking on water, it shed itself onto me. The set was dark blue, and later that morning, while trying to put my contacts in, I noticed a trail of blue cotton specks everywhere: sticking to the contacts, my fingers, my chest and my thighs.

There are a couple lessons to be learned here. One, don’t outfit your bathroom with AmazonBasics. You’ll die young and damp. And two, start thinking about what the towels in your life are made of. Your childhood home almost certainly featured a bathroom closet stocked with terrycloth towels. Your gym generally keeps a rack of towels spun from an uninspiring, albeit durable cotton/polyester mixture. And those towels you did everything in your power not to steal from the Four Seasons Santa Barbara are made of Pima or Egyptian cotton.

My AmazonBasics towel was terrycloth. In fairness, terrycloth doesn’t always signal disaster. The fabric’s long loops allow it to take on lots of water, and the material’s often used for bath robes, headbands, and even diapers. But the material’s also been in production since the mid-19th century, and it’s unsurprising that modern day brands have taken it upon themselves to perfect an indispensable home good, one that we all use every damn day.

Today, we round up seven superior shower towels that don’t employ tired, traditional terrycloth fabric. Some feature a breathable honeycomb weave, others repackage Turkish styles for the organic cotton age. None will prevent you from getting your contacts in properly. We’ve selected each based on their best attribute (travel, fluffiness, affordability), and our overall winner from Onsen leads the pack. Find Onsen’s Bath Towel, and our six other favorites, below.

This is the best towel in the game right now. Period. It checks every box: lightweight, fast-drying, hangs pasts the knees (not always a given for those over six feet), doesn’t smell, and looks great hanging on a hook. The brainchild of CEO Shane Monson, Onsen raised over $1M in crowdfunding in 2017 and hasn’t looked back since. It all goes back to that oversized waffle weave. The long-staple, honeycomb-patterned cotton is able to A) completely, cozily envelop the shoulders while B) filtering air and remaining fresh. The latter is huge for me, considering I like to shower with an Onsen as much as possible. The $50 price tag will scare off some shoppers, but your dream bathroom shouldn’t stop at the rain shower.

Parachute is an LA-based bedding and bath essentials company that designs its towels in Venice Beach and waffle weaves them in Denizli, Turkey, using 100% long-staple Turkish cotton. I packed two of these for a week away this past January, and they took up less space in my luggage than my socks and underwear. Bring one of these along when staying in a potentially unsavory BnB or when crashing at the in-laws. (Just be chill about it.)

Also known as the “Most Likely to be Found in a Luxury Hotel Award.” Brooklinen launched via Kickstarter in 2014, promising DTC sheets, and has now evolved into a $25M+ business with a range of bed and bath offerings. Their bath towels haven’t disappointed, and they’re cumulonimbus-level plush thanks to another instance of long-staple, Turkish cotton. Our one slight critique would be: all that softness can come at the sacrifice of fast-drying tech you’ll find in other towels.

Coyuchi is credited by some with “introducing” organic cotton to home textiles in the States. The NorCal company has been around since 1991 and claims international certifications from Fair Trade USA and the Global Organic Textile Standard for its commitment to eco-conscious fabrics woven in sustainable factories. Which is all lovely and wonderful. But I’d be blushing around their gorgeous Mediterranean towels either way. Also made in Turkey, these towels feel crazy smooth on the skin (almost like a bed sheet), and absorb well, considering how thin they are. Not to mention, a warning: you kind of feel like a sultan with one around your waist.

I was actually stunned to see these towels only cost $22. Part of the reason is Snowe’s aggressively zero-middleman business model — there’s a set of steak knives on offer for $60, for instance — but rest assured, the quality here is still top-notch. Snowe manufacturers its towels in Portugal using a Japanese method that spins cotton fibers with air, allowing for an ideal plushness to breathability ratio. A slight hiccup here is these towels fall on the shorter side.

This towel is consistently bone-dry in minutes. It’s pretty impressive. Another long-staple cotton fabric, Ethohome towels are engineered to dry before mold or microscopic bacteria set in, even when you (inevitably) forget to hang to it properly post-shower. Which, for reference, involves laying it out clothesline-style over the top of your shower bar. The honeycomb fabric is reminiscent of Onsen (big points) but the length of the towel comes up a bit short, similar to Snowe (argh).

The only towel here produced by a big corporation — Pottery Barn — but the drop-off in quality isn’t as steep as you’d imagine. Aerospin’s towels are 100% organic cotton and studded with fluffy squares using an advanced spinning technique. Biggest takeaway is they’re super heavy. One Aerospin towel is probably the weight of 2.5 Parachute towels. That’s fine, though. I have no plans on packing this towel for travel. It’s a good bulky winter towel, and finishes in second place here for affordability.