Toward a Definition of LA's “Regional” Cuisine

More than any other American city, LA's gastronomy is becoming a genre all its own 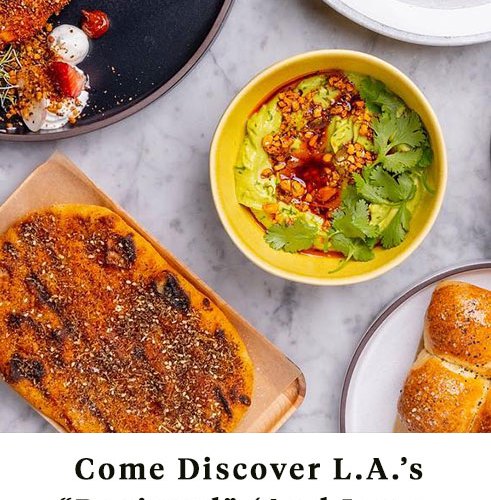 If you want to know what will be served at your next dinner on the town in L.A., visit the Santa Monica Farmers Market on a Wednesday morning. There, around 80 regional farmers gather in stalls overflowing with one of the widest selections of vegetables, fruit, flowers, meat and dairy in all of America. It’s an occasion that tends to attract chefs from the city’s best restaurants, each of them bending the ear of one vendor or another to gauge what’s most season.

This Wednesday I’m standing next to Vartan Abgaryan, the chef behind Yours Truly in Venice. We’re in front of Peads and Barnetts, which sells pork and a variety of South African flowers, talking about (what else?) the state of dining out in the city we both call home.

“There’s definitely a good amount of restaurants where you’re like, ‘You can’t eat this anywhere else,’” says Abgaryan. “And, in a way, that’s really great, because, there’s been a massive renaissance of food in L.A.”

There are a lot of restaurants because there are a lot of people. Though growth slowed in 2018, the city population is up 2.9% from 2010. L.A. is home to more cultures than any other American city, and when chefs want to explore for inspiration, the world is at their fingertips.

Out of Many, One

“I have lived in L.A. for almost 30 years,” says Abgaryan. “When you go to restaurants and you see food that’s very multicultural, I feel that’s very L.A. — not necessarily California, but very L.A.”

You can see this multicultural fusion in Abgaryan’s own avocado hummus. “I wanted an avocado hummus,” he says. “But there’s no chickpeas. The base of it is completely how a hummus base is made [except with avocados], and I use poblano and jalapeño to spice and season it, to give it depth and flavor.” He then seasons it more with white soy and yuzu, tops it with a salsa macha and serves it with fresh baked za’atar flatbread.

In some ways, spreading the whipped dip is also a play on avocado toast, another L.A. staple. “I love blending, I love eating, I’ve always loved food. I think blending cultures, for me, is more exciting than anything.”

Not far away, in Santa Monica, Susan Feniger and Mary Sue Milliken just opened SOCALO, a continuation on the Mexican themes they’ve played with for the past two decades at Border Grill. Among the salsas on offer is a macha version, in which three chilis (chipotle, arbol, guajillo) and three sets of toasted seeds (pumpkin, sesame, almond) are fried in oil with garlic and then pureed.

They’re explaining this as we’re looking at their Vampiro Tacos, a Tijuana-style street taco in which the cheese is fried into a tortilla then topped with steak, shrimp and a spoonful of the pungent salsa. Feniger explains the process of making the salsa: “It’s just slow, very slow … slow simmered at the very end with all the chilies in there so you draw all the oil out of the chilies. You’ve got to really dig in there. But you want the oil, because that’s where all that flavor is.”

Milliken adds, “It’s a Chinese technique, the chili oil. I go to a dumpling place in San Gabriel that has tons of anise seeds and fennel and a ton of chilies and you stir it up and you put it on your dumplings.”

If anyone is qualified to speak to the evolution of our city’s food scene, it’s these two. Feniger and Milliken started their first restaurant, City Café, in the ‘80s. It was on Melrose, during the punk age, when the haircuts were asymmetrical and the diet of choice was beer. In 1985 they opened the first Border Grill on Melrose in Hollywood. A second location followed in 1990 in Santa Monica, pre-Promenade days.

As Milliken recalls, “When we came home from Mexico the first time, we brought chipotle chilies in our suitcase and we couldn’t find them here and there wasn’t a chain of restaurants called Chipotle. It was a new flavor, this smoky chili nobody had ever heard of. We started serving it in ‘85 and it was our go-to.”

If It Looks Good on Instagram, They’ll Eat It

Milliken says the biggest change has come from the diners themselves. “The diners are so much more astute and exciting to cook for because they’re so much more adventurous and know better what to look for. They’ve been watching the Food Network since they were children.”

Milliken and Feniger are a big part of that audience-education, given that they were the original co-hosts of popular KCRW program Good Food as well as creators of the Food Network’s Too Hot Tamales.

Diners also arrive armed with something else: Instagram. “So many people want to go and take that picture and have that experience even if it’s not amazing,” says Sam Azarow, General Manager at Bon Temps. “You can hold on to that picture forever. You’re going to go and spend your money on it because that’s valuable.”

In a town so image-conscious, trends tend to gather steam more readily. And the biggest one that Azarow sees is a movement toward fresh, colorful dishes that combine local ingredients with a variety of ethnic influences. “In LA, people like their food stacked on top of itself so they can see everything they have and then they can mix it together and get the perfect bite,” she says. At Bon Temps, that shows in a dish like the salmon bowl with a freekeh salad: the contrast of the charred avocado, ruddy radish sprouts and grains make for a palette that truly pops on Instagram.

“That’s what makes people excited: when they think they’re going to have the perfect bite,” says Azarow.

It All Comes Down to Produce

When you think about the colorful, beautiful dishes that are emblematic of contemporary California cuisine, they often owe to one simple detail: an abundance of fresh herbs and veggies. But Milliken remembers a time — probably before the ‘90s — when they were harder to come by: “I remember when Wolfgang (Puck) used to talk about how he couldn’t find fresh basil.”

Feniger and Milliken’s restaurants have always given veggies their due. “I think, from very early on, even with City, we have always been big proponents of vegetables,” Feniger says. “At City we served them with every entrée, even if it was a plate that [already] had vegetables on it. We always served them family style, a plate to every table, with all the vegetables you hated to eat as a kid: rutabaga puree, parsnip chips, shaved Brussels sprouts.”

And while chefs elsewhere served Brussels sprouts the bad way — with a ton of bacon, deep fried, maple-glazed, etc. — L.A. chefs tended to espouse a more holistic approach. “That seems like cheating,” says Milliken. “It also seems like it’s cheating your customer’s body, because it’s easy to make something addictive-tasting. How about doing it and having it simultaneously be healthy?”

It’s a feat made easier when the roster of vegetables at your disposal is long, varied and full of unique flavors. At Birdie G’s, Chef Jeremy Fox is playing with persimmons, leeks, fennel, beets and multiple varieties of mushrooms. At Yours Truly, you’ll find sunchokes with pears and curry, or parsnips with dates. At American Beauty, you’ll find a jerk-style hamachi collar covered in herbs and cucumbers, and at Nomad that same hamachi collar will come turmeric-battered, tempura-fried and speckled in cilantro.

While Milliken thinks that L.A.’s produce scene has always been best in class, “the variety has really grown in the last 20 years to be even more exciting than anywhere else on earth,” she says. “I go to markets all over the world and you just don’t see this kind of variety. And the seasonality! You can get these mangoes for three weeks a year at the Wednesday market and they’re absolutely like no other mango you’ve ever eaten. I’ve been to the Mango Festival in Pakistan, where there are 18 kinds of mangoes, but nothing like the mangoes here.”

Add in a growing commitment to sustainable, regenerative farming, and that trend will only continue to bloom in the coming decade. California isn’t the only state with seasonal farming, but it’s the one where it’s most widespread, diverse and fecund year-round. And that steady supply of great vegetables is the defining quality of a cuisine that is otherwise unrooted from any one tradition, where borders dissolve into something fresh, delicious and distinctly Angeleno.