"When you read the history of Angostura, it's a history of perseverance."
Jake Emen
By Jake Emen @ManTalkFood 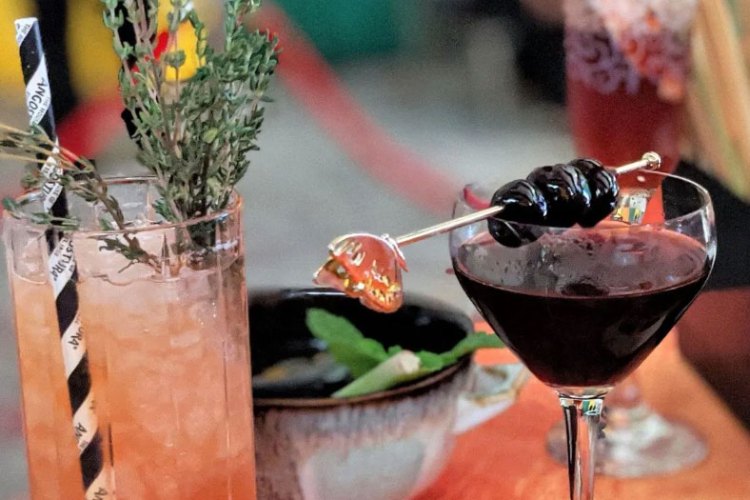 Somewhere around the twelfth time you hear this intoxicatingly catchy refrain in the Iwer George soca jam “Savannah,” you and your crew of early morning Carnival revelers may well find yourselves in that very position, rum drinks in hand, dancing your way up to the Savannah — the Queen’s Park Savannah — a large grassy park and central hub in Port of Spain, Trinidad and Tobago. The soca is now as much a part of your soul as the rum is a part of your blood, and if you’re studious with your sugarcane spirits, you may recognize the name of your locale for something else: The Queen’s Park Swizzle.

The iconic rum cocktail was named for its place of origin, the now defunct Queen’s Park Hotel, located adjacent to the Savannah itself. The drink’s combination of rum, lime juice and mint strikes a similar chord to the Mojito, with a few notable exceptions. Darker, richer rum is called for in the QP Swizzle, which then gets the second half of its name thanks to the art of swizzling: the drink is served over crushed ice in a glass that’s frosted and chilled to the touch by the process of a bartender rubbing a swizzle stick, essentially a straight rod adorned with several spikes, between his palms as if trying to start a fire. The icy libation is then topped with a generous dose of Angostura bitters, proudly floating in a layer atop the drink like a crown.

Angostura, of course, is as much of a part of Trinidad as soca and the Savannah and Carnival, with the company based on the island since 1875. All of those forces work hand-in-hand, and to experience them together, the right drink for the right time, the right mood and the right setting, is to feel as full of an expression of a people and a place as it’s possible to conjure.

“Angostura and Trinidad are inextricably linked,” says John Georges, long-time Angostura master distiller. “It’s one of those things that we bring to the world. That’s something you have to be proud of, because at the end of the day all you can give to the world is your creativity. In Trinidad, we can dig oil out of the ground and make money. But how much better is it to make this product that can’t be made anywhere else, and give a part of yourself to the world? It makes you feel like you’re really contributing.”

Or in the words of Christopher Leacock, aka Jillionaire, the Trinidadian DJ and producer most well known for his stint in Major Lazer, “Angostura is our identity here.” Plastic cup of Angostura rum in his hand — Angostura has been distilling rum since the 1940s, and also produces amaro as well as orange bitters in addition to its original aromatic bitters — Leacock was speaking not only as a local enjoying the local wares, but also in the official capacity as a judge for the 2020 Angostura Global Cocktail Challenge, held over Carnival in Trinidad.

That identity within the country is almost 150 years old, while the company that would go onto be known as Angostura began producing a medicinal bitters tincture even further back, in 1824. Founded by Dr. Johann Siegert, a German by way of Venezuela, the bitters soon took on the name of the town from which they hailed, Angostura. (The town’s own name was soon changed to Ciudad Bolívar, for Simón Bolívar, the armies of whom Dr. Siegert initially came to Venezuela to serve as a surgeon.) Siegert’s sons took the family company to nearby Trinidad a few decades later, and it wasn’t long before Angostura had a firm standing within the nascent cocktail scene emerging in the saloons of the United States.

Angostura wasn’t the only bitters on the scene, and certainly not the only one with purported medicinal applications, either, but it passed the test of time like no other was able to. “We are the bitters not only because it’s a top notch product, but also we would not have gotten there without the right circumstances,” Georges says.

“In the early days of cocktails, we were not the only bitters,” Georges continues. “Come Prohibition, many got wiped out. Who was left standing? Who was still there? We were. Then after repeal we find ourselves as the definitive ingredient in any number of cocktails.” Georges describes the brand and the people behind it as battlers. “When you read the history of Angostura, it’s a history of perseverance,” he says.

Nearly 200 years after its initial founding, it’s not a stretch to call Angostura bitters the most ubiquitous bar product in the world.

This supermarket staple, its trademark overextended label jutting into the air above the shoulders of its glass bottle, is something that every imbiber has seen at every bar she’s ever been to. However, in its modern renaissance, it’s being appreciated as never before. There are hundreds of brands of bitters available today, but rather than crowding out the old stalwart, the competition has made the standard-bearer become all the stronger, shining for its quality, consistency and versatility. It’s no longer taken for granted as simply what’s available, but rather hailed for what it uniquely brings to the table.

It’s likely the first purchase of any novice home bartender, and if you have room for just the one variety, it’s likely the pick of the litter as well. It’s found in a who’s who of classics — the Old Fashioned, the Manhattan, the Champagne Cocktail.

For the real Ango-heads out there, you can do a shot of the stuff, long popular as a bartender’s handshake, or put a shot’s worth into the a drink such as The Trinidad Sour, a cocktail from Giuseppe Gonzalez which has graduated into the domain of the modern classic. The recipe calls for a staggering 1.5 ounces of Angostura bitters alongside an ounce of orgeat syrup, .75 ounces lemon juice and .5 ounces of a sturdy rye whiskey.

“It’s really cool to make a drink like that and just put a fuckton of Angostura in there, and actually use the bitters as a key flavor ingredient,” says Eryn Reece, a veteran of the New York cocktail scene and current bar director of Banzarbar, in Trinidad as a judge for the competition. (She’s not the only bartender I’ve heard reference a “fuckton” of Angostura, a measurement which seems to be a more or less readily known quantity, like a pinch of salt.)

The best place to see the many modern, innovative uses of Angostura was of course at the Angostura Global Cocktail Challenge. For instance, the competition’s winner, Marv Cunningham of The Bahamas, served up the Mas-Curried, a rum cocktail spiked with a curry shrub and lime juice, and showcasing both varieties of Angostura bitters along with influences from Trini cuisine. Other competitors showcased beverages incorporating everything from dill to cold brew coffee. Somehow, of course, it all seemed to work.

“Angostura bitters is magic in a bottle,” Georges says. That’s true whether you want a fuckton of it, or just a few dashes in your favorite classic.