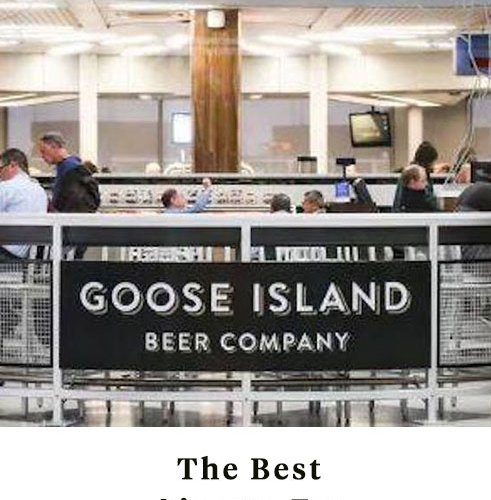 As many of us prepare to head home for the holidays, we’re gearing up for all the usual headaches we’ve come to expect from air travel this time of year: massive crowds of frantic passengers all desperate to make it through security in time, a total lack of available overhead compartment space, long delays as the latest winter storm wreaks havoc on our plans. Sometimes, all you can do to preserve what’s left of your sanity is find your way to the airport bar and throw a few back.

But while desperate times call for desperate measures, you don’t have to settle for an overpriced Bud Light. More and more airports have embraced their local craft breweries in recent years, serving up their beer to weary travelers and craft beer enthusiasts alike. No matter where you’re headed this holiday season, you’re likely to pass through an airport that offers a solid beer selection. Here are 10 of the best — whether you’re looking for an unbelievable IPA south of the Mason Dixon, an Oktoberfest in the Midwest or something in between.

Up until a couple years ago, PDX would have been cited as one of the best craft beer airports for an entirely different reason: tourists and fans of the city’s Rogue Ales were able to visit the brewery and buy bottles of favorites like its Voodoo Doughnut Maple Bacon Ale to carry on to their flights. Rogue left in 2017 at the end of its 10-year lease, but thankfully, another beloved local craft brewery moved in to replace it. Deschutes’ airport location features 15 of its beers on tap, an original menu and gift items for sale.

Goose Island fans have plenty of options at O’Hare, and last month, the brewery even gave passengers the opportunity to participate in its Black Friday release of its popular Bourbon County stout, serving the 2019 edition on draft at the airport. But if you’re looking for some other local brews, the beer list at the Publican Tavern in Terminal 3 includes Half Acre, Revolution and Off Color.

Fans of Colorado’s largest craft brewery, which was recently sold to Australian-based Little Lion World Beverages, are sure to find something they like at the New Belgium Hub’s 20 taps, which include favorites like Voodoo Ranger IPA and Fat Tire Amber Ale as well as seasonal offerings and limited releases. It’s also a full-service restaurant, with a menu the brewery describes as “relentlessly local American food.”

If you ever find yourself passing through Tampa, do yourself a favor and grab a Jai Alai IPA from Cigar City. If you’re at all a fan of citrusy hops, it’s a must-drink. (And you prefer something maltier, the brewery’s Maduro Brown Ale should hit the spot.) The brewery also goes above and beyond most airport outposts, showcasing a three-barrel system behind glass windows so passengers can watch the brewing process.

Cleveland’s most beloved craft brewery sells six- and 12-packs to go at its airport outpost beyond security, meaning you can carry your booze directly onto your flight after you buy it. But if you’d rather sit down and savor favorites like their Edmund Fitzgerald Porter or their seasonal Christmas Ale, you can do that here too while snacking on Eastern European-influenced fare like pierogis, bratwurst and pretzel-crusted chicken.

A scaled-down version of San Diego’s Stone Brewing World Bistro & Gardens, this airport spot features 10 Stone beers on tap as well as two taps devoted to a rotation of other craft brewers like Port Brewing, Ballast Point and Green Flash Brewing. You can also choose from seven bottled options — four Stone favorites and three from other local craft breweries.

Up until recently, SFO was home to an Anchor Brewing location. But fortunately, you can still get your fix at the airport’s Union Street Gastropub, which offers a whopping 30 beers on tap, including brews from Firestone Walker, Lagunitas, Goose Island and more.

You don’t even need a ticket to visit DuClaw’s airport pub. Located outside of security, it’s open to the public — perfect for when you’re dropping off or waiting to pick someone up — and while it offers 10 taps as well as a tasting flight of four beers for $10.

Stone Arch showcases the best of its local craft beer scene: every beer on tap is brewed by a member of the Minnesota Craft Brewers Guild. It also boasts a “Craft Lab,” five rotating taps where guild members who want to test out something unique or show off a new recipe sign up to have a representative on hand to discuss their beer and engage with travelers.

Sour beer fans, rejoice: the newest location on this list, Wicked Weed just opened its Charlotte airport spot this fall. The bar, located between concourses D and E, features 24 taps, including some of the Asheville brewery’s flagship beers like its Black Angel Cherry Sour or its Pernicious IPA.