Drink Vodka Like the Russians Do: Infused With Pepper 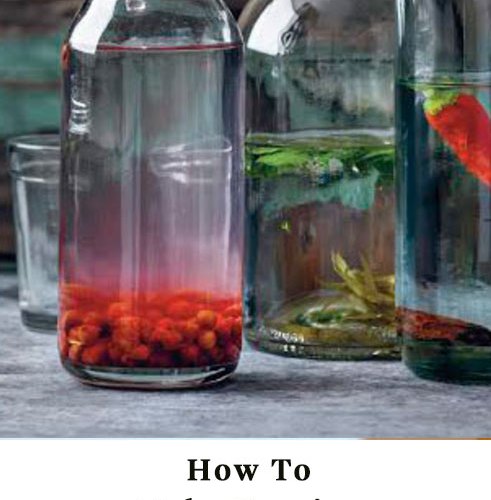 Kombucha wasn’t always the sweet, bubbly drink we see in stock at every health food store or even on tap at bars in Williamsburg or Silver Lake. Though they may not be the first, Russians have been drinking it for hundreds of years. In fact, traditional Russian gastronomy included many practices that are now sought after for their health benefits, from fermentation and slow cooking to whole grains and organic produce. In the 1920s, Russian food grew in popularity as Russian artists and dancers moved to Paris and New York. Restaurants like The Russian Tea Room gave the cuisine a good name, but the glamor of it waned during the Soviet era. Now, because we tend to believe that Russian food isn’t much more than potatoes and vodka, it’s hard to see the influence of Russian traditions on modern day culture. Darra Goldstein’s cookbook Beyond the North Wind does well to dispel this belief. Though it does have recipes for potatoes and vodka. The belief wasn’t founded on nothing, of course.

“There’s definitely an alcohol problem, but the stereotype that all Russians are drunkards is not true.” Goldstein tells InsideHook. “What I want to convey in the book is that vodka is also a more positive part of the culture when it is not abused, such as taking alcohol and infusing it with extraordinary flavours. Vodka’s original use was medicinal, using different properties of herbs and different flavors to heal. But also as a sort of social lubricant in a positive way. Enabling the long and very beautiful, poetic toasts that the Russians give whenever they gather.”

Infused pepper vodka, in particular, is a widely popular recipe in Russian culture. Plain vodka is the staple drink in Russia, but when it comes to infused spirits, pepper vodka is the go-to. In addition to accompanying celebrations and general merriment, its healing properties make it the perfect remedy for a cold. “What I learned to do when I have a cold coming on is to drink the pepper vodka, wrap my neck and throat in a scarf and have black bread with a little bit of honey and raw garlic. Honey has antibacterial properties, it’s especially good for a sore throat. Raw garlic has tons of vitamin C and the reason there is so much garlic in Russian cooking is because it was used for medicinal purposes. And vodka with the hot pepper kills germs,” Goldstein says, “though this treatment works, no one wanted to be near me because I smelled so bad.”

Though it was originally intended just as medicine, it clearly didn’t remain as such. After hundreds of years of enabling from the government, who wanted to tax benefits, it has become the social lubricant—as Goldstein calls it — that it is today.

Needless to say, you can enjoy the spirit in full health, but Goldstein recommends you try it the way the Russians do; by itself. “The Russian way of drinking vodka is to keep it ice cold, so it’s a little bit viscous, and you put it into a shot glass and you toss it back. You don’t sip it. I mean, if people want to sip it, I allow them to, but the sensation of tossing it back is really wonderful,” Goldstein says. It can cool you down in the heat of summer or warm you up in the dead of winter.

Pepper vodka is one of Russia’s most popular infusions. It packs a different kind of punch from horseradish vodka, with a nice hint of spice. This vodka infuses longer than the others I’ve included, so you’ll want to taste it daily until it reaches the peak of heat that you like. I find it just right after three or four days, but you can infuse it for up to a week.

Transfer all but two tablespoons of the vodka to a wide-mouth 1-quart jar, reserving the original bottle. Remove the stem from the pepper and score the skin in three places to enable faster infusion. Drop the pepper into the jar.

Slightly crush the peppercorns, allspice, and cinnamon in a mortar with a pestle and add the spices to the jar. In a small bowl, stir the honey with the remaining two tablespoons vodka until the honey dissolves, then add it to the jar. Close the lid and allow the vodka to infuse at room temperature for at least three days. Strain the pepper and spices and transfer the vodka by means of a funnel into the reserved bottle. Chill well before serving. The vodka will keep indefinitely in the freezer.

“Reprinted with permission from Beyond the North Wind: Russia in Recipes and Lore by Darra Goldstein, copyright © 2020. Published by Ten Speed Press, an imprint of Penguin Random House.”

What Draws So Many Boomers to America's Largest Retirement Community?
Is the "Au Naturel" Approach to Body Hair Making a Comeback?
How America’s First Film With Nudity Ended Up Banned in DC
Why You Should Never Lift Weights in Running Shoes
The 2021 Uni Watch NHL Season Preview