What’s a flyback chronograph? Sexy as hell, for starters.

When purchasing an everyday wristwatch, you want to keep things simple.

A few basics to look for:

Trusted craftsmanship. Complications that are actually useful. And a head-turning design.

All of which can be found in Oak & Oscar’s third release: The Jackson flyback chronograph, of which only 400 pieces will be made.

If you’re familiar with the Chicago label, you know the names of their timepieces are no small matter. Here, the Jackson refers to Jackson Park, where, on Thanksgiving 1895, the first official road race began and ended. The 54-mile Chicago Times-Herald race took about eight hours, with an average pace of 7 MPH.

The release joins the three-hand Burnham and Sandford GMT in Oak & Oscar’s collection, and with the newest number, the upstart brand is really flexing its horological muscles.

“It is somewhat of a natural progression to go from the classic face to the GMT to the chronograph, because those are three very good watch types,” says O&O founder Chase Fancher. “To be honest, the GMT [for Greenwich Mean Time] is my absolute favorite complication. Chronographs are a very close second.” 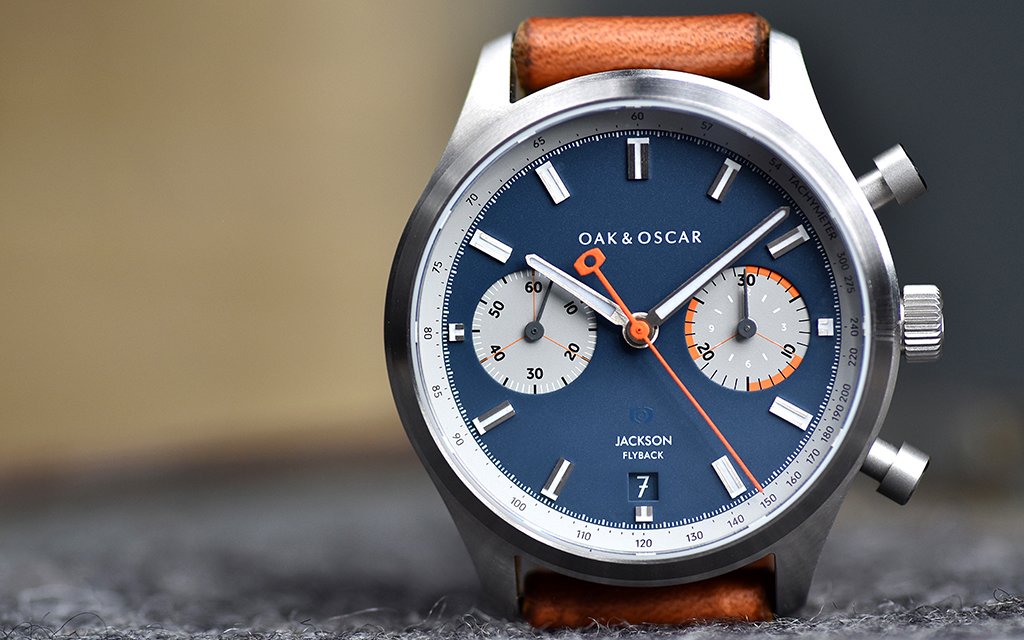 For the Jackson, Fancher sought out a top-of-the-line movement, worked with a new Swiss production company and expanded the partnership with Indiana leatherworkers Woodnsteel.

“One of the biggest things we did was move to Swiss-build team Walca, because we knew the quality would match the movement, match the actual piece itself,” says Fancher. “We could actually stamp all of these on the dial with ‘Swiss-made,’ but it’s not our priority and I don’t think that’s the right step for our brand.”

The end product is a stainless steel and leather beaut: a 40mm manual-wound flyback chronograph with 60-hour power reserve, two subdials (one stacked) and Super-LumiNova indices.

Of the flyback denotation — a chronograph with an automatic reset function that doesn’t involve stopping and resetting (the hand flies back) — Fancher says, “To be 100% honest, it comes with the [Swiss-made Eterna Caliber 3916M] movement. That was something that’s an added bonus. The flyback is one of those cool complications that isn’t around much, it’s not very affordable in most watches.”

For a watch aficionado who travels the country after each release to show off his new wares and speak directly with potential customers, picking out an enticing movement is just one example of an acute attention to detail. Another is the leather, from the included tapered strap and orange rally strap to Oak & Oscar’s watch wallet.

“Dustin of Woodnsteel — who for the first two models made the leather strap — is for this model actually making the leather straps and the leather watch wallets,” says Fancher. “What’s cool for me is, over the years, I’ve been able to actually grow his business, in hiring employees and buying more machines. He stepped up and said, ‘Hey, let me take a crack at it.’”

Oak & Oscar’s first watch (The Burnham) sold out of 300 pieces in less than a year. The Sandford, their second, sold out in less than seven months. So you can bet your britches the Jackson will go faster, despite there being 400 available (150 in grey, 150 in navy and 100 in charcoal PVD).

And since pre-sale pricing (happening right now) will get you $200-$300 off the retail price, best get them while they’re hot.