Author Jayson Greene on Learning to Live After an Unimaginable Loss 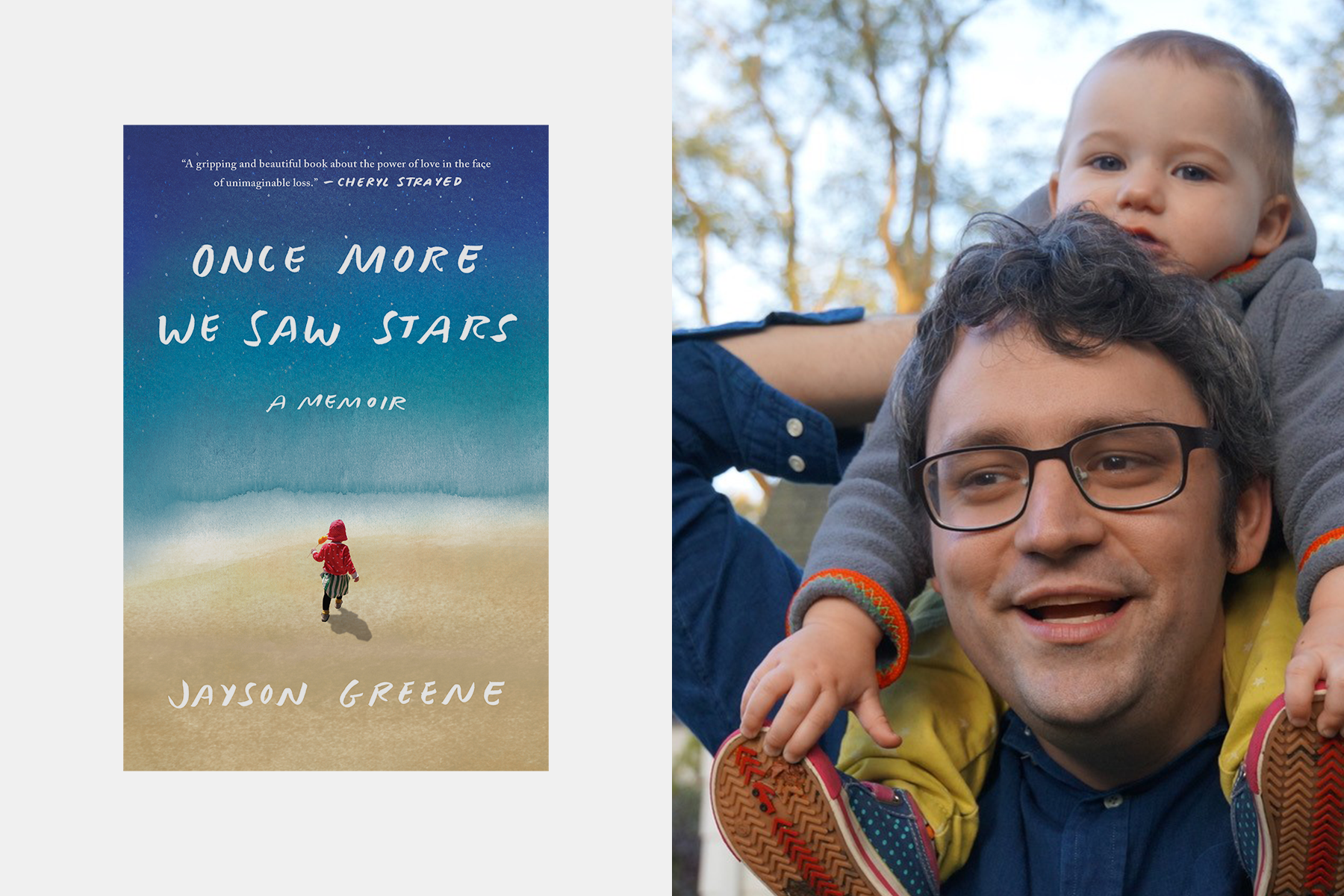 Jayson Greene wasn’t a particularly spiritual person when he lost his two-year-old daughter, Greta, in 2015. But tragedy is often an unpredictable experience that can shove those who undergo a profound loss into directions they otherwise would never have considered.

On the day that Greene and his wife, Stacy, lost Greta, they were giving themselves a much-needed break. As Greene tells it in his new memoir, Once More We Saw Stars, the toddler was staying with Stacy’s mother, Greta’s Grandma Suz, when the tot was struck on the head by a piece of brick that dislodged and fell from the eighth story of Susan’s Upper West Side apartment building while the two sat on a bench below. By the time the couple rushed back into the city from their weekend away — just hours after the accident — it was too late.

Over the course of his book, in both gut-wrenchingly intimate detail and surprisingly funny anecdotes, Greene explores this loss and his and Stacy’s path toward healing.

“I started writing for myself as a way of comprehending what was going on with me,” Greene tells InsideHook. “I didn’t make a conscious decision that what I was writing would be a book, I just acted. It was a way of responding to an acute trauma. Sometimes I would just write down the words verbatim that I just said to someone or words to my therapist and it was just for me. I wrote like that for months after the accident and gradually, I felt like I was pouring something out of me.”

Greene says the physical act of writing down everything he was seeing, feeling and experiencing in those first few days and months without his child was like trying to keep a damaged boat above water.

“The grief felt like a hole in a boat that was letting in water and you bail to stay afloat but the hole is never going away and what’s coming through you have to bail over the edge without taking on too much weight,” he says. “I told my mom I was writing everything down and she said offhanded, like mothers sometimes do, that I might want to ‘use that’ some time. Looking back, it made me write more consciously without thinking of an audience or too far down the road.”

After about six months of dictating his life to himself, Greene says he had thousands of chronological notes that he could point to and reference the moments that are most poignant in the book: the decision he and Stacy made to donate Greta’s organs when it was clear that she would not recover, the heartache he saw in the faces of everyone who loved Greta at her memorial service, an instance of grief group rage and the unexpected spiritual vision Greta gave him.

“I grew up in the suburbs where people went to church but I never had to insist on if I had beliefs or not,” Greene says. “Stacy was exposed to spirituality a little more so in her childhood than me. I grew up secular and oblivious to the need for a spiritual community, I was always a believer in energies not observable. But when Stacy and I were groping for Greta, we found ourselves open to the possibility of finding her.”

In their search, Greene’s wrenching memoir found a comedic relief in religion — for himself, Stacy and his readers.

“We didn’t have [religious] behaviors to follow and as a result we were two grown people lost at the buffet of spirituality not knowing what would resonate with us,” Greene says. “There’s this possibility for comedy in a situation like that, of feeling silly in failing because we didn’t know what we were doing. It’s kind of a beautiful, metaphysical echo of parenting itself. You can read all the books on it that you want but then there’s this little person screaming on your floor and it becomes apparent fast that I don’t know what I’m doing.”

Just like the comedy that can be found in the sleepless, unwashed, confused existence of first-time parenthood, Greene says there’s a similar laughing-at-yourself attitude he accepted when trying to assimilate into his new existence.

“If I couldn’t appreciate the comedy of being alive, then I couldn’t value my life,” he says.

In a bizarre experience that becomes the pinnacle of Greene’s journey through Once More We Saw Stars, he and Stacy find themselves on a spiritual retreat in Santa Fe, New Mexico, where they meet with someone who possesses the key to communicate between this physical world and the one beyond it.

In a scene that includes an adult game of hide-and-seek, of sorts, the Kamikaze-ing death of a bird and its subsequent dismemberment, you can’t help but laugh at how awkward it is to enter into someone else’s spiritual reality with zero background or context of your own. But when the Greenes allowed themselves to lean into the experience, Jayson says Greta led each of her parents through separate visions that ultimately helped them cope with the shock of losing her.

I told my mom I was writing everything down and she said offhanded, like mothers sometimes do, that I might want to ‘use that’ some time.

“Religion, parenting, it’s a referendum on who you are and you basically have to be there and be present or you won’t get the benefit of reflection or hindsight,” Greene says. “There was this stumbling for meaning. It reads on paper as an orderly spiritual journey, and I laugh at that. But she found us.”

It’s impossible to reflect on the story that Greene has decided to share with the world without constantly referring to Stacy — because that’s exactly what he does. In every scene, Stacy is there, stoically taking in everything happening around her. She’s not the particularly vocal half of this remarkably strong couple, but she’s just as much the narrator of their heartache as Greene is; and the director of this script.

“I wrote the words and she was my spiritual compass,” Greene says lovingly of his wife. “She would say, ‘this is not the story,’ and she brought me back to it when I would go off course. She was the only other person in the world who could do that. I’m a talker, I’m hyper-verbal, everything I do is through talking and writing. Stacy’s not a writer, but she still wants her story told.”

And in their understanding that Greene would be the one to tell the world what happened to them, their conjoined family — like, each of their parents, siblings and friends who might as well be family, who each has his or her own spotlight of grief in Greene’s book — rallied behind the cause.

“Our story wasn’t just ours,” Greene reflects. “It wasn’t just me who this happened to; everyone had this sense of our story, of Greta’s story. I’m the storyteller so my family gathered behind me and was like, ‘make sure you include this,’ and every step was about consulting with the various people who were a part of Greta’s life and loved her. There was a lot of ‘read this,’ and ‘what did you feel then,’ or reminders like, ‘you didn’t mention when this happened.’”

It was in their support of the story he was telling that Greene found a sense of peace from his encouraging family and wife instead of rebuttal or resistance to his version of what happened to them.

“It was very different from other memoir writers who have to deal with opposition from others that dispute what they write,” Greene says about his book in relation to his family. “A lot of people who write memoirs have to deal with people objecting, but in a way we were all rallying around Greta, so in some ways we all subsumed our egos and versions of the story to just tell Greta’s story.

“My wife, me and Susan experienced this tragedy, I think that Stacy was the number one person in that room saying those things to me, that I was telling our story.”

If I couldn’t appreciate the comedy of being alive, then I couldn’t value my life

Although the memoir is absolutely a tale of recovery, healing and found spirituality, it is also a raw, uninhibited display of unimaginable grief. As one who’s been so open about this rage-filled, angry-at-the-world, howling pain, Greene says he’s become the recipient of so many stories from other parents of children who have died — and of those who have lost anyone in a sudden, unexpected way. It’s an honor, he says, to be granted the privilege of witnessing other people’s private pain.

“The other grieving parents we’ve met and the circumstances of their loss — there’s something so awful and beautiful about being able to connect with someone over that,” he says. “There is a deep need to find others to make sense of it. When you have a baby there’s a community of people doing it too and you pool your collective resources all at the same time. But when a child dies, there’s the same need to know what to do and there are very valuable support groups but they can be hard.

As for what impact the Greenes’ story will have on readers, the author is willing to just embrace whatever comes next.

“There is this delicate dance you do when I don’t think I can ask myself or expect to necessarily be 100 percent present for each and every person who comes my way, but I do try because the effort is so meaningful to me; it’s so profound. I’m still feeling my way though that. You have to offer what you can give. It will be interesting to see where Greta and this book takes us.”