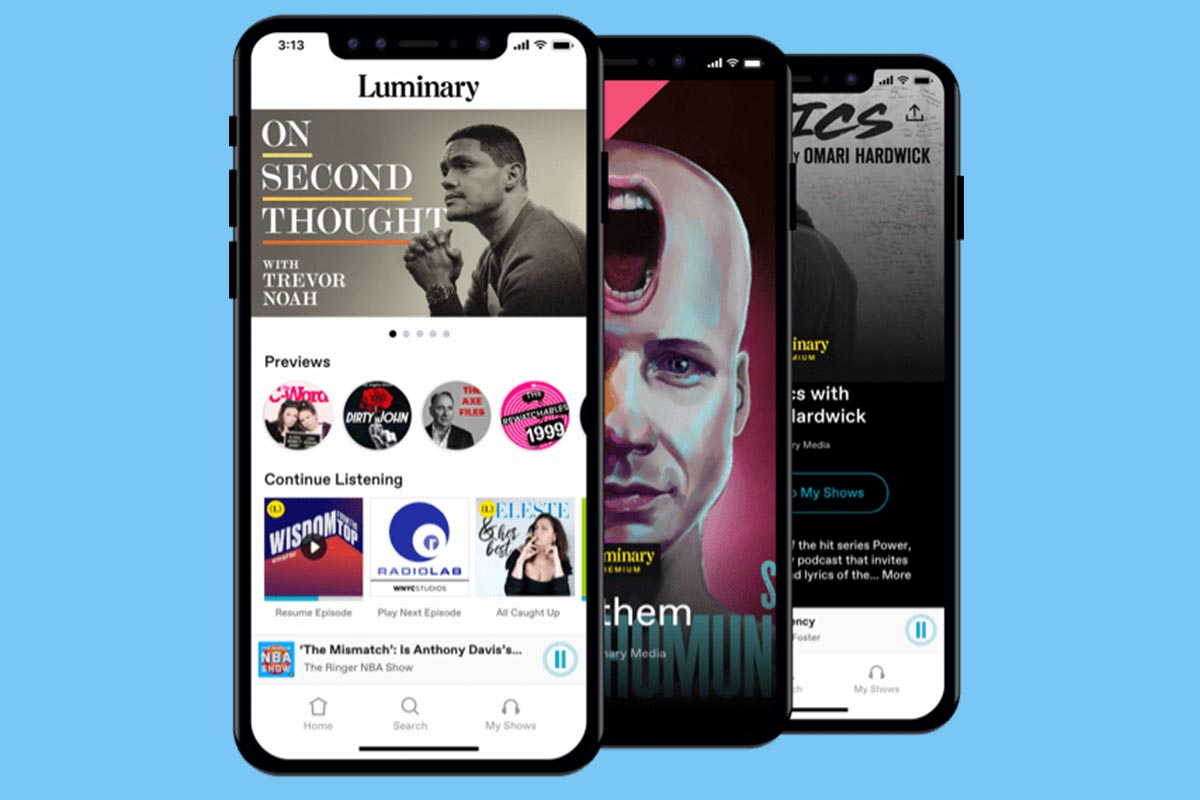 Luminary wants to change how you listen to podcasts.

For starters, it wants to charge you.

Launched this week, the unofficial “Netflix for podcasts” will be ad-free for premium users, but will also be missing several popular podcasts (The Daily, Reply All, Homecoming, etc.). Backed by $100 million in funding, Luminary is hoping to lure people in with exclusive content from the likes of Trevor Noah (The Daily Show), Lena Dunham (Girls), Kamaro Brown (Queer Eye) and Adam Davidson (Planet Money).

It could work — as Product Hunt points out, China’s podcast business is 23x more valuable than it is in the U.S. due to paid subscriptions, and podcasting ad revenue is expected to quadruple to $1.6 billion in the U.S. by 2022. At $8 per month, Luminary will be on par with Hulu or the upcoming Disney+, and catering to a different crowd with a ton of new, A-level content available each day … albeit with the majority of those podcasts also available elsewhere for free (and don’t forget those holdouts, which you’ll still have to listen to on other apps).

There are way too many podcast apps, and each one does something different or unique, so below, we simply offer a few immediate alternatives to Luminary while we test the service out fully.

If you’re already paying for another audio app: The paid versions of Spotify, Pandora, and TuneIn give you varying access to all the top podcasts while offering the advantage of being on an app you already use to stream music or radio (ad-free, too). Plus, Spotify’s been going on a podcast buying binge, snapping up content creators like Anchor, Gimlet Media and Parcast while investing hundreds of millions in developing new content — making it the, ahem, “Netflix of podcasts”; meanwhile, Pandora’s relationship with SiriusXM means several “original” podcasts (based on SiriusXM shows) are already in the works.

If you’re on cheap and using iOS: Overcast earns numerous accolades from its minimalist but decidedly user-friendly design, while offering perks like offline playback, push notifications for new episodes, a voice boost that adjusts too loud/too quiet voices and “Smart Speed” (which shrinks silences and does other tricks to pick up speed sans distortion). A premium, ad-free version is available for just $10 per year.

If you’re cheap and using Android: The good thing about Podcast Republic is that it’s a solid, free podcast option with some nice bells and whistles (custom playlists, scheduled podcasts for wakeup, playback via “shaking actions” instead of opening your phone) but it’s also where you can manage and listen to radio, local audio files, audiobooks, YouTube channels or even subscribe to RSS news feeds all within the app.

If you’re all about helping the smaller podcasters: RadioPublic is like the kindly librarian of podcasts. Even though it’s free, you won’t see banner ads — instead, you’ll just find curated show suggestions from the RP team (who are, yes, called “Librarians”), the ability to “HearMark” favorite moments of episodes and even financially tip any podcast you like and want to support (plus, podcasters earn money every time an episode is heard).

If you’re cheap and using everything: Castbox’s mission is “to connect people to information through listening whenever and wherever they want,” and they do it well. The free app offers personalized podcast recommendations via AI and clean design, but the selling point is accessibility: You can access Castbox available across not just iOS and Android but devices like Amazon Echo, Chromecast, Apple CarPlay, Android Auto and Apple Watch.

If you hate yourself: Keep using the Podcasts app on your iPhone. It’s become the iTunes of podcasting apps — something once decent and straight-forward that’s now buggy, hard-to-use and keeps somehow losing my shows (and search isn’t great, either). But it’s free, so … you get what you pay for.