How to Overcome Stress in Any Situation, As Told by UFC Fighters

Stress management tips from people who fight in a cage 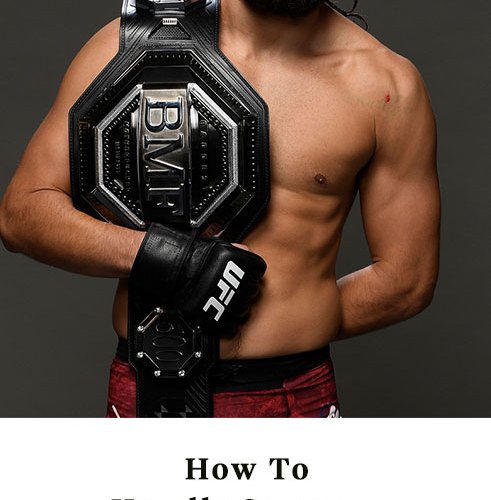 There’s nothing wrong with getting nervous every now and then. We’re all human.

But there are times when stress isn’t just an annoyance, it’s an incapacitating force that can ruin a work opportunity, romantic moment or even a personal relationship. We’re talking about biggest-day-of-your-life events, from a dream job interview to a marriage proposal to an investor pitch. And let’s be honest, picturing everyone naked just doesn’t work.

To help you navigate those overwhelming moments, we sought out people who experience some of the highest levels of stress imaginable: professional mixed martial artists. Their job, quite literally, is to be locked in a cage and fight until someone gives up, gets knocked out or time runs out. And it only gets worse for those who reach the top level of competition in the UFC: one wrong move can be the difference between a big pay day and the end of a career, or worse.

So we got in touch with three of the UFC’s best to find out how they keep their stress under control. If these tactics keep them calm and help them perform their best — in front of thousands of fans, inside a cage with blood smeared on the mat, facing off against a fellow gladiator — it’ll work for your next public speaking engagement.

Fastest knockout in UFC history, professional fighter since 2003
We caught up with Masvidal as he announced his partnership with Recuerdo Mezcal.

Put Yourself in Uncomfortable Situations

“I’ve been doing this 16 years pro. How many training camps I’ve had per year — that’s where you get a lot of your mental toughness,” Masvidal tells InsideHook. “That’s why I could run 30 miles right now if I wanted to. It wouldn’t be a problem. I could do a marathon without training, just because my mind has been there so many fucking times.” Instead of reading that as typical UFC bravado, what Masvidal is getting at is that while you don’t have the ability to lessen external forces, by putting yourself in strenuous, stressful circumstances over and over, the repetition and mental awareness you develop will help you through similarly trying ordeals in the future.

Include Stress in Your Preparations

Before giving a speech, you practice saying the words. Before meeting a client, you practice the pitch. But do you ever practice stress-relief techniques? You should start. When asked about Donald Cerrone, who recently lost to Conor McGregor in 40 seconds and detailed his battle with nerves before the fight, Masvidal said, “Him being nervous for every fight is probably what allowed him to not compete at his greatest. He was able to go to the gym every day, all day … but that was the one hurdle that maybe he didn’t master.” In essence, stress is an essential component of any challenge, and by not preparing for it — whether through breathing, meditation, etc. — you’re not preparing fully. “You can’t let the moment be bigger than you, you’ve got to control that moment.”

Five-fight win streak in the UFC arena, featherweight to watch in 2020

Use the Nervous Energy to Your Advantage

If the physical manifestation of stress feels like adrenaline — faster breath, racing pulse, dripping sweat — that’s because it is. Instead of trying to ignore it, Yusuff uses it to his advantage. “By the time it’s fight day, I’m looking to channel my excitement into energy so it’s more of me looking to not be too calm,” he says. If you find yourself unable to focus when stressed, it may be because you’re focused on suppressing your natural state. Next time, try harnessing it.

Visualize … in a Different Way

Forget picturing the audience naked, but the visualization strategy could work another way. “The best advice I could give to someone to give their best performance would be to gain confidence from your preparation and visualize the stage as another day at practice,” Yusuff says. You may not be able to control the variables in your intended audience — whether it’s a high-powered client or a rowdy crowd — but you can rehearse for your big day in a similar environment so that when the time comes, you bring that spatial, bodily comfort with you.

Youngest fighter in the UFC, finished his debut fight in December in Round 1

Go Through the Exact Motions Right Before

“When it comes to the warmup, I try to have a whole fight before I even go out, meaning that I have one of my corners throw on some MMA gloves and we fight situationally, so I’m able to get my bearings on what I’m actually going to try and do when I go out and work out all of the kinks on another person, rather than hitting pads or doing calisthenics,” says Hooper. By going through all the motions at the eleventh hour, you’ll feel more relaxed when showtime finally arrives, because your body and mind are retreading familiar ground. “I feel when I have done a good hard warmup, I feel more confident and I am able to be in more of a mental flow state.”

Don’t Count Down the Time. Try to Fill It.

“I try to think about the fact that I will be fighting for, at most, 15 minutes, which is such a short amount of time,” says Hooper. That’s a familiar tactic, but instead of treating it like a countdown — which could lower performance because your mind is focused on the time — he says to treat it like a space to fill. “I always try to think about how I want to make the most of that short time, and that I won’t regret what happens as long as I put my all into it …  I tell myself that once I start the walk out, there’s no turning back, and the inevitability of that brings me a weird calmness.”

We’re Thrilled to Report That Portland Is Weirder Than Ever

The 7 Best Pour Over Coffee Makers
The 5 Best Boutique Hotels for Fall Foliage Viewing
Meet Keng-Fu Lo, the Best Car Garage Designer on the Planet
10 Style Dos and Don’ts for Fall 2022
We’re Thrilled to Report That Portland Is Weirder Than Ever