How to Offer Condolences in a Pandemic

As thousands grieve in the wake of COVID-19, figuring out how to adequately support them has proven difficult

My good friend Patrick, a fellow writer/editor and former roommate (twice), unexpectedly lost his father to coronavirus in early April.

Patrick and his family, sheltering in Vermont, couldn’t be by his side. There was no public service. And his friends and family could seemingly do little in the face of stay-at-home orders and quarantining. Physical contact was out, and we weren’t even sure about sending food or cards.

“Right now, people are grieving a lot of things, from job loss to the loss of ‘normal’ life,” explains Dr. Brian Wind, who served as co-chair of the American Psychological Association’s Advisory Committee on Colleague Assistance, is an adjunct professor at Vanderbilt University and a clinical executive at JourneyPure. “When this grief is compounded with losing a loved one to COVID-19, getting support from friends and family is more important than ever. This isn’t like the death people are used to seeing; people are dying without family members by their side and funerals are being held virtually or not at all. It’s so important that you don’t minimize what a person is going through.”

Edie Weinstein is a licensed social worker and interfaith minister who performs memorial services. “I officiated a service recently, and there were nine of us, including the widow,” she says. “We all stood six feet apart and wore masks. The saddest aspect was that the widow had to go home alone with no one to provide physical comfort. Emotional support is the only substitute we have at the moment.”

Without the availability of the usual ways people help others cope with grief, Patrick himself offered up several avenues of suppoort: He set up a Facebook group that initially tracked his father’s health and then served as a memorial page. He wrote a touching remembrance on his personal blog and shared it, along with a lengthy newspaper obituary. And he stayed in constant contact with friends, via phone calls and Zoom.

He certainly did his part. I still wondered what I could do, however. So I spoke with him, as well as various etiquette experts, mental-health professionals and even a minister, about how to help your friends and family in a time of loss and pandemic.

Pick up the phone and give the person a call

“The easiest thing you can do right doesn’t occur to people,” says Daniel Post of the etiquette-forward Emily Post Institute. “Human connection is at a premium.” In lieu of calls, Post suggests a handwritten note that expresses your condolences and shares a personal memory or acknowledges how much that person meant. “Just be sincere and honest in what you write, and people will appreciate it.”

As Patrick told me later, a lot of unexpected people came out of woodwork to share personal stories about his father. “That took me back,” he says. “It was really nice.”

“People ask, how late is too late? That’s why I say send something now,” says Post. “Oftentimes we feel awkward and we’re not sure what the right thing is to do, and that awkwardness prevents us from doing something. Get over that. Most likely what you do will be taken very well.”

What you don’t say is important

“Listen with compassion and don’t feel pressure to reply with facts, figures or something informative,” says Angela Corbo, Ph.D., the Chair of Communication Studies & Associate Professor at Widener University. “We tend to value the facts in social conversations and say things such as ‘I hear the virus will be worse next winter,’ or ‘A lot of people have died.’ Try to avoid making statements based on news headlines.”

Lantern, a guidance platform for “navigating life before and after a death,” offers some simple tips when having a conversation with someone who’s grieving: it’s about them, not you. You’re not a counselor. And if you accidentally offend, apologize.

Sometimes you don’t need to say anything

“The most important message you give someone when you offer condolences for a lost loved one is ‘You are not alone,’” says Raffi Bilek, LCSW-C, therapist and director of the Baltimore Therapy Center. “That’s still a message you can send via Zoom. Just get on a video call and just be there. You may not need to say anything at all. Imagine the power of the message of solidarity you send by sitting with them in their grief and offering nothing but your presence.”

Food is still a good idea

It’s still fine to offer food as solace, says Michelle Pargman, a licensed mental-health counselor who lost a family member during the pandemic. “You can express support by sending a meal or a fruit basket,” she says. “Give those who are grieving a heads up, something like ‘Our family plans to have a meal delivered to you from ____, please let us know if you have any objections, and if not, please let us know what your favorites are for each family member.”

Offer whatever help you can

“Be specific with your help,” says Marie Gettel-Gilmartin, a professional communications coach. “Can you bring a meal or have one delivered? Can you help with some kind of memorial to honor the deceased? When my uncle died earlier this year, I helped my cousin by composing a slideshow of photos to show at his service. This type of offering would be even more valuable now in lieu of physical gatherings.”

And that help can come from any situation, even when it’s not asked for. “My mom told this guy who lives near her that she couldn’t find yeast at Whole Foods,” Patrick says. “The next day he just showed up with a six-pack of yeast. It’s all about listening to what someone needs and then go do it.”

Stay in touch after the first month

After an initial outpouring of condolences, letters, calls and Zooms, communication between Patrick and his friends and family wound down after a month, even though there’s certainly no closure. “When someone dies, family and friends are often overwhelmed by support right after the death,” says Gettel-Gilmartin. “But that usually slows to a trickle. The best thing you can do is to continue to provide support, even if that’s just a card or an email on the anniversary of the loved one’s death, their birthday or other important dates.”

Allow the people grieving to guide you

“Sometimes it’s easier to figure out the right way to show support simply by following the lead of the person who has experienced the loss,” says Andrea Sherr, a life coach at Insparrow.com. “One of my friends posted the loss of her father on Facebook, giving the green light for people to express condolences in the comment section.”

Don’t be worried if you don’t hear back

Having a Facebook page for his father ended up being a huge help to Patrick. “When this first happened, that page could keep everyone in the loop so we weren’t always repeating the same story,” he says. “That’s mentally exhausting. We had so many emails and cards! All the messages of goodwill were important, but people need to understand you might not get replied to immediately.”

A final important lesson: There was eventually a small ceremony for Patrick’s father at his church, conducted on Zoom. As my friend remembers: “The priest said, ‘Everyone grieves differently, and there’s no right way to do it. It’s something we have to remember going forward, not just for ourselves, but others as well.’” 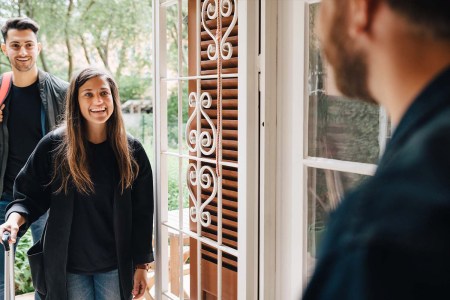 How Long Can You Stay at Someone’s House Before They Start to Hate You?