New York’s 9 Best Bike Rides, According to the Pros

Can you handle the 100-mile Scary Poodle? 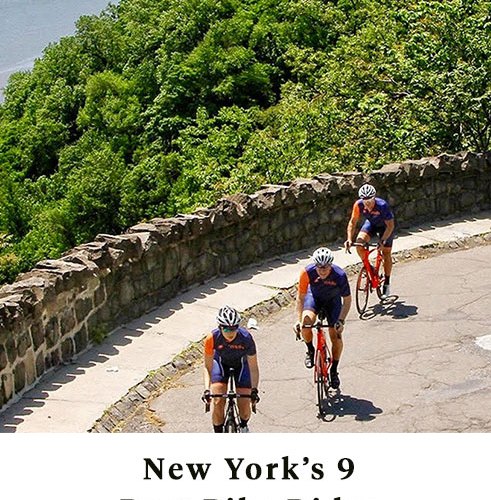 Get out of the city. Get close to nature. Get less chubby.

There are plenty of good reasons to dust off the sad, deflated bicycle you’ve been using as a towel rack since Obama’s first term.

But none are better than the promise of New York’s nine best bike rides, as told to us by locals who work in the industry.

From the six-mile Central Park course you forgot to a 100-miler called “the Scary Poodle,” we’ve got something for novices and experts alike.

What they’re all about: Founded in 2011, Brooklyn Bicycle Co. designs multi-purpose bikes named after the streets of Brooklyn.
The route: A sunrise ride from Grand Army Plaza at the north end of Prospect Park out to Fort Tilden in the Rockaways. Take Bedford Avenue through some of Brooklyn’s most diverse and underappreciated neighborhoods. You’ll pass by Brooklyn College and end up in Sheepshead Bay just as the charter fishing boats are queuing up for their morning departures. From there, you’ll hop onto the greenway for some tremendous lane-protected riding. As amazing as the ride is, the reward of this 27-mile out-and-back is having an entire beach all to yourself: nothing tops a 6:30 A.M. ocean refresher. If you’ve got a few extra minutes to spare on the return trip, make a diversion to Floyd Bennett Field, New York City’s first municipal airport.
The bike: The Roebling Hybrid Bike is made for rides like this. You’ll appreciate the puncture-resistant tires and wide gearing range as you roll through some of NYC’s oldest neighborhoods.

What they’re all about: Roula is a high-end bike-concierge platform on the West Side Bike Path, with advance booking and bike delivery to your hotel or office.
The route: A 6.2 mile loop in Central Park is perfect for all levels. On any given day you will see tourists on cruisers, commuters on citi bikes, and more serious and competitive cyclists and triathletes on road bikes. When done riding, some cyclists enjoy sitting outside at the relatively new LPQ to enjoy a coffee and pastry with a view of Sheep’s Meadow.
The alternate: Alpine River Road, About 35 miles round-trip from NYC, is a cruise through rolling hills for a more intermediate cyclist with a road bike. It’s a local favorite because there’s little traffic and great scenic views of Manhattan along the Hudson River.

What they’re all about: An NYC-based brand focusing on low-maintenance, belt-driven bicycles for everyday riders.
The route: TriBeCa to Central Park is great for getting the diversity of views that NYC has to offer. When we were developing our new all-road model, we would ride the prototypes around the city to test it, and we found this great ride. Start outside of our showroom, ride over TriBeCa’s historic cobblestones straight out to the West Side Highway and continue north five miles along the water, where you’ll pass by parks, piers, waterfront bars and restaurants, and the famous aircraft carrier Intrepid Museum. When you cut back into the city, you get a quick taste of riding alongside traffic until you enter the park at 60th. You can then ride from road to dirt by taking the bridal path clockwise around the park to the reservoir in the middle. Good for an intermediate rider.
The bike: Priority’s new all-road model, The 600, is inspired by and perfect for this ride.

What they’re all about: Plucky startup Princeton CarbonWorks was launched by four former US National Team rowers. They set out to “develop the most groundbreaking cycling wheels imaginable.” Then they used aerospace engineering and advanced material science to prove it. Once you try these wheels, you will never go back.
The route: Get ready for 100 miles on the Princeton Century, aka “The Scary Poodle.” It’s a hard one, with 7,000 feet of climbing and 30 miles of gravel in store. But it’s also worth it. Enjoy the miles north of Sourland Mountain before Lambertville: not only are they the best of New Jersey, but they are some of the best you’ll ride in the United States. Upper Creek Rd. and Stumpf Tavern Rd. are both particularly breathtaking; you’d never guess you were in the most densely populated state in America. Snag a pre-ride coffee at Small World Coffee. Lunch will be taken at the Lambertville Trading Company. And treat yo’self to a post-ride ice cream at the phenomenal Bent Spoon.
Recommended bike:  A road/gravel/CX with at least 28mm tires.

Jimmy Phillips
Founder of The Domestique

What they’re all about: The Domestique is a boutique cycling concierge company based in New York. He’ll show up at your door — or The Gansevoort hotel, where his bikes are racked — with a Specialized Tarmac loaded up with water bottles and snacks.
The route: The Strava File-Nyack Ride is 60 miles of intermediate-to-advanced wonder. You’re cycling across the George Washington Bridge, River Road and through Piermont, stopping at Boxer Donut for great coffee and donuts along the way.
Recommended bike: A road bike, all-road bike or TT bike will do you just fine.

What they’re all about: Catskills Collective is an upstate guide company operating out of a renovated 1900s farmhouse. Their trips include round-trip transportation from NYC, prepared food, two nights accommodation, two guided rides and yoga or a massage.
The route: You’re signing up for 60 miles and 5,200 ft of elevation for this adventure here. It’s best to have some experience under the belt. The ride offers equal amounts of ascending and descending, as the tight turns and rollers through Woodstock open up to the longer climb of Kaaterskill. The six-mile climb is surrounded by a series of waterfalls, and at the top you’ll find Twin Peaks Café, where they serve a bacon, egg and cheese between made-to-order donuts. The ride ends with a final descend into Phoenicia, where the newly opened Woodstock Brewery has a constant rotating selection.

What they’re all about: Rapha was established in 2004 to address a need for stylish, high-performance cycling clothing. Alongside this, Rapha has cultivated a global community of cyclists with the Rapha Cycling Club (RCC), the largest club of its kind.
The route: This is a great alternative route out of NYC, through parts less frequently explored for most NYC cyclists. For the intermediate to advanced rider, it’s 61.68 miles and 3,404 feet of elevation. Stop at Caffelatte in Dobbs Ferry for an authentic espresso, then end the ride at Peekskill Brewery before hopping on the train back to NYC.
Recommended bike: Make sure to saddle into an all-road bike. About half the route is gravel.

What they’re all about: Critical Cycles is from L.A., but offers its collection of approachably priced cruisers and seven-speeds in cycle shops across Manhattan and Brooklyn.
The route: This 7.2-mile roundtrip isn’t built  for your neon skinsuit, guzzled egg whites, wakes-up-at-5 A.M. type of rider. But Critical’s unflappably breezy two-wheelers are perfect for a brief zip along a cheery thoroughfare in Montauk. Book a room for a couple nights at The Crow’s Nest (weekday if you can), and set out for Montauk Point Light, a lighthouse at the very edge of Long Island, commissioned more than a few years ago by President George Washington. The ride back could get a bit windy, but it’s an ocean breeze … everyone knows that’s the good kind. Besides, you’ve got nowhere to be.
Recommended bike: The Chatham Beach Cruiser. Ocean views always look better between some wide-set handles.

What Draws So Many Boomers to America's Largest Retirement Community?

Is the "Au Naturel" Approach to Body Hair Making a Comeback?

Why You Should Never Lift Weights in Running Shoes

What Draws So Many Boomers to America's Largest Retirement Community?
Is the "Au Naturel" Approach to Body Hair Making a Comeback?
Why You Should Never Lift Weights in Running Shoes
How America’s First Film With Nudity Ended Up Banned in DC
The 2021 Uni Watch NHL Season Preview
How Many Minutes Per Day Should You Spend Outside During Winter?