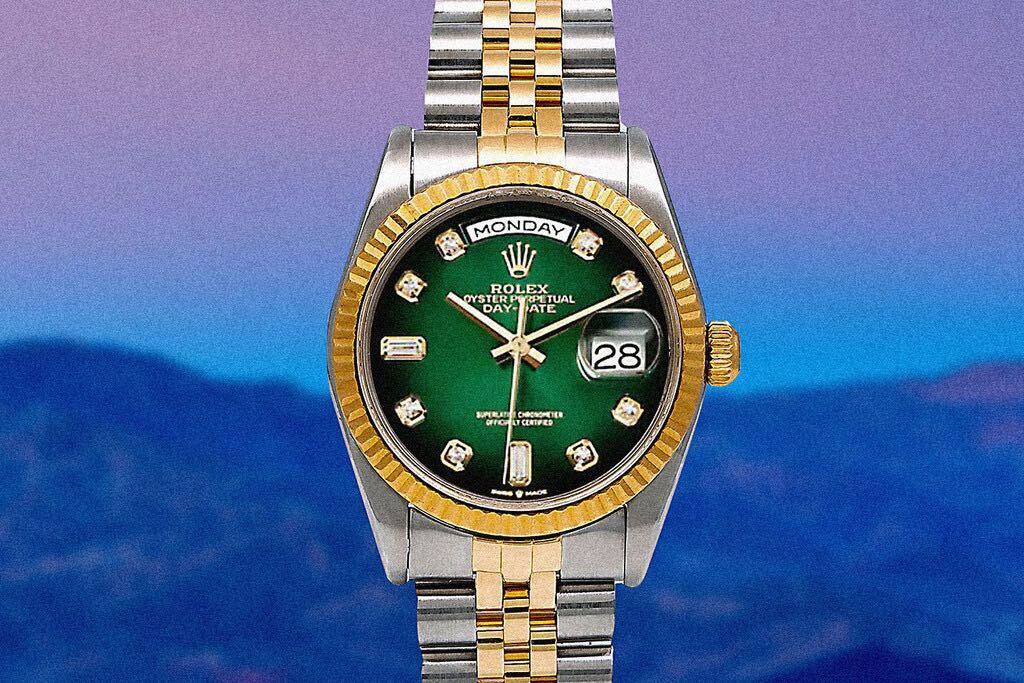 You're looking at the watch that helped birth an entire new-money ethos
Jomashop/Getty
By Simon Van Booy / May 27, 2020 9:55 am

Anyone who clips on a Rolex Day-Date every morning probably has a story to tell —especially if they’ve been wearing it since the 1980s, when it stood for something greater than the sum of its (gold or platinum) parts. Released in 1956, 11 years after the Datejust, the Day-Date perhaps unintentionally rose to fame in the late ‘70s and early ‘80s as a symbol for power, status, money and prestige. Worn by powerful men from President Lyndon Johnson to Tony Soprano, the Day-Date refused to discriminate between old money and new, and helped lay the bedrock for what soon became known as “yuppie” culture (the term being a mashup of Young Urban Professional and the then current word “hippie”).

South Florida collector Karl received his first Rolex Day-Date as a gift from a girlfriend who happened to be a jeweler. His collection soon grew when, in classic ‘80s fashion, he closed a big deal and decided to spend 10 percent of his profits on “pure foolishness.” Soon, his collection included not only Rolex pieces, but anything he found interesting, from Seiko to Hamilton — even a few tank watches. But when his 30-plus piece collection was stolen in the ‘90s, he gave up and wore Swatch watches for 20 years.

When the collecting bug bit for a second time, Karl decided to focus on the Day-Date, primarily because the countless variations of this single model made collecting infinitely more interesting. For Karl, the enormously popular Datejust is like a junior member of the firm, whereas the Day-Date has been, and always will be, the boss. Nowadays, a new Day-Date starts at around $35,000, but Karl prefers to collect models from the ‘80s and ‘90s, which mostly range from $8,000 to $12,000, depending on condition and the rarity of its features. He currently has 17 Day-Dates in his collection, and enjoys the variety of dials, markers and hands that were available 40 years ago but can’t be found on current models.

“The ‘80s was the bling era,” he explains. “And the Day-Date was the bling watch of the decade, since Rolex only sold it in precious metals. Back then, there were also pages of options. You could get dials in walnut, birch, mahogany or lacquer ‘Stella’ dials in flamingo pink or taxi yellow — even stone dials. Despite the seemingly unlimited choices, it was the ’80s — people wanted more. Yuppie culture grew out of a time when excess was encouraged. People would buy a gold or platinum Day-Date, then have it customized into a nugget watch, sometimes putting diamonds all over it. If you were a Wall Street guy, you were expected to show off that you were a master of the universe at 24.”

Jacek Kozubek is an authority in the world of vintage Rolex watches through his retail website, tropicalwatch.com. He believes that gold Rolex watches have always been a power move. “Even more so in the ’80s and ’90s,” he explains, “when owning gold stuff was a bigger deal because gold had more of a monetary value.”

Jacek agrees the most popular of the gold models in the ’80s was always the Day-Date, nicknamed “The President” on account of the bracelet. “That model was the pinnacle dress watch Rolex made,” he tells us.

While some people might attribute the success of Rolex in the 1980s to clever advertising campaigns, Jacek believes people wore Rolex watches because “they were great and worked. I think by designing a great product it became a fashion icon — not a fashion icon because of some ads.”

In the 1970s, the so-called “quartz crisis” threatened to make automatic watches seem obsolete. This is when Jacek believes Rolex took center stage. By being pushed out of the tool-market category on account of how quartz watches kept better time and were less expensive, Rolex went from being practical objects to objects of desire.

“The ’80s is also when things became ultra disposable,” he says. “I have met many customers that stopped wearing these watches only because their quartz counterpart was more pragmatic. So brands like Rolex went upscale in order to preserve the craft.”

Rolex Day-Date aficionado Karl was gifted his first Day-Date in the early ’80s, when he was in his twenties. “I felt too young to wear it, I was embarrassed. It was a big flashy Rolex, and made me look like a trust fund baby or a drug dealer. Though I did wear it to large firms where they might try to intimidate me. Now guys wear it with jeans or shorts and they’re right, we were wrong — there are no rules. The Day-Date is still viewed as a sign of success, but they’re not as popular as the Daytonas or Submariners. But back in the ’80s, no one cared about the steel professional models. Most collectors then wanted Bubblebacks.”

Karl believes that in the future, Rolex OysterQuartz models might become collectible. Rolex stopped making quartz watches in 2001, but a Day-Date from the ‘80s can be bought at a reputable dealer for under $10,000, while an ’80s OysterQuartz Datejust can be had for well under $5,000.

Karl’s current favorite from his collection is a Day-Date with a Tiger-Eye (chatoyant gemstone) dial and the traditional President bracelet. “I’m single, I’m 62, I live in South Florida — if I can’t wear a bling watch, who can?”

Sony's Best Noise-Canceling Earbuds Are Both on Sale

Do you pass the vibe check?