Brits have swagger. Here’s how to steal some of it.

True for rock ‘n’ roll. True for Bruce Wayne (or anyone with a butler). And — should you heed the advice herein — true for you.

To wit: The London Touch, our guide to anglo-fying your life this fall, made in partnership with the ace blokes at Jo Malone London.

Inside, we talk to them about taking our scent game to the next level. To London lad Duncan Quinn about achieving a bit of rakish sartorial swagger. And to famed UK toque Jason Atherton about how the new British culinary guard takes on autumn.

So read on. And try not to cock it up, yeah?

There are fellas who have, for lack of a better term, what we like to call Varsity Scent Game. The ones whose homes and persons seem to elicit an endless stream of olfactory compliments from acquaintances and random passersby alike.

Among these men, the name Jo Malone London is gospel. It’s a house of scent where a man goes to make his aromatic signature exactly that — a signature.

We met with the storied British scentmaker to celebrate the launch of their new scent, Basil & Neroli, a fresh, sophisticated alchemy of herbaceous warmth, bitter orange blossom and white musk — perfect for our transition from the balmy days of summer into the cooler months.

And during our chat at their New York flagship in Manhattan’s Greenwich Village, they taught us a couple things about becoming one of those fellas we were talking about a moment ago. 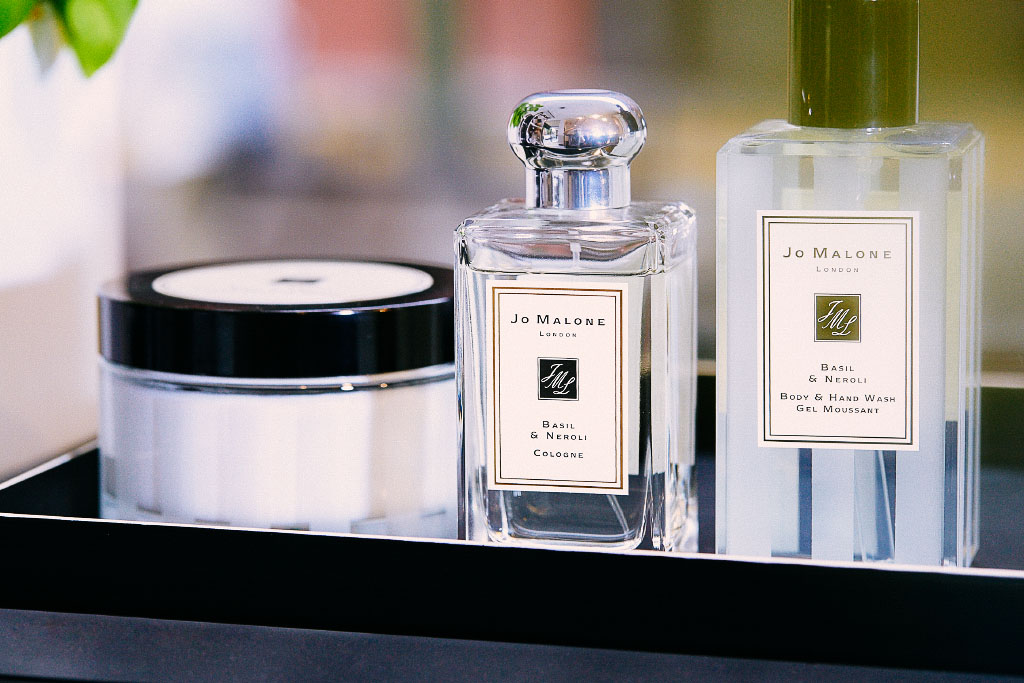 Fragrance Combining Is a Thing

You can (and should) wear more than one cologne simultaneously. Think of it as scent layering: a mix of fragrances that work well for you and evolve — the way your favorite records do — over the course of the day. Best part: theres no rules – it’s all about experimentation. And Jo Malone London offers both sample kits and expert consultations to help you determine what mix of citrus/floral/spicy/woody should be your olfactory John Hancock.

Let Someone Pamper Your Hands

Step one: find a Jo Malone London boutique near you. Step two: go in and ask for their complimentary hand and arm massage. Step three: sit back and relax while a friendly professional uses fragrant lotions to massage tension out of your hands and forearms that you didn’t even know was there. Step four: leave feeling and smelling strangely terrific. 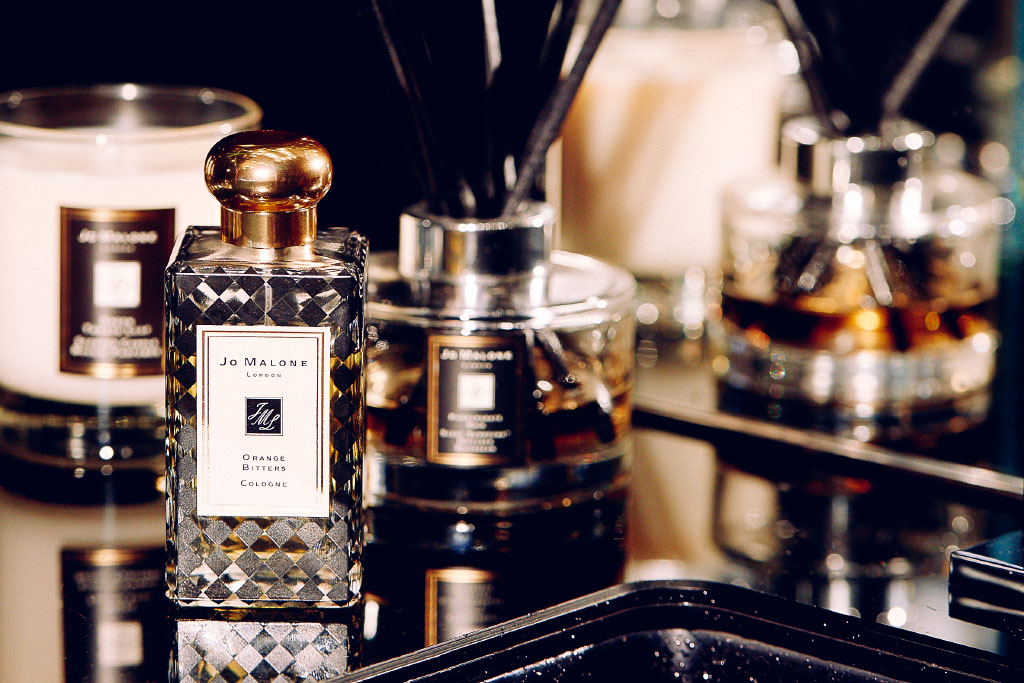 It All Starts in the Shower

A truly savvy chap also knows that a complimentary body wash and/or lotion adds impact and nuance to his aroma. Basil & Neroli body wash: meet Wood Sage & Sea Salt cologne. You: meet pretty girl leaning closer on the subway. Not to mention Jo Malone London’s other grooming gear, all of which is perfect for the cold weather onslaught: from a body exfoliator that’s got some proper grit to Vitamin E treatments that’ll keep Old Man Winter from wreaking havoc on your mug.

Your Apartment Could Use Some Cologne, Too

Spoiler alert: it’s absurdly simple — like, why-aren’t-we-all-doing-this-oh-right-we’re-men-we-don’t-think-about-this-stuff simple — to have a home that smells awesome but also masculine. First, grab a home candle (Incense and Embers was your correspondent’s favorite). Then light it. Pyrophobic? One of Jo Malone London’s diffusers might be even easier than the candle and also looks tres handsome on your bookshelf.

Every gent worth his salt has a good tailor.  More important than the suit is the man who fits it, as they say.

According to London-born NYC clothier Duncan Quinn, “Once you find a good tailor, you must never give his name away even under the threat of bodily harm. Except to your best friends and dearest enemies.”

So we’ll have to be forgiven for spreading the word when it comes to the man himself — as not only is he the wiliest of experts in achieving the sort of rakish charm you’d find in UK fashion mags and Guy Ritchie movies, but you may also find his wealth of advice and counsel extends beyond the fiber of your fabric. To fine wine, fast cars … yachts, even.

But that’s a story he’ll have to tell you himself at his NYC atelier, which may or may not feature secret passageways hidden behind massive cabinets of top-shelf hooch.

For now, content yourself with some top tips from the man himself on adding some London swagger to your vestiary arsenal this season: 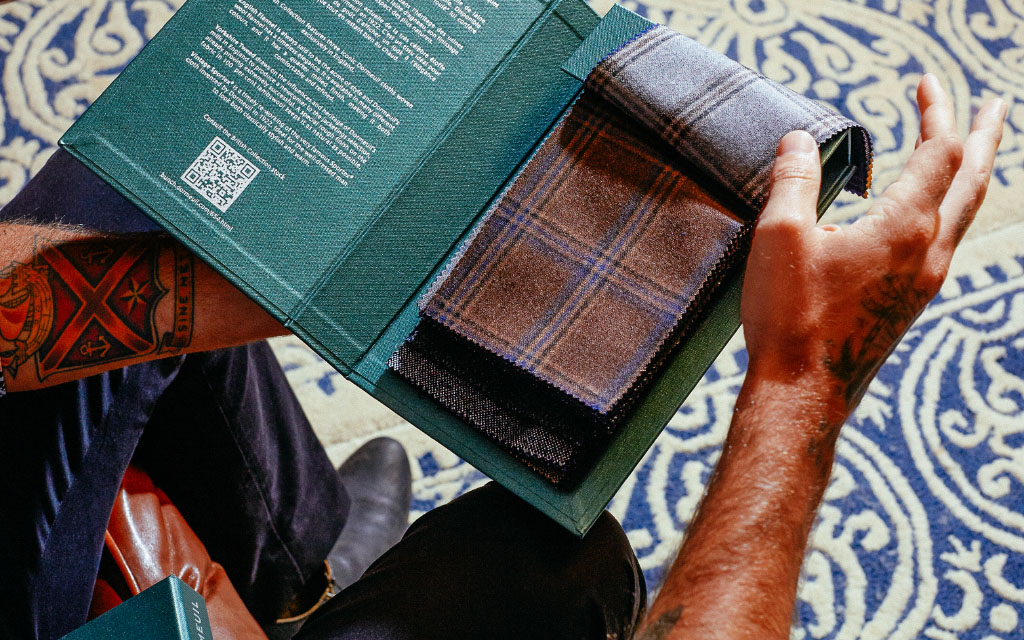 Stop With the Whole Three-Season Rubbish

“That’s for amateurs and department stores. You will look far, far better in something with a little more heft. It will drape better. It will last longer. You can have glorious evenings of debauchery in it and spill all manner of things on it and it will survive. Go for something in the 12-oz. to 13-oz. range if you really want that city Brit look. For the really good stuff, look to Dormeuil for cloth. They started making it in 1842, and despite being French they have always made it in England.  Where the best cloth comes from. Of course.”

Add Some Punch, But Be Judicious

“Stripes are optional. As is flannel. But if you can find it, add a little color either in the stripe, check, lining or detail.  But be careful with that — metrosexual man is dead, and you also don’t want to look like Coco the Clown. So seek sage advice and counsel before you end up messing up that classic dark blue jacket with red stitching everywhere.”

Get Your Tweed Game Up

“Yes your mate can brag about how he got his 100% cashmere Loro Piana overcoat at a 90% discount last season for a pittance even though it’s worth bazillions. But who cares. And if it really was worth that why the f*ck would they sell it for nothing? Anyway. Tweed. Get some.  The proper stuff. Not the namby pamby cashmere impressions. Go for 16-oz. to 21-oz. and you’ll be set for two things: -20 in New York City with just a scarf, gloves and a good pair of boots, and also that shooting invitation from Holland & Holland you’ve been angling for. Once you have the tweed, give Guy over there a call and tell him Duncan sent you.” 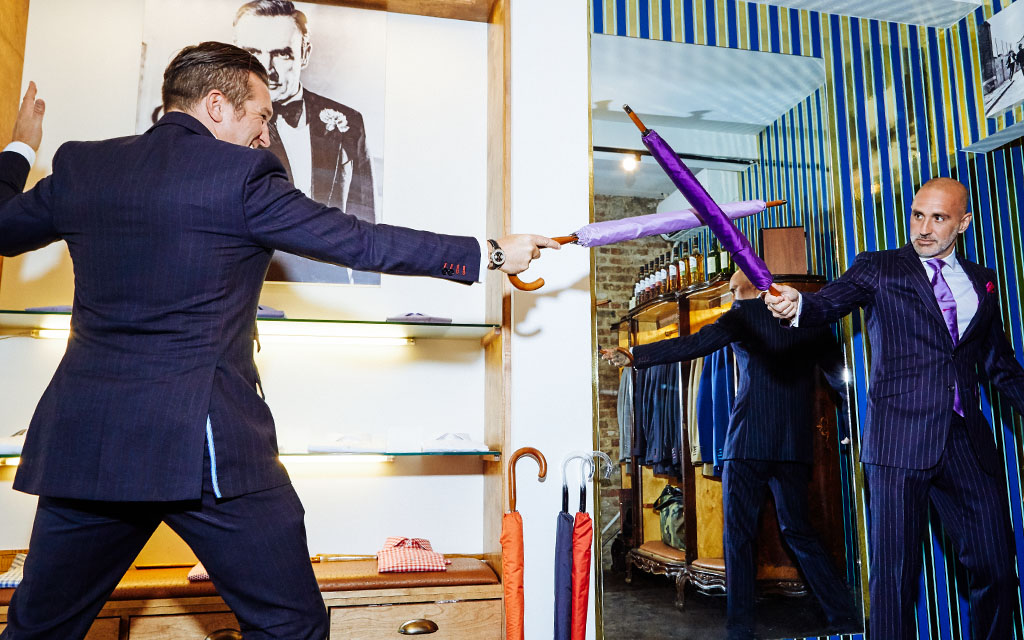 Get Thee a Brolly (That’s Brit speak for umbrella)

“A proper one is often what separates the men from the boys. There’s nothing worse than a fine outfit devalued by a $10 umbrella. No excuses. And if you know the right man you can color-coordinate with your outfit. Of course, it has to have the structural integrity of a Sherman tank along with the lines and looks of Elle MacPherson. Brigg make some fine ones. As do we. And if you really know the right man, of course, for a fee you can be well prepared for that duel at dawn when the young lady’s more regular squeeze comes home half an hour early.” (Ed. note: Neither InsideHook nor Mr. Quinn endorse infidelity and/or umbrella-sparring. We do appreciate a bit of cheeky British banter, though.)

Considering he cut his culinary teeth under the watchful eye of legends like Gordon Ramsay and el Bulli’s Ferran Adria, it’s not surprising that Jason Atherton garnered himself a Michelin star within the first six months of opening his flagship Mayfair restaurant Pollen Street Social back in 2011. Now the all-star chef boasts six celebrated restaurants in his native London, as well as a slew of other award-winning eateries scattered across the globe.

Including — stateside residents will be happy to hear — one in New York City, where his recently opened Clocktower has earned rave reviews and proven to be one of the tougher tables in a city of tough tables. No wonder when he’s plating up this sort of artfully hale cuisine and they’ve got a stately billiard room to boot.

Herewith, some tips from Chef on injecting a little bit of Brit influence into your own kitchen this fall. 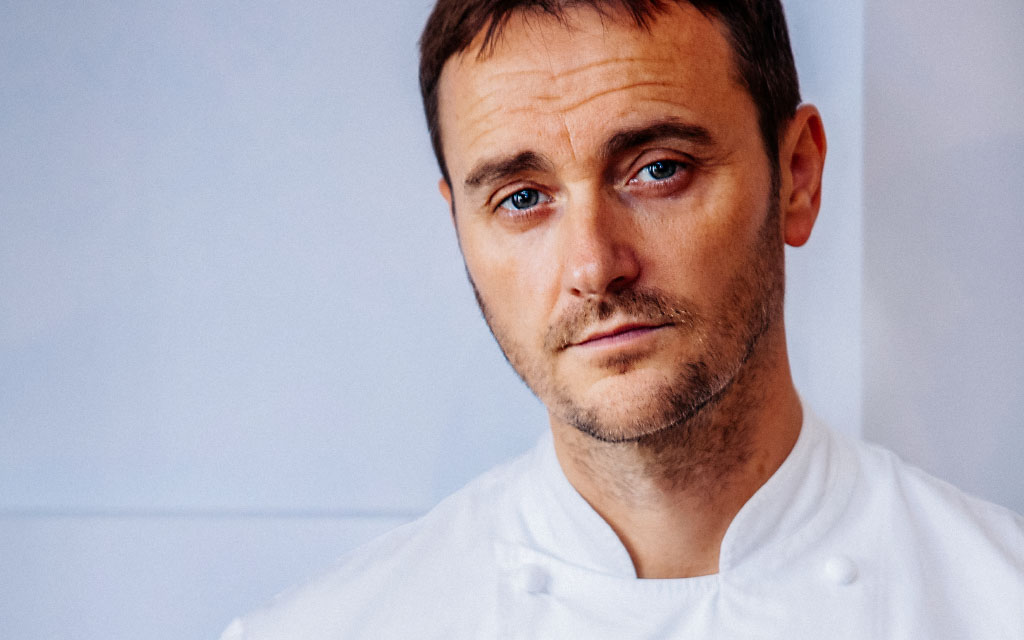 Bone Up on Your History

“To really achieve British culinary greatness in the kitchen, you need to go back to our roots — pick up Elizabeth David’s first cookbook and cook your way through it. She completely revitalised British cuisine and her writing and recipes are fantastic.” 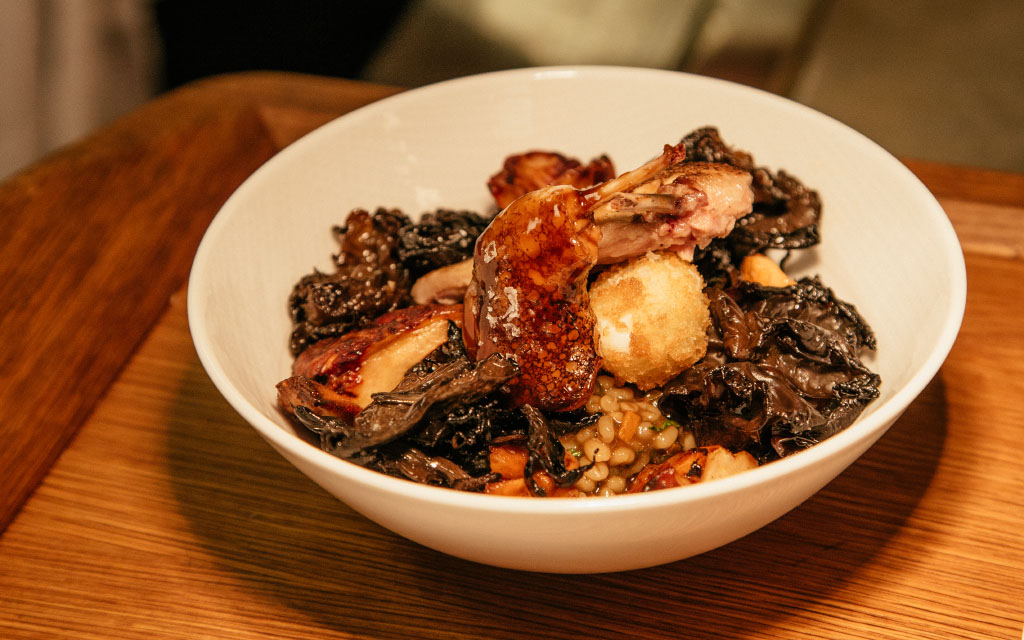 “Now is the time to pick up some fantastic British partridge, pheasant and grouse. Wrap the bird in bacon before you roast it, and serve it with a bread sauce (homemade is the best; use sourdough breadcrumbs) and game chips. Finish with gravy — make sure to put a bit of fruit in it, such as red currants.”

When in Doubt, Mash It Up

“To really cook like a Brit, you need to learn how to do a good mash. Boil your potatoes in their skins, peel them and then weigh them. Add the equivalent weight in butter (yes really), season with sea salt and mash them with a little bit of milk. Delicious.”

If All Else Fails, Cheat Off the Smart Kid

The most foolproof way to cook like Jason is probably to take your instruction from the man himself: Chef was also kind enough to provide a favorite roast duck breast recipe from his book Social Suppers. “This is a lovely autumnal dish featuring a mixture of humble but delicious root vegetables,” he says, “all of which have a nutty, earthy sweetness that goes beautifully with the duck breasts.”