The 2020 California Michelin Guide Is Still On, Despite Pandemic

Will the dining guide be outdated before it even comes out?

Restaurants are in a bad place, but that isn't stopping the Michelin Guide.
Jametlene Reskp on Unsplash
By Bonnie Stiernberg @aahrealbonsters

As you’re surely aware, restaurants have looked a little different since the coronavirus quarantine first began back in March. Many are still closed to indoor dining, scraping by on just takeout and delivery orders, while others are operating at limited capacity with extra safety measures in place. It’s better than nothing, of course, but it’s a far cry from business as usual.

That hasn’t stopped the Michelin Guide from releasing its 2020 California edition, apparently. As Eater reports, the dining guide will be released sometime later this year, based on information gathered before the pandemic hit in March.

According to the San Francisco Chronicle, “Inspectors who review the restaurants completed their fieldwork for the 2020 California edition before the pandemic began. That means ratings in the influential guide, which is known to give businesses huge bumps in sales, will be based on dining experiences that have not been available since March.”

As you might expect, the decision to release the guide based on outdated dining experiences is controversial — as is another Eater report that Michelin inspectors in New York are quietly making their rounds despite the city’s current indoor dining ban.

Chefs/owners Max and Eli Sussman of Samesa responded to the article in their Instagram stories, writing, “Peak inequality is Michelin inspectors eating a $700 meal during a global pandemic surrounded by plexiglass dividers while folks protest 10 ft away while some masked server dripping in sweat in a goddamn bowtie who’s about to get evicted from their shoebox apt and is being grossly underpaid by some unnamed gastronomic shrine to 1980s Wall Street extravagance tries to give impeccable 3 star service so that a tire guide can give a rating with zero transparency so netjet tourists can be ‘in the know.’” 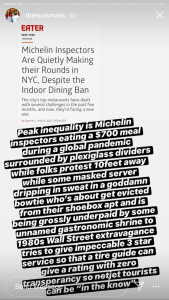 10 Great (Non-Pumpkin) Beers for Fall
Products of the Week: Colorful Sweatsuits, Ice Pink YETIs and a New GoPro
Concerned About Air Quality? Wildfire Expert Tom Scott Has Some Advice.
Whatever Camping Gear You're Missing, It's Probably on Sale at Backcountry
Yohance Joseph Lacour Is the Sneaker World's Greatest Redemption Story
Five Day-Window Watches You Should Consider Now That Time Is Nebulous