Five great spots for an iconic DC vista, and where to grab a drink nearby

We can't get you this photo. But we'll get you something similar.
Dennis Govoni
By Austa Somvichian-Clausen @austaclausen 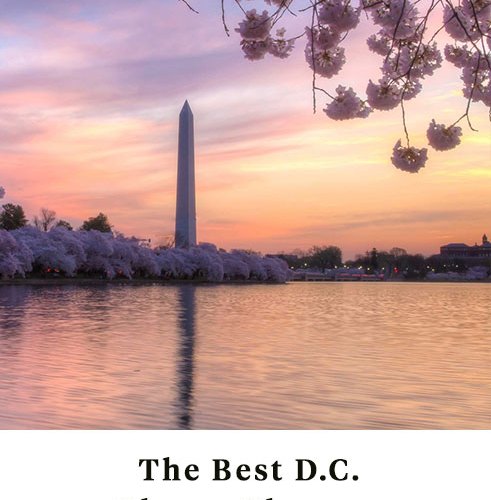 A short-lived but magnificent omen that spring has finally arrived in the District, the typical peak bloom date usually arrives sometime during the last week of March and the first week of April. This year, the official annual festival takes place from March 20-April 12, attracting people from near and far to see the nearly 4,000 cherry trees that line the Tidal Basin, National Mall and Potomac Waterfront.

The only problem? Well, all those people we just mentioned. There will be more than 1.5 million of them, and that means packed streets and more unintentional selfie bombing than one can reasonably stand.

Nonetheless, cherry-blossom gazing is a DC rite of passage and also ideal spring-date fodder, so we pulled together a list of lesser-known but equally ripe photo opportunities. We also paired them with a place to grab a beverage nearby, just in case all that chinstroking makes you thirsty. Happy hunting.

The Photo Opp: The National Arboretum

Around the famed Tidal Basin, you’ll find no shortage of Yoshino cherry blossoms, the most famous and numerous variety in DC. While the Yoshinos are obviously beautiful, the National Arboretum is the best spot if you’re looking for something a little different.

The vast 446-acre garden and research institution has the most diverse selection of cherry trees in the region, with more than 70 varieties, some even created by the scientists who work at the arboretum. Because of this variety, the arboretum also tends to have a longer blossom season than other local spots, with more early and late bloomers.

The After-Drinks: Supreme Core Cider
Supreme Core Cider’s taproom is right by the residential entrance to the arboretum, making it the perfect place to stop in for a leisurely pint or flight post-blossoms. Their Cherry Bloom cider also relaunches this Saturday just in time for the festival — a lightly carbonated, refreshing blend of sour and dark-sweet cherries with a champagne yeast re-fermentation.

Don’t expect to find many tourists, if any, at this grassy local park that’s nestled amongst historic row houses in Capitol Hill. Though Stanton Park is named for President Lincoln’s secretary of War Nathanael Greene, the statue in its center honors Revolutionary War hero Nathanael Greene. Grab some picnic ingredients from nearby Eastern Market and settle in for a leisurely afternoon, or simply walk the perimeter of the park, where the cherry blossoms are planted.

The After-Drinks: Little Pearl
Opt to drink al fresco at Little Pearl, a charming cafe-by-day and wine bar and restaurant at night. It’s grassy, spacious outdoor patio is the perfect spot to grab a glass of rosé and an espresso laden pick-me-up.

This normally scenic historic estate is made even grander each spring by the cherry blossom trees that line the pathways of its 10 acres of gardens. While the entire estate is a beautiful place to walk around, we suggest checking out a spot called Cherry Hill, a slope that’s tucked away into a normally unassuming corner but turns into a pastel forest during peak bloom. Make an afternoon out of it by bringing a picnic blanket and just enjoying the sights and the (hopefully) warm weather.

The Photo Opp: The Basilica of the National Shrine of the Immaculate Conception

The Basilica, which is technically the largest Roman Catholic Church in North America and the 10th largest in the world, is actually hiding in DC’s Brookland neighborhood. If that’s not enough reason to give it a visit, maybe the more than 150 cherry blossom trees on-site and free admission will help. Located well away from the National Mall, it draws much smaller crowds, meaning you might actually be able to get a few iconic cherry blossom shots devoid of randos in the background.

The After-Drinks: Right Proper Brewing
This local brewing company has two locations in the city, but their Brookland production house includes a tasting room that offers a view of the brewery in a cozy space filled with reclaimed cherry wood and what they call “a slightly disturbing chalk art mural.” Try their Dead Key brew, a dark saison fermented in a French oak foeder and aged on top of 500 lbs. of plums, giving the beer notes of cherry and black currants.

This Bethesda enclave has the largest concentration of cherry trees in the area, with more than 1,200. We suggest taking the Red Line to Bethesda Station and going for a nice afternoon stroll, taking time to notice the blossom-heavy branches lining the streets of Kennedy Drive, Dorset Avenue and others. Ambitious bikers can hop onto the Capital Crescent Trail from Georgetown and roll into the neighborhood for an even more scenic journey.

The After-Drinks: Kims’ Yirasai
Stop by local favorite Kim’s Yirisai in neighboring Westwood for Japanese fare like sushi, teriyaki, udon and yakisoba to pay homage to the birthplace of the cherry trees.