And, more than 80 years after the model was first created, Bugatti might be bringing it back.

Renderings of the four Bugatti Type 57SC Atlantics that were produced. (Bugatti)
By Evan Bleier @itishowitis

Eight decades ago, Bugatti built a quartet of Bugatti Type 57SC Atlantics, only three of which continue to make beautiful music today.

The fourth, No. 57453, would be as well had it not gone missing following the death of its original owner, Jean Bugatti. 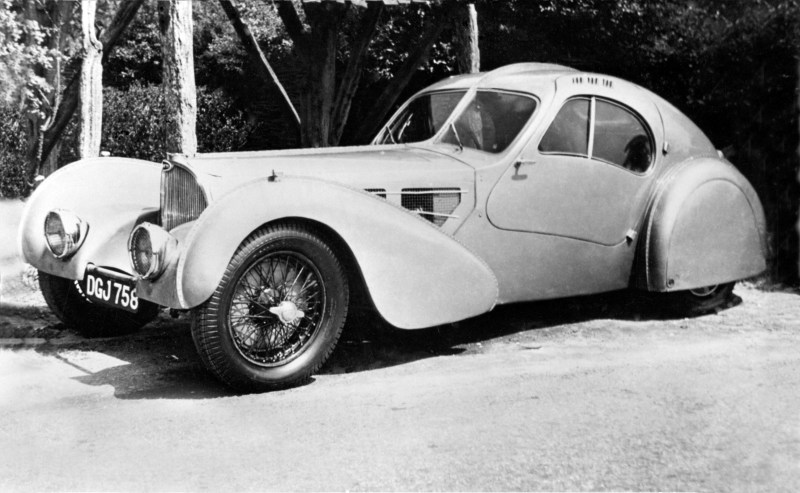 The first of four Bugatti Type 57SC Atlantics that were ever produced, the “Rothschild Atlantic.”(Bugatti)

Distinguishable thanks to its extremely long hood, the 12-foot-long Atlantic coupé was developed from a unique prototype which was known as the Coupé Special and Coupé Aero.

With a riveted aluminum seam running over the roof as another signature design feature, the trio of remaining Type 57SC Atlantics have shown well at events like the Pebble Beach Concours d’Elegance in California

“The breathtaking proportions of this masterpiece were simply unparalleled at the time and are still thrilling to the present day with their fascinating elegance,” said Bugatti design director Achim Anscheidt.

A black-and-white image of a Bugatti Type 57SC Atlantic. (Bugatti)

Known as the “Holzschuh Atlantic,” chassis No. 57473 was sold to Parisian businessman Jacques Holzschuh when it first left Bugatti’s factory.

After Holzschuh sold the car to a car collector, the second owner died in an accident and the Bugatti was completely destroyed. Years later, it underwent a complex restoration, although the original engine – which was capable of hitting 124 miles per hours – could not be saved. 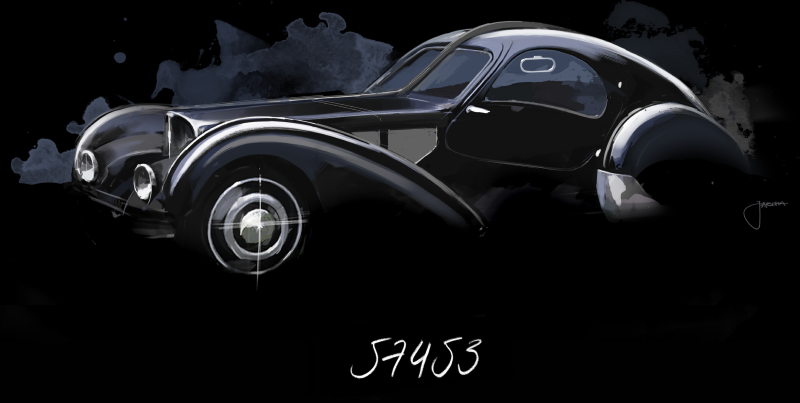 Chassis no. 57591 was built for British barrister and tennis star Richard Pope. Delivered in May 1938, the car was returned a year later so it could be fitted with a supercharger.

Sold to Ralph Lauren in 1988, the coupe was restored to its factory-delivered appearance and went on to take top honors at Pebble Beach in 1990 and again at Villa d’Este in 2013.

Delivered to Victor Rothschild in 1936, chassis No. 57374 was driven around in its original condition until it was returned to the marque’s factory in Molsheim so a supercharger could be installed.

Fast forward to 1971 and the car sold for a jaw-dropping $59,000, at the time making it the most expensive automobile in the world. It is still quite close to holding that title as chassis No. 57374 was last sold in 2010 for a whopping $40 million. 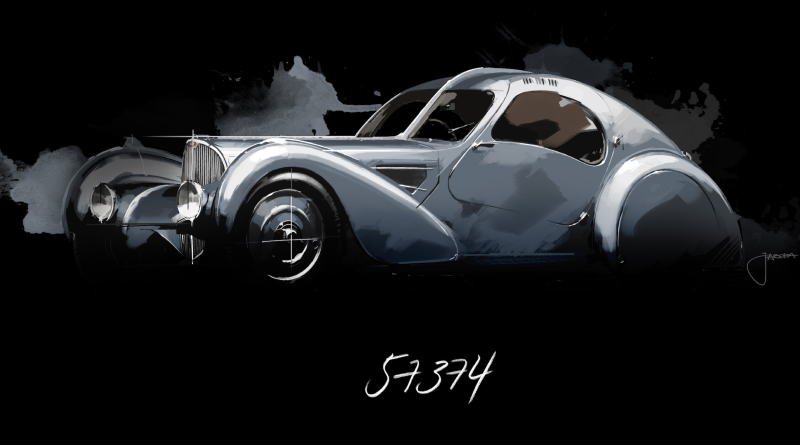 Known as “La Voiture Noire” (The Black Car), the missing Bugatti Type 57SC Atlantic was used in promotional materials after it was given to its owner, Jean Bugatti.

Following his death, it is believed the car changed hands between race car drivers and Bugatti engineers before it disappeared off the face of the map in 1941. According to some, the car was hidden away as Germany invaded France during WWII and just never resurfaced.

If it does, experts have appraised its value at more than $113 million.

The fourth of the 4 Bugatti Type 57SC Atlantic with the Chassis No 57453 was kept by Jean Bugatti himself. But what happened to it after Jean died? Its story became very clandestine indeed. #Bugatti #BugattiAtlantic #Type57SC #BugattiHistory #Bugatti110Ans #JeanBugatti pic.twitter.com/uQUhc8pcaK

As you may have noticed during the history lesson, Bugatti has been tweeting about the 80-year-old car fairly regularly. Why?

It looks like they are considering bringing it, or a version at least, back.

After agreeing to build a one-off Type 57SC Atlantic for former Volkswagen Group chairman Dr. Ferdinand Piëch at a cost of $18 million, Bugatti appears to be considering reintroducing the model in general.

Considering the prices that have been paid by as noted above, that move could be a big boost for Bugatti’s bottom line even if the marque only limited the run of new Type 57SC Atlantics to a couple of models.

Bugatti is still holding its cards close to the hood, but the automaker certainly does seem to be teasing that a  new Type 57SC Atlantic is coming down the pike.

“The Atlantic is among the icons in Bugatti’s long tradition,” said Bugatti president Stephan Winkelmann. “In terms of elegance, quality and performance, the coupé was unique in its time and is still unique today. A luxury super sports car. For us, it is both an inspiration and a commitment.”

And, hopefully, an endeavor from the distant past which will be returning in the near future.