The car exudes power and style, but not in a way that’s boastful or offensive 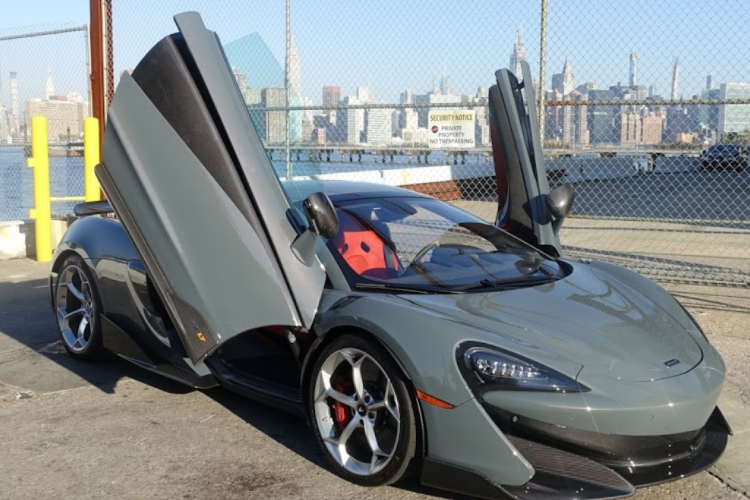 Forget putting up shelves, buying turnips at farm stands or sitting on the couch in your pajamas watching sports and eating out of bowls. This is not what weekends were made for beyond college. You’ve worked hard, and deserve a break — which is why InsideHook has found the perfect weekend activity involving two things you love: fast cars and football.

If you appreciate the gridiron, you’ll know that getting to Giants’ stadium in New Jersey on Sunday is a special kind of hell. And once there, unless you have VIP access, the lines are so long, it’s like Moscow in 1990 when McDonalds opened. I once loved NFL football, too — but it’s not like it was in the days of Dick Butkus and Terry Bradshaw, Walter Payton, Joe Montana or Barry Sanders. Hell, it’s not even like it was when Tom Brady started his career.

So now I prefer college football, where last-minute passing decisions are made by teenagers and the in-stadium experience still feels like an essential American rite. Thankfully I live in New York, where I have easy access to one of the most exciting college football teams in the country: the Army Black Knights, playing out of Michie Stadium in West Point, New York.

When I asked fellow college football fans about the Black Knights, they described the stadium’s green, mountainous backdrop — along with the exhilaration of seeing the ball parachuted in by a West Point cadet, as is the case for every home game.

All you need, then, is a car to drive the 58 miles north to West Point, and that’s where McLaren comes in. While the 600LT Spider could certainly be a daily driver if you’re the sort of person who carries an aluminum attaché case and handcuffs, it’s far better as a weekend vehicle.

I picked up the car (courtesy of McLaren) from the Classic Car Club at Pier 76, behind the Jacob K. Javits Convention Center. As the vehicle’s features were being explained to me, I noticed cyclists and pedestrians had stopped to take pictures through the fence. This type of thing continued until I dropped the car off, a couple of days later. Imagine always looking up to see at least one person filming or taking pictures. After awhile I was fine with it — so long as I didn’t have to parallel-park.

Piloting such a powerful, sleek machine through Manhattan felt like being inside a robotic claw that wanted to tear up the road surface — or like sitting atop a young lion pacing around its cage.  Just like every car in McLaren’s line up, the 600LT needs open roads, horizons, big skies and curves. This is why it’s the ideal vehicle in which to escape the city for some college-football action.

The two-lane Palisades Parkways gave me a limited sense of the McLaren’s handling capabilities, which I’m sure you understand can’t be fully appreciated on public roads. (For that, you might want to look up the nearest racetrack and how often it hosts “open days,” which would make owning a McLaren even more worthwhile.)

If you do end up with one of these vehicles, you’ll also get the option of a new social life, as people are not shy about coming over to chat once they see the gull-wing doors swing open over the roof. The drive to Michie Stadium took just over an hour — and it was a fine, clear morning, with some traffic.

Getting into West Point is serious business. Anyone attending a game has to show photo ID to a member of the military police for inspection. Football fans and grounds’ staff gave us the thumbs-up as we found our designated parking, though I was sure to select a spot away from the teenagers throwing footballs to each other. Tailgating would have been interesting in a vehicle with such small trunk space under the hood, but thankfully, Army fans had already set up their tents, barbecues, buffet tables and Bocce courts by the time we growled into the parking lot, and we received numerous invitations to the makeshift pre-game parties (a few of which were so elaborate their attendees weren’t even planning to leave for the game).

Although there’s a parking shuttle, it was a cool, leafy 10-minute walk to the stadium, and a 20-minute wait to get through security — which would have been shorter if it hadn’t been the moment the sky over West Point filled with paratroopers swooping down into the stadium with the pigskin and an American flag. Although beer is for sale outside the stadium and freely consumed by tailgating fans, Army policy forbids alcoholic beverages from being brought or consumed inside the stadium, which is probably why there were no lines for the restrooms, and no cadets leering at the television cameras.

In addition to football, there are often military displays or parades. For the Morgan State Bears game, there was a show of military equipment, from rocket launchers to four different kinds of helicopter — which actually took off 10 minutes before the game for a flyover. There was also a gymnastics display, free promotional items from local companies, the usual concession stands and cannon fire whenever the Black Knights scored.

The McLaren ran beautifully on the drive back to New York, and with less traffic, I was able to drive the speed limit and really enjoy the winding roads that run almost parallel to the Hudson River. The cabin is fairly quiet for a vehicle with such huge backside muscle, and the interior styling pays homage to the car’s swanky British roots, with a stylish, almost complete wrap of two-tone suede that gives way to carbon fiber only when necessary. Reversing can be tricky, but sensors and cameras increase visibility significantly, and reduce some of the stress that comes from driving, what is essentially, a rocket.

What I like most about the McLaren however, is the way it exudes power and style, but not in a way that’s boastful or offensive.  It’s that rare blend of civility and ferocity that reminds me of the line from Lord Byron’s Don Juan: “He was a man of a strange temperament, Of mild demeanor though of savage mood.”