Sports cars shown off as works of art as part of company's 70th anniversary.

(Ferrari: Under the Skin/London Design Museum)
By John Scott Lewinski

The London Design Museum is taking the most famous sports cars in the world for a spin.

Ferrari: Under the Skin, a new exhibit at the venerable museum, explores the history of Italy’s most iconic automaker — from its origins with founder and obsessed race car driver Enzo Ferrari, to its current status as an elite presence on the world’s tracks and streets. The Maranello-headquartered company celebrates its 70th anniversary this year, making this the perfect time to explore the history and the overall design aesthetic of everything Ferrari at the exhibit. 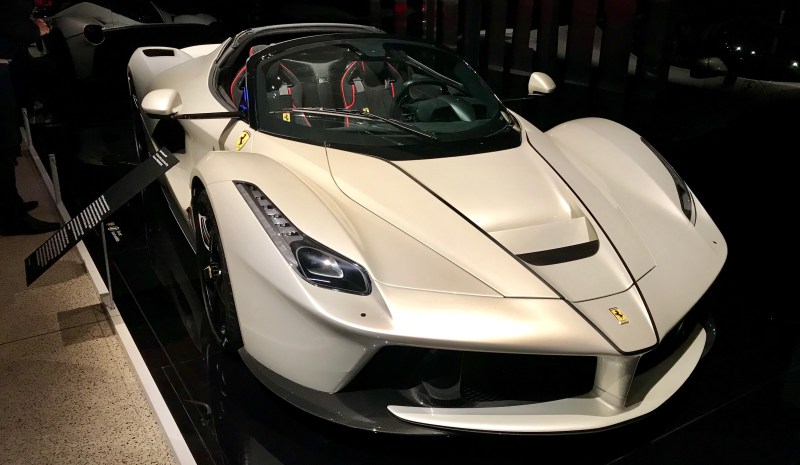 The hybrid Ferrari LaFerrari looks to the future direction of the Italian automaker. (Ferrari: Under the Skin/London Design Museum)

While the great cars of the present day and the storied past obviously make up the bulk of the show, the museum is exhibiting a treasure trove of accessories, from design documents held in private collections to rare letters to Enzo’s suits and glasses. The overriding theme of the entire display from the wheels up is how Ferrari — the man and his cars — rolled in a world of jet set luxury accompanied by absolutely uncompromising drive and attention to meticulous fine points.

While the Design Museum already parked shows on Porsche and Formula One amongst its galleries in the past, curator Andrew Nahum insists his crew saw Ferrari as “the perfect case study in design because the objectives for the creators are so specific and so clear.” 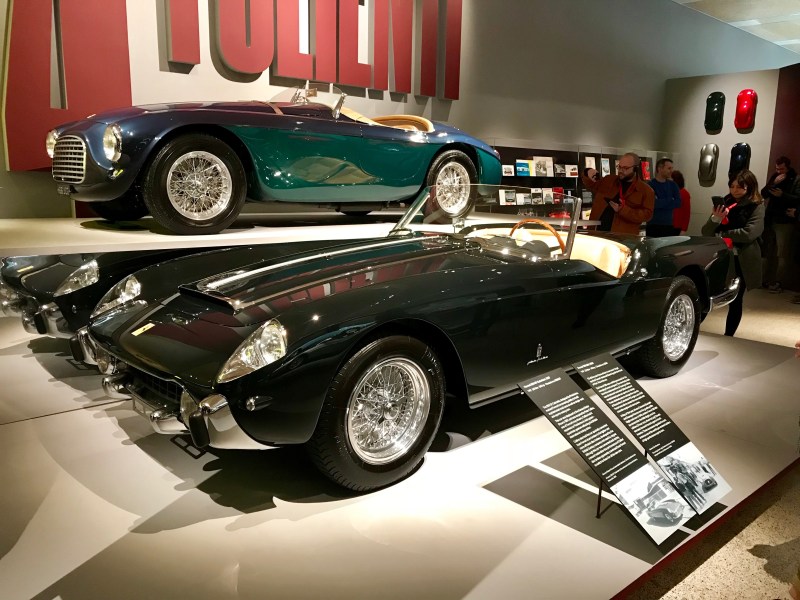 The Ferrari GT Cabriolet V12 was an early example of Enzo Ferrari putting racing power into a commercial car. (Ferrari: Under the Skin/London Design Museum)

“The attention to detail both for mechanical design and for the aesthetics of the car are exceptional and exemplary. Ferrari had that obsession. He cared about everything from performance and engineering to the Ferrari literature and its graphic design.”

That was Enzo. A race car driver from an early age, he was constantly consumed by thoughts of the track and what car would get him or his drivers over the finish line. In fact, he always made it clear that the only reason he designed and built his famous supercars for sale was to fund his racing endeavors. 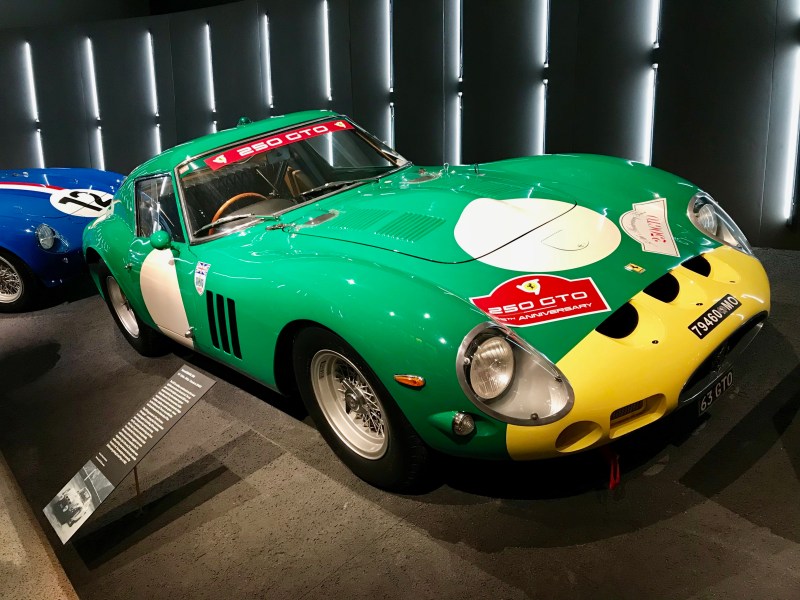 The Ferrari 250 GTO is widely considered to be the most iconic car in the line’s history. (Ferrari: Under the Skin/London Design Museum)

As Ferrari himself put it: “I have never gone on a real trip, never taken a holiday. The best holiday for me is spent in my workshops when nearly everybody else is on vacation…I have yet to meet anyone quite so stubborn as myself and animated by this overpowering passion that leaves me no time for thought or anything else. I have, in fact, no interest in life outside racing cars.”

The world of Ferrari is such a perfect fit in the design museum because the sports-car empire accelerates right into the eternal debate of art vs. design. There are schools of thought that insist art can serve no other purpose but to be art. If any artistic creation goes to fulfill its own purpose — as in the case of a beautiful car — it cannot be art. It must be just a car. Contradicting that philosophy, however, Ferrari built multiple models over the year worthy of the art tag — from the legendary Daytona to the unsurpassed 458. 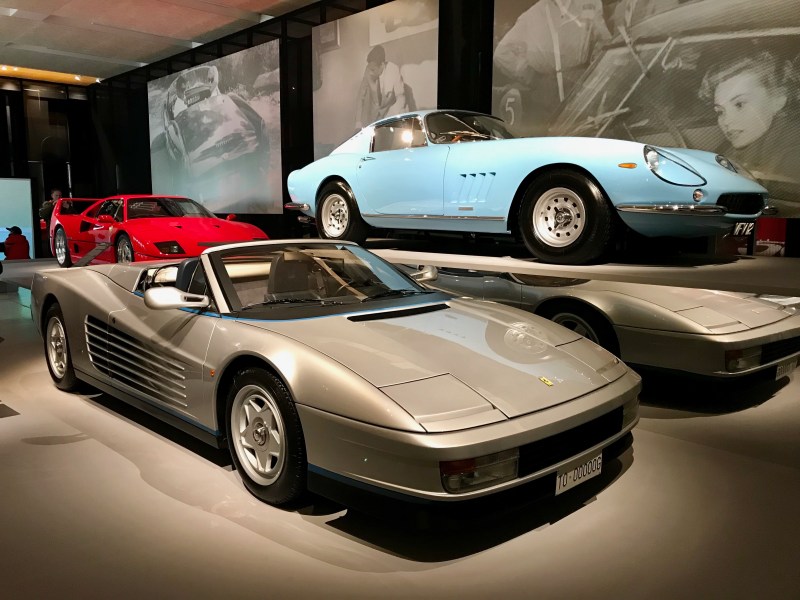 “A major aim of the exhibition is to locate car design within the wider world of industrial design and design history,” Nahum says. “By exposing the techniques and the craft of modeling cars in wood, in wire and in clay, we hoped to provide real interest for visitors with a broader interest in how the things we make and admire are conceived, designed and manufactured.”

“Along the ways, several things surprised me. One was the small and focused scale of the early Ferrari enterprise. In 1947, it built just two cars. Enzo Ferrari’s passion was for racing, so in those early years, he concentrated on building small numbers of single-seat Gand Prix cars and sports-racing cars for events like Le Mans. Building cars in hundreds, and then thousands, for select customers, came later.” 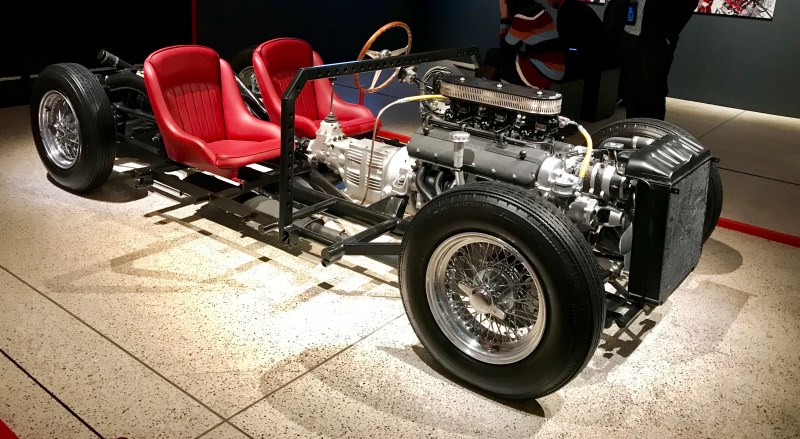 To explore Enzo Ferrari’s attention to detail, “Under the Skin” peels back the hide of automotive design. (Ferrari: Under the Skin/London Design Museum)

The unquestionable thoroughness of the exhibit is all the more extraordinary because this international hub of everything design is not a car museum. It is not the sort of gearhead sanctuary you find at the Petersen in Los Angeles or the Barber in Birmingham, Alabama. All design is fair game at this London hotspot. The minds behind it are just as likely to examine the concept and structural elements of a spork as they might a $500,000 supercar.

Still, Ferrari: Under the Skin packs in the most essential builds and moments in the company’s history. A particular highlight is a film, C’était Un Render-Vous (Rendezvous), epically famous in gearhead circles, but largely missed in popular culture. Playing on a loop in the heart of the exhibition, the film features a Ferrari 275 driven with ferocious speed through the morning streets of Paris. Shot from the driver’s POV and without permits or special street closures, it was a death-defying, perhaps irresponsible production to celebrate love via Ferrari speed.

In other words, a work of art. 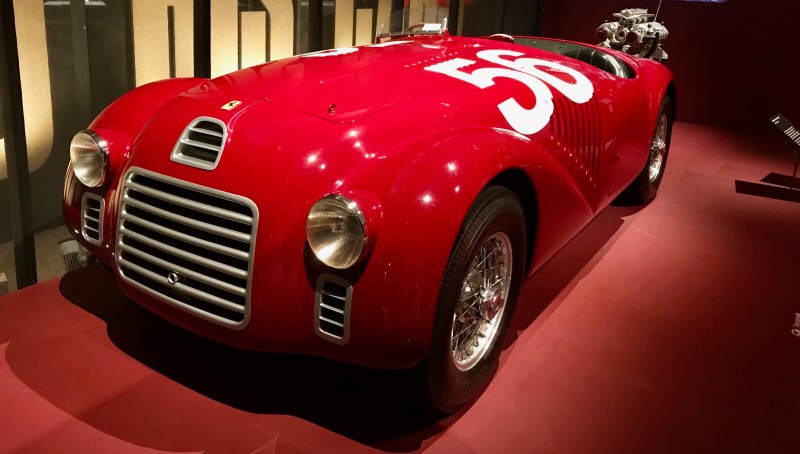 The Design Museum its free to enter and the general standing exhibits are open to the public. The Ferrari special program runs through April 15 and offers special advance booking for £18. For more information, see:

Rendezvous from Matthew Fisher on Vimeo.