It dethrones the Lamborghini Urus by [checks notes] 0.5 MPH

Pop quiz: What’s the fastest speed limit in the U.S.? Currently, it’s 85 MPH, but only on certain sections of one highway in Texas. Lawmakers have proposed an American autobahn in California, but as it stands, most of us are (legally) only ever going to push our cars up around 80 MPH.

So why would anyone need a luxury SUV that can go 190 MPH? That’s the question we’re posing today to both Bentley and Lamborghini. But before we get to that — first, the news.

This month, Bentley announced the new Bentayga Speed, an enhanced version of its luxury SUV that now holds the title as world’s fastest production SUV. This is normally the part where we’d cue the confetti cannons, but we triple-checked our stat books and aren’t sure we can wholeheartedly endorse this coronation for three reasons:

So sure, go ahead and call the Bentayga Speed the world’s fastest SUV if you want, at least until Lamborghini releases a faster edition of the Urus. And of course, there’s a lot more to the new model than the top speed. But there’s another layer to this pissing contest that should be pointed out: both of these automakers are owned by the Volkswagen Group.

There’s a conspiracy theory to be had there, but we’ll leave that up to someone else. Meanwhile, we’ll pass on these top speed shenanigans and wait patiently for the electric Macan. 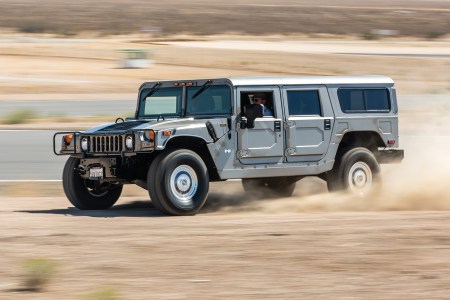