It’s golden hour, and I’m flying 1,200 feet over Huntington Beach in the backseat of a T-33 Shooting Star subsonic jet trainer. Former commanding officer and team lead for the Canadian Snowbirds Air Demonstration Squadron Rob “Scratch” Mitchell is in the cockpit. “Sorry I’m not very chatty, but there is a lot going on at the moment,” he says over the headset. Alongside our fellow Ace Maker T-33, a B-25 Mitchell Bomber is in lead, and there are five aircraft to our right, including a jet-powered Waco biplane. As Thursday evenings go, this one is far from average.

I tell him no worries and say “wow” for the tenth time. The smile behind my oxygen mask is massive. I’ve been in helicopters and seaplanes, but flying in formation with world-class pilots blows those experiences out of the water. The coastline is bathed in end-of-day Southern California sunlight, and we make several passes over ‘Show Center’ for a Pacific Airshow photo flight. I’m awestruck. It’s a total “holy shit, this is so cool,” moment, but also surprisingly emotional. I can’t say when it hits, but up there, I totally get why people fall in love with flying.

Admittedly, an easy sentiment when you’re only along for the ride. Chatter from the air traffic control tower regarding air space, being asked to drop ten feet or keep pace with the slower planes, comes over the headset with no action required on my part. “We’re flying slow at our lowest range to match their max,” Scratch tells me. “This thing can do 600 miles an hour and is barely idling at 200.” Produced by Lockheed in the 1940s, the T-33 Shooting Star was the first operational military jet trainer and used to train pilots around the world before being retired in 2017. While it would have been cool to taste a little more speed, as we break away from the bomber on our return to John Wayne Airport, there’s a hint of the T-33’s latent capabilities.

A 20-year veteran of the Royal Canadian Air Force, third-generation military pilot (his grandfather flew Spitfires in World War II, dad jets during the Cold War), and film pilot with over 6,000 hours of flight time, Scratch is kind of a legend. Back on deck at Lyon Air Museum, he talks about the two-ship act he’ll fly with Greg “Wired” Colyer (owner of the T-33s) at the Pacific Airshow that weekend. “I’ve always wanted to do Huntington because I love flying over big beaches, but the point of being here is to share my passion for aviation and give people an insight into what I love about flying. And when you can do that for a million people on the beach, it’s huge.” 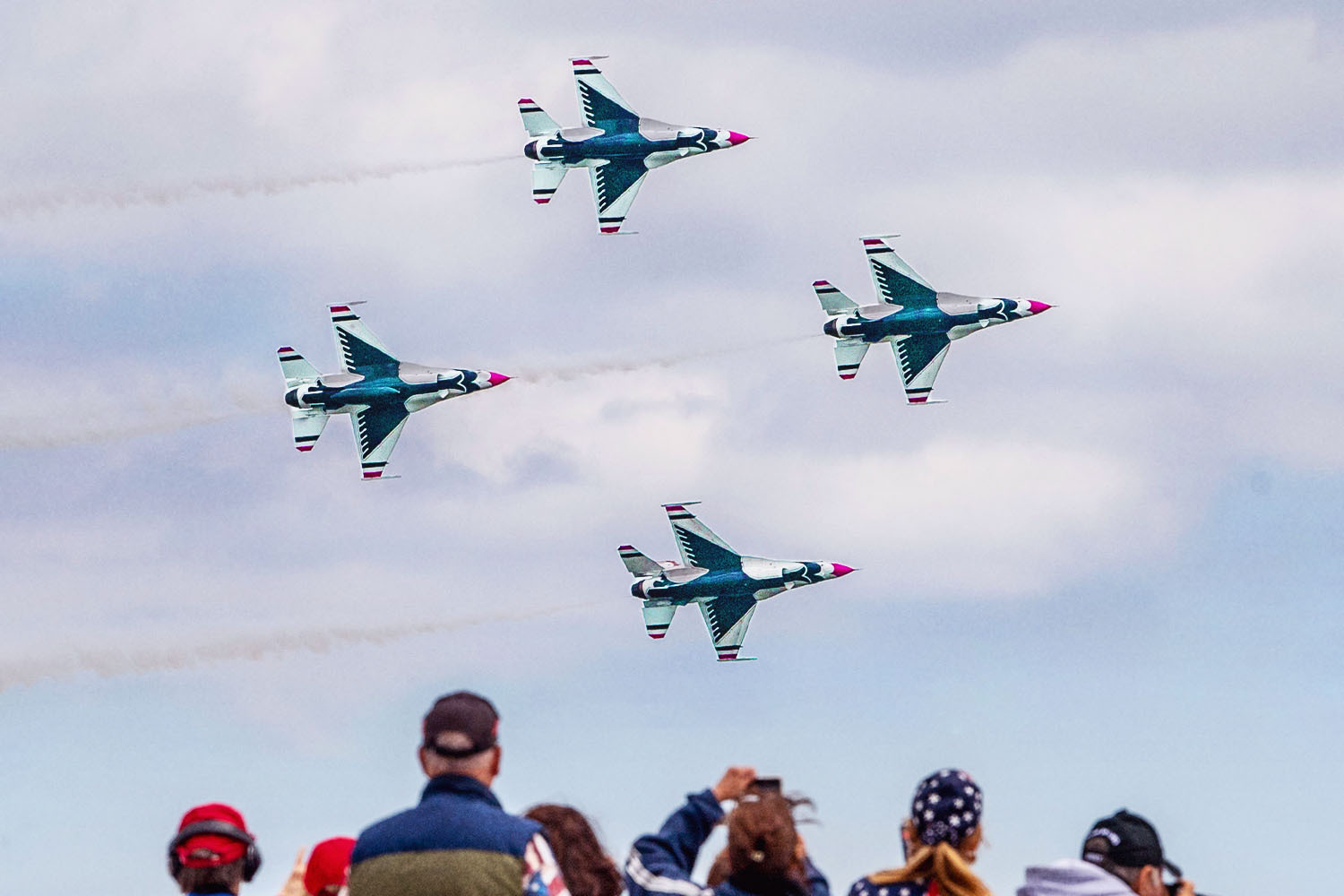 Air Shows Are a “Dangerous Proposition,” But the Appetite for Them Is Insatiable

No stranger to airshows, during his military career, Scratch spent three years as a CF-18 solo act and three seasons with the Snowbirds as number seven pilot on the outer left wing before returning as team commander and lead for two years. When I ask what his T-33 performance with “Wired” might entail, “formation loops, rolls and head-on passes at 800-900 hundred miles per hour” are casually mentioned. “We aim to make it exciting,” he says.

And when it comes to such high-tempo aerobatics, the Pacific Airshow is America’s biggest aviation event. Watched by three million people in person over the weekend with more streaming on Hulu, military and civilian pilots and aerial display teams, including the U.S. Air Force Thunderbirds, thrill the crowds. A Huntington Beach native, executive director Kevin Elliott says the show is like the Super Bowl, except with really cool planes. “With eight miles of beach to sit on, parking lots for R.V. camping plus all the boats out on the water, this is the largest maritime event on the western seaboard. Ocean view rooms at the Hilton and Hyatt across the street go for $1,500 a night, and there are viewing parties over in Newport Beach,” he tells me.

With its sunshine and golden sands, Surf City USA is indeed a fine setting for such a spectacle — one that proudly represents all branches of the armed forces and celebrates their service. Into aviation since childhood (building model airplanes earned him the nickname “Plane Brain” and, yes, there are still a few hanging up in his garage) Elliott has proudly turned his hometown airshow into what many call the best in the world, since taking over in 2017.

“After taking a year off for Covid, we came back even bigger in 2021, hosting all three North American jet teams, the Canadian Snowbirds, the U.S. Navy Blue Angels and Thunderbirds — the first time in history it’s been done.” Elliott says while the Pacific Airshow is a family-friendly affair, the Thunderbirds are a major draw card. “We’re close to Nellis Airforce Base in Nevada, so it’s a great location for them to bring their families, but Huntington Beach is also the number one recruiting show for the Air Force, so we help them have a good time and achieve their mission.”

The USAF Thunderbirds: Smoke On

Rock stars of the fighter pilot world, the Thunderbirds’ job is to demonstrate the capabilities of the F-16 Fighting Falcon — one of the world’s best precision tactical bombers and air-to-air combat aircraft. And with their incredibly tight blue uniforms, aviator sunglasses and precision flying skills, they look damn good doing it. After the team landed at Joint Forces Training Base Los Alamitos, I’m able to grab a few minutes “planeside” with Squadron Commander Lt. Colonel Justin “Astro” Elliott a day before the show starts. Despite being a USAF Weapons School (basically the Air Force version of “Top Gun”) and Test Pilot School graduate, Lt. Col. Elliott shares that being a Thunderbird is the most meaningful job he’s held in the Air Force.

“These red, white and blue airplanes were commissioned back in ’53 to connect the American population to its military, a significantly bigger role to me than recruiting. It’s an inspiration and one that I’m honored to be taking care of.” Lt. Col Elliott’s first season as squadron lead coincided with a landmark USAF birthday and the Thunderbirds’ 70th next year. A great honor that caused him to refocus the team on a commitment to excellence. “What you’ll see in the show is the tightest this team has flown in about 30 years, but we’re going to take it one level tighter to really mark the 75th anniversary of the Air Force.” Show sequences feature 30 maneuvers, including a Trailed Diamond Clover Loop, Delta Rolls and 360s (the Delta is all six jets), a 5-card Flat Loop with finishers like the High Bomb Burst Cross and V-Tron Pass.

He’s flown 30 different aircraft during his career, but it’s Lt. Col Elliott’s first mission in an F-16. “This is an aircraft with infinite power where you can indefinitely sustain 9Gs, which is beyond human limits. So, it’s unforgiving on the G side and just a tiger by the tail you have to manage, making it perfect for this demonstration.” With the potential to reach three million people at Huntington, he says this is the big one. “Our mission is to inspire people to give the best version of themselves to something bigger. When you see us live and feel the thunder, it’s life-changing.”

Flying evaluations determined positions for the first time in decades, with new pilots flown in the backseat of an F-16D making loops and rolls on Lt. Col. Elliott’s wing. Those able to maintain character and keep their heads were selected. “People fly with different personalities,” he says. “Some are very rigid but precise, and those make good solos. Some are very smooth and willing to accept minor deviations but do so smoothly and those make very good diamond members.”

In the number three slot, Major Lauren “Threat” Schlichting will fly as close as 18 inches from the number one jet’s missile rail during formations, including the signature diamond pattern. “Threat” can’t tell me how she came by her call sign (I’d have to buy her a beer first) but can share what inspired her to become a fighter pilot — NASA astronauts who visited her elementary school in Stillwater, Minnesota…although she was more enamored with their pilot credentials.

Since pinning on her wings she has logged over 420 combat hours in an F-15E Strike Eagle while deployed for Operation Inherent Resolve and is now the sixth female pilot to fly with the elite squadron in its 69-year history. “Being able to fly these jets in America’s colors and meet so many people across the country with a team that feels like family is just a really cool mission,” she says. Currently, only 7% of pilots in the Air Force are female but Maj. Schlichting says if seeing her fly can inspire anyone to follow their goals and dream big — like the fighter pilots who inspired her as an eight-year-old girl — then she considers her mission accomplished.

Thunderbird pilots spend thousands of hours practicing highly sustained maneuvers experiencing positive and negative G-forces — from four during takeoff to five or six when in a loop. (Multiply your body weight per “G” to get an idea of what that might feel like.) To prevent blood pooling during high Gs, they wear pressurized Advanced Technology Anti-Gravity Suit (ATAGS). The elite fliers also spend around 270 days on the road annually during show season over their two-year assignment, but for Maj. Schlichting, it’s an honor to wear the patch. Recently revamped, she says teammates “Strobe” and “Gunbone” (Maj. Zane Taylor, Thunderbird Pilot 4, and Maj. Kyle Oliver, Thunderbird Pilot 5) worked with Disney on the new-look show with arcs and pacing on their formation maneuvers and solo routines telling a story to music.

I caught up with executive director Kevin Elliott before he spoke at the Joint Forces Training Base Los Alamitos media opener, who tells me everyone has a story where aviation or an airshow means something in their life. “From adults who like to take pictures of airplanes and former military members to people who went to shows as a kid. You don’t have to be an enthusiast to love aviation, and know what you’re watching here is absolutely bitching.”

The Pacific Airshow heads to Australia for an international debut on the Gold Coast next August and will return to Huntington Beach the following month for its regular hometown programming. 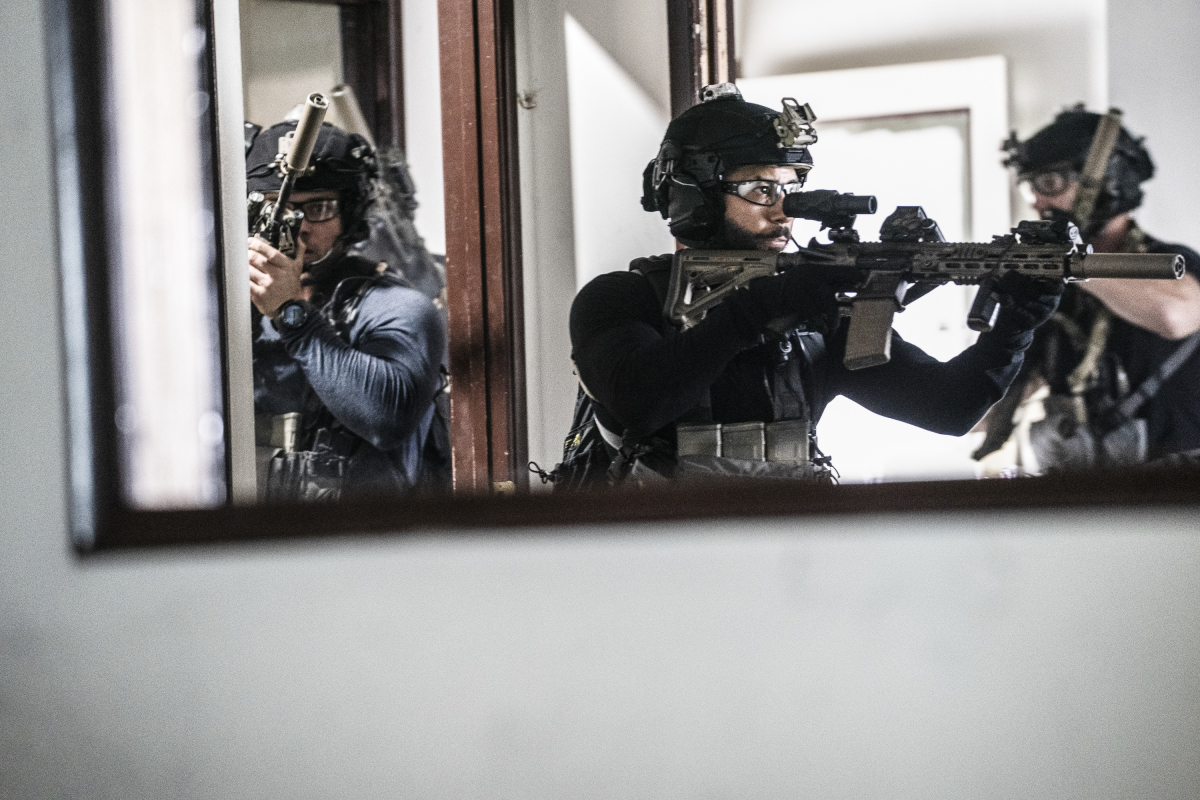 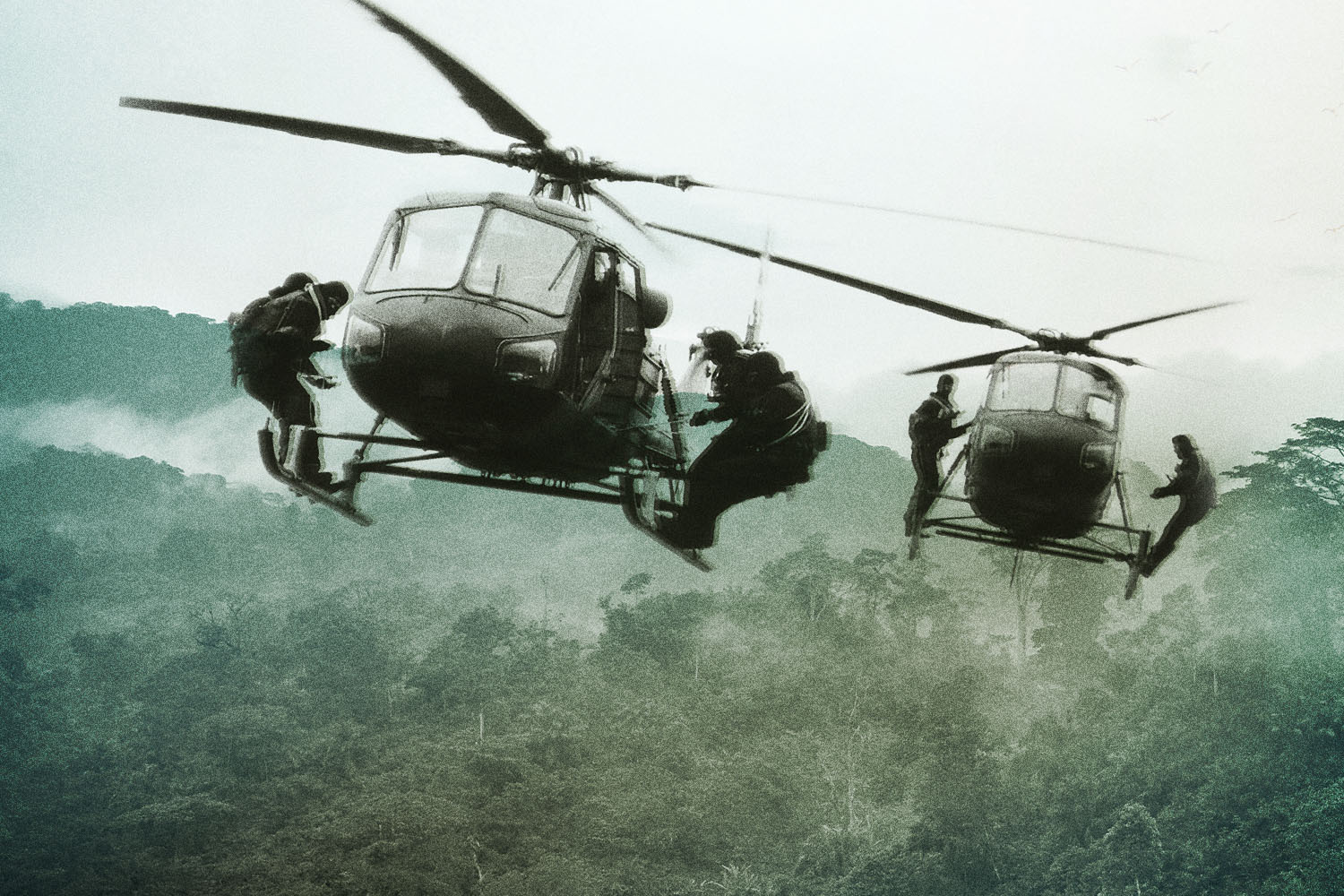 Inside the Selection Process for SAS, Britain’s Most Elite Special Forces Unit 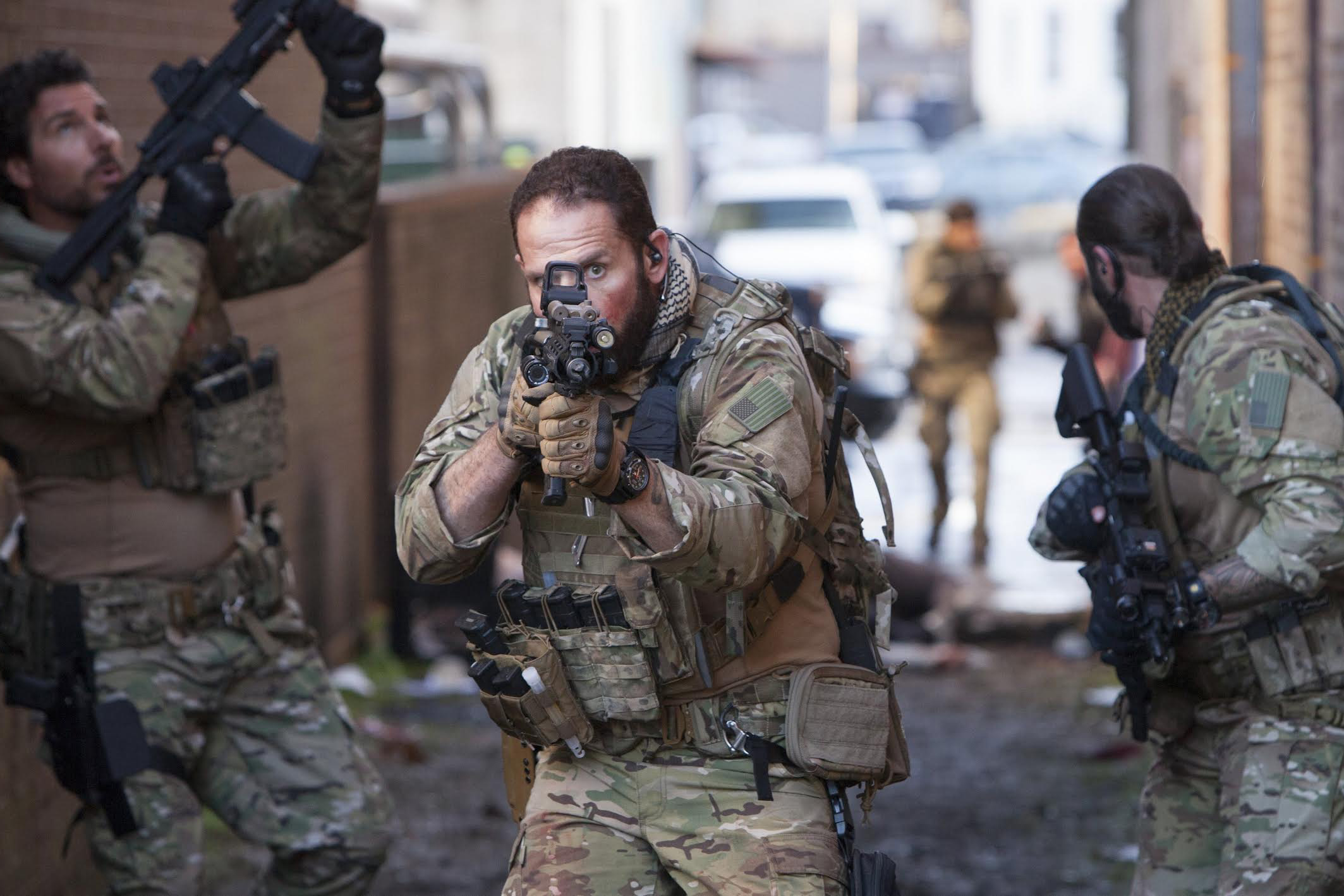