How to Do Machu Picchu Like an Adult With Money

This isn't the view from Belmond's Sanctuary Lodge, but it's pretty damn close
Eli London
By Eli London @elilondon100 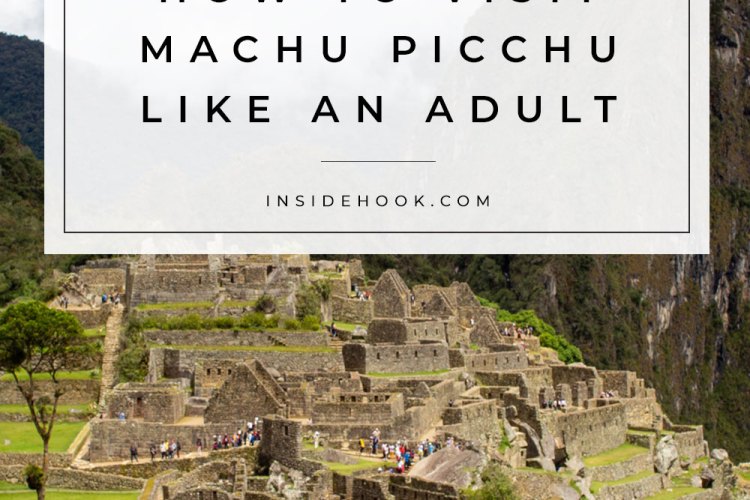 Machu Picchu was once a relatively untrodden destination, bringing in fewer than 100,000 visitors a year in the late ‘80s and early ‘90s. That number has now climbed to more than 1.5 million, with the ruins marketed as one of the “Seven Wonders of the Modern World.” And having visited the site earlier this year, I can personally confirm that it is dope as hell.

It’s a spectacle unlike any I’ve seen before, perched 8,000 feet above sea level with verdant, jagged mountains rising high above you in every direction, as if you’ve been transplanted into some pre-Columbian version of Avatar. Perhaps the most refreshing part of the journey is that visitors seem to appreciate the moment for what it is: a truly singular and momentous experience. Sure, people take too many selfies, but the vast majority engage with the site on a more authentic, human level. As a skeptic of over-touristed destinations, I was pleasantly surprised.

Now, the vast majority of people traveling through Peru and specifically to Machu Picchu do so as broke backpackers, staying in shared-room hostels, eating at hole-in-the-wall restaurants, taking miserable overnight buses and wearing the same dirty clothes day-in, day-out as part of a multi-month journey.

But what if that’s not exactly your style? What if you want to relax and enjoy the utmost comfort on this once-in-a-lifetime journey to this legendary architectural site? What if you want to do Machu Picchu like a boss, or, at the very least, someone with disposable income? Good news: we’ve got marching orders to achieve exaclty that.

Get Thee to Cusco

In all likelihood you’re going to have to fly to Lima first, which is more of a gift than anything else. We recommend you spend a few days in Peru’s capital (which also happens to be South America’s culinary capital) and eat your face off.

From there, you’ll take either a bus or small plane to Cusco, the gateway to Peru’s Sacred Valley. The Sacred Valley is home to countless significant Inca heritage sites, first of which is the city itself, which was the center of the ancient Inca empire.

Related: How to Eat Your Way Through Lima, The Best Food City in the Americas

You should stay in the Palacio del Inka, a 15th-century palace built on real Incan stones in the heart of the city. Upon arriving, you’ll be offered coca tea to help with altitude, as well as a property tour (at your leisure) to learn about the hotel’s history, which is obviously extensive. They’ll be adamant that you basically rest the first day to acclimatize and avoid altitude sickness, which we did and I would highly recommend. They have oxygen available should you need it. Rooms are about what you would expect from a luxury hotel: well-appointed and comfortable, many complete with balconies overlooking the cobblestone streets surrounding the palace.

In the mornings, local Incan women arrive to sell alpaca wares; not the (live) baby alpaca they bring along with them, which is just about the cutest thing you will ever see. The breakfast buffet is downright regal, and included. The other meals, while not included, are delicious, but I’d recommend exploring all that Cusco has to offer once you’ve spent a day acclimatizing.

Here’s what else you should do:

On to the Sacred Valley

Hire a driver (which you can do with the concierge) from the hotel to Urubamba. If you drive straight, it’s a bit over an hour. But you don’t want to do that. As mentioned before, the Sacred Valley is full of wonders. There are three major stops, all mostly on the way, that you’ll want to stop at:

Where to Stay in Urubamba

The Sacred Valley is full of small towns that all have their own charm. I recommend staying in Urubamba and more specifically at Palacio del Inka’s sister hotel, Tambo del Inka. Located on the banks of the Urubamba River, this hotel has been around for just a decade and thus is much more modern than its Cusco counterpart. Its high, wood-paneled ceilings will remind you of something Ernest Hemingway would have stayed in. You’ll feel immersed in nature, as water and vegetation fully surround the property. It also features an Insta-friendly infinity pool overlooking the surrounding mountains. The Hawa restaurant on site sources food from nearby local farms as well as its own garden. The rooms are overly spacious, and open up right onto the surrounding gardens, making you truly feel like you are in a palace in the middle of nowhere.

If you don’t know what you’re doing, setting up your day trips — especially in high season — can be a pain in the ass. Luckily, you can do everything ahead of time through the hotel, who partner with Venturia Travel to plan any journeys that strike your fancy. We arranged train tickets to Aguascalientes (the town at the foot of Machu Picchu), as well as bus and entrance tickets to the ruins themselves. And the train platform is literally on site at the hotel (the only way in and out of Aguascalientes, the last town before Machu Picchu, is via rail). You can also book a vetted tour guide for your visit to the site, but we opted to book one at the gate.

The train ride will take about two-and-a-half hours, and it’s a beautiful ride, flanked by river, mountain and jungle vistas all along the way. The tour of Machu Picchu itself will take about two hours, unless you elect to climb one of the two mountains that are only accessible from inside the premises (Huayna Picchu or Machu Picchu Mountain). Those climbs require separate tickets, which can also be secured by Venturia and are rationed to the first 400 people who arrive each day.

Afterwards, book a stay at the Belmond Sanctuary Lodge, the only hotel at the gates of Machu Picchu, so you can get immediately into relaxation mode after seeing one of the world’s great wonders. Get a massage at the on-site spa and have a few cocktails and a meal while overlooking the citadel you just wandered through. Conversely, this trip can be reversed, with a stay at Tambo del Inka after you get a super early start to see Machu Picchu. Afterward, take the train back to Cusco and fly away home.

If you are a much more adventurous spirit but still want to do so luxuriously, Aracari Travel provides custom-designed, multi-day luxury treks from the Sacred Valley to Machu Picchu. This will allow you to see many sights that are only accessible on foot, as they sit along the centuries-old Inca Trail. You can combine this with any or all of the aforementioned experiences depending on how much time you’re able to take. No matter how you spin it, you can’t go wrong. It’s considered one of the great wonders of the world for a reason.

Meet Balldo, The Device That Turns Your Testicles Into a Second Penis
Is Hot Tub Sex Ever Good?
On the First “Real Time” of 2021, Bill Maher Explores the Trump Legacy
What’s So Great About Indian Creek Island, Anyway?
Is Roger Federer Moonlighting as a Peloton Champion?
Report: Elizabeth Holmes Destroyed Evidence in Theranos Investigation