How to Make the Most of 48 Hours in Savannah, Georgia

Let the "Hostess City of the South" charm you during a quick weekend getaway. 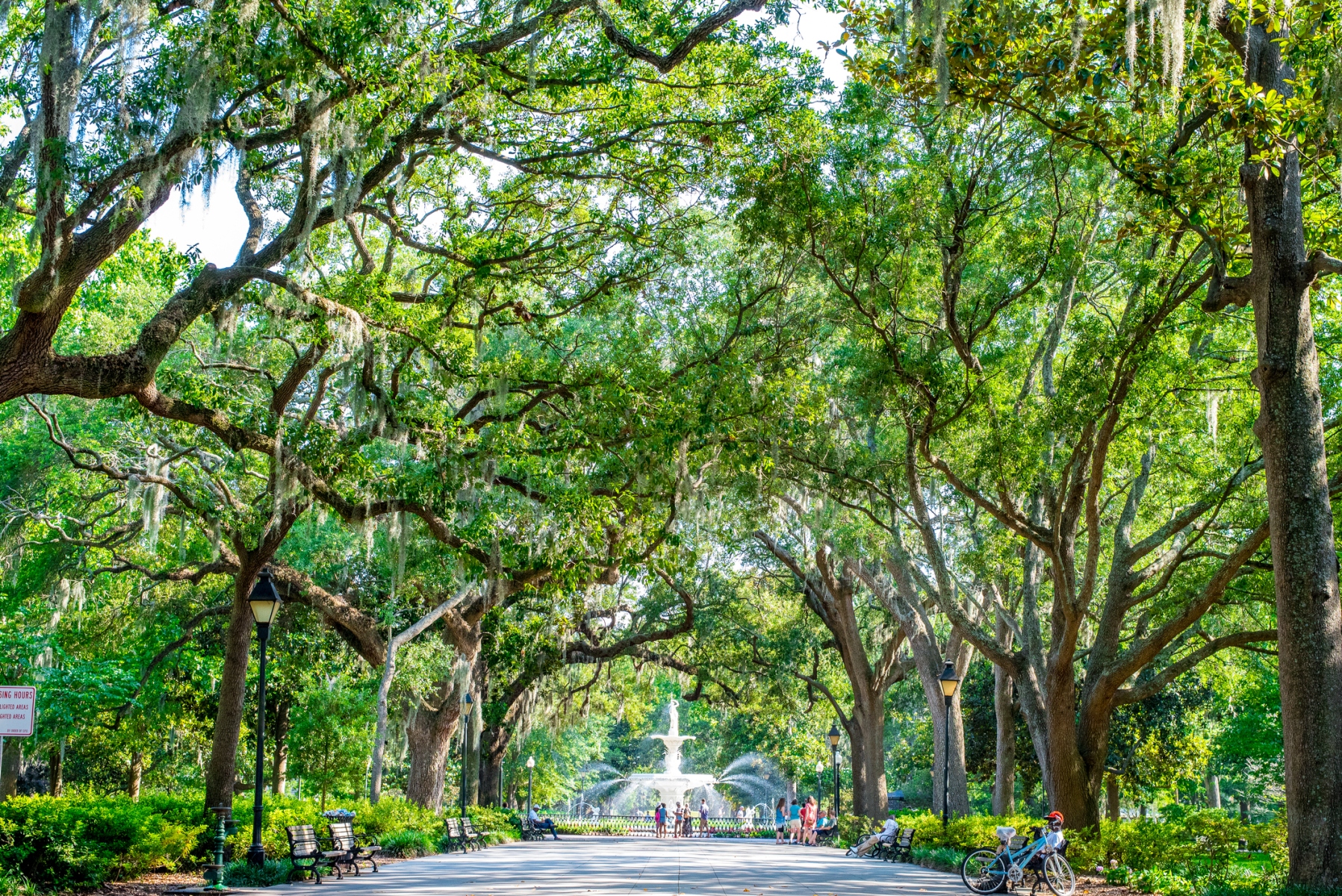 Forsyth Park is worth getting lost in while spending the weekend in Savannah, GA. (Getty)
By Ariel Scotti / December 4, 2018 5:00 am

A bustling part of the new American South, Savannah, Georgia is more than a moss-covered city with a storied history—it’s an elegant, square-dotted hub of “go-cups,” award-winning restaurants, and modern amenities.

I was lured to the “Hostess City” for the first time thanks to a grad-school friend’s wedding (she’s from nearby Statesboro), and although some of the southernly warm weather I was craving was tapering off in late November, the charming town did not disappoint—even with only 48 hours to enjoy it.

Passing through the clean, glass-ceilinged atrium of Savannah/Hilton Head International Airport is a good preview of the numerous historic squares that are impossible to avoid in the city’s Historic District, which is just a quick 20 minute drive away. Skip the taxi line where I was quoted $36 and launch your Uber or Lyft app to save anywhere from $10 to $20.

We stayed at The DeSoto Savannah, a lovely, balconied, 1,540-room hotel in the heart of the Historic area on East Liberty Street. It’s so centrally located that it wasn’t necessary to hail a car or ride public transportation during the rest of our stay. Featuring a white tableclothed dining room, poolside bar and clean, comfortable rooms, the DeSoto met our needs at $160 a night.

Additional options include The Kimpton Brice Hotel (from $230 a night), The Mansion on Forsyth Park: Autograph Collection (from $259), or The B Historic Savannah (from $175).

The Savannah College of Art and Design (SCAD) might have galleries scattered throughout the city, but the one you shouldn’t miss is the SCAD Museum of Art (general admission $10), just north of the Georgia State Railroad Museum in the western portion of town. Currently on display is veteran photographer Elaine Mayes’ collection: “In the Present: Five Decades.” Standouts include the black-and-white “Autolandscapes,” a series of photos Mayes took from the inside of moving cars. 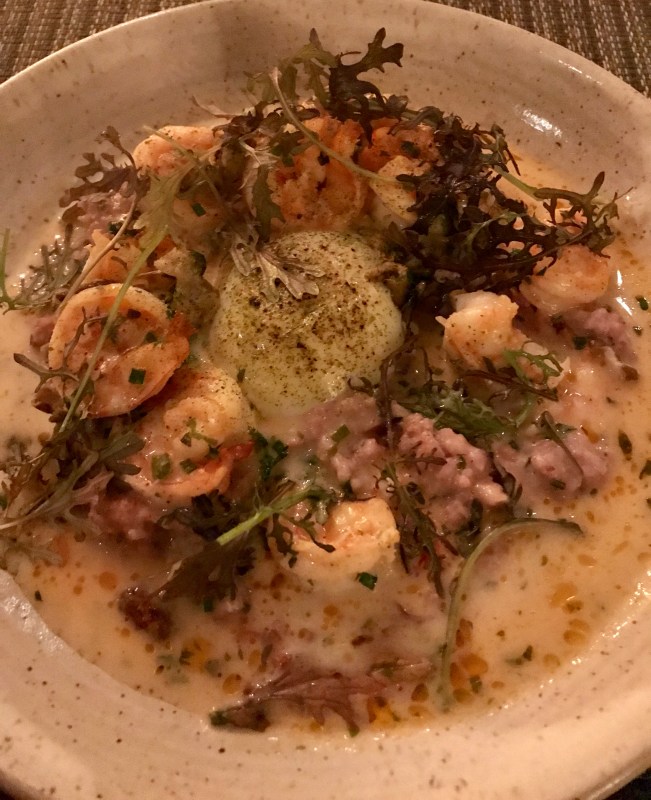 In recent years, Savannah has experienced a culinary revolution; moving away from the fry-everything stigma associated with Southern cuisine to a more refined approach. For a truly unique take on contemporary down-home cooking, book a table at Husk. The nearly one-year-old gem is a sustainable, locally-sourced restaurant with a menu that changes daily, based on availability, with a few consistent staples.

Start your evening at the bar with a strong drink like the mezcal cocktail, Poblano of Puebla ($12) before moving on to your table. Then, choose from appetizers like the perfectly-cooked roasted octopus garnished with fennel and pumpkin seeds ($15), the poppy-spotted trout or snapper tartar ($15), or the house-cured, fried bologna sliders ($6/each). One “supper” item found on the menu year-round, an expected shrimp and grits dish ($25), is anything but, with an over-easy egg, mustard frills, and mushrooms. Save room for dessert, though, as the apple torte ($9), served under caramel ice cream, is divine.

A few other note-worthy restaurants in the area include Vic’s on the River, Atlantic, and The Grey.

Breakfast Biscuit – 11am (some of us sleep-in on vacation)

If you have an early flight on your last morning in Savannah like we did and can’t find time to squeeze in any stops before heading to the airport, do yourself a favor and set time aside on your second day to line up outside Maple Street Biscuits in downtown. Yes, there might be a line. Hell, yes, it’s worth it. Strongly consider ordering The Five & Dime, a biscuit sandwich of fried chicken, “pecanwood smoked bacon, cheddar cheese topped with sausage gravy with a little kick.” Avoid looking at the calorie count.

Savannah is one of only a few places in the country where drinking on the street is legal, and to-go cups, a.k.a. travelers, are a city tradition. So, it’s a good idea to make occasional pit stops at a beautiful bar like The Olde Pink House or a local beer house like Moon River Brewing Company. While Moon River has views of its own, it’s worth it to grab a go cup or two and wander along the Savannah River, through the city’s lush squares full of Spanish moss-draped trees or simply get lost in Forsyth Park. 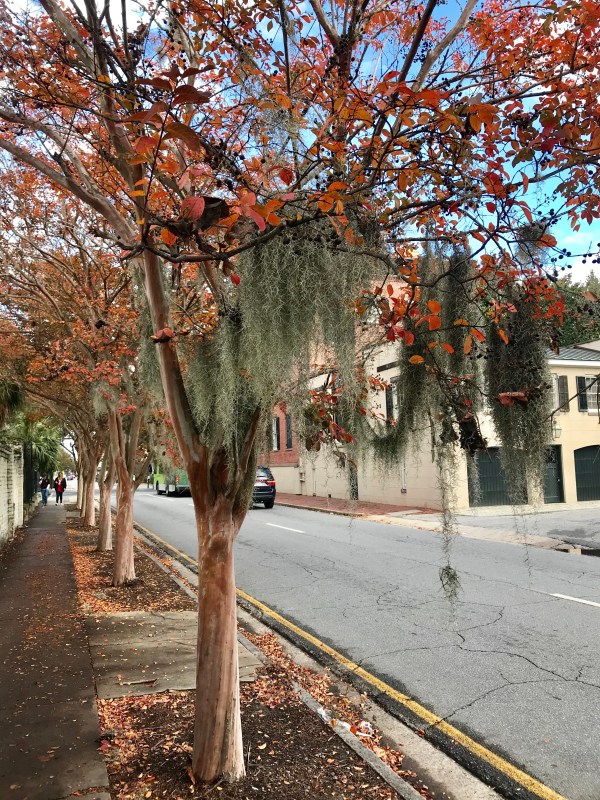 While we had to get ready for Saturday’s early evening wedding, a few items that would have battled it out for spots on the weekend’s agenda were an old-fashioned trolly ride past the city’s highlights, like the iconic Forrest Gump Bench on Chippewa Drive, and a nighttime ghost tour through Bonaventure Cemetery.

If you’re up for it, stop off for a pre-dinner drink at the subterranean Alley Cat Lounge. You know you’ve walked into the right place when you’re handed a cocktail menu printed on what looks like a miniature newspaper. The Lounge offers an eclectic mix of locally brewed craft beers and Champagne cocktails like French 75s.

One of the great draws of Savannah is that it offers enough restaurant options to please any foodie…which also makes choosing one particularly hard during a short stay. B’s Cracklin’ BBQ makes the decision a little easier. Voted one of “The South’s Top 50 Barbecue Joints 2018” by Southern Living, B’s is famous for its rib plate ($15.99 per 1/2 slab) and Brenda’s brisket ($16.99), served with a tangy mustard-peach sauce. Don’t pass up the “cackling cornbread” (3 pieces for $3.75). Cooked on a griddle like pancakes, this original corn bread variation is crisp on the outside and laced with pieces of pork skin on the inside.

Head to the midcentury-modern vibes coming out of Daniel Reed’s Public Kitchen and Bar and peruse the extensive wines-by-the-glass list. The French Creation Grosset Cotes du Rhone ($12) is dry but light for the never-too-cold southern temps. If wine isn’t your thing, the Public has a full spirits bar, too.

Forsyth may be the city’s largest and most heavily trafficked park, but for an equally lovely and less crowded run (some of us exercise on vacation), head to Daffin Park between the aptly-named Parkside and Live Oak neighborhoods. There you’ll find an easy but beautiful 1.5-mile route with views of Grayson Stadium and 80 acres of forests, gardens, tennis and basketball courts as well as a dog run.

Sunday brunch in Savannah is like church, a ritual that everyone you know is invited to and many attend. One hot spot that offers banquettes long enough to fit such a tribe is The Collins Quarter. Choose one of the menu’s several champagnes, like a glass of the Veuve Cliquot ($19), and set it down next to the “Upstream Supreme,” an everything bagel topped with Norwegian smoked salmon, goat cheese, a chive and cream cheese spread plus red onions, shaved fennel and apple slaw ($14).

Just when you think your stomach has reached capacity, it’s time for dessert. The perfect spot to hit that spot is Leopold’s, an ice cream parlor complete with an old-fashioned marble-counter soda fountain. The shop offers flavors it considers standard year-round, like Banana and Butter Pecan, as well as monthly specialties, like December’s holiday-inspired Eggnog, Frozen Hot Cocoa, or Sugar Plum Fairy ($4/scoop).

Pro tip: If you don’t manage to make it to Leopold’s in town, there’s a permanent pop-up version of it just past security at the airport, offering one last chance to satisfy your sweet tooth before you leave town. Now that’s Southern hospitality.