Do You Actually Need an International Driver’s License?

Add this to your list of necessary overseas paperwork

Are you legally allowed to drive this car? It's a complicated question.
Claudio Hirschberger
By Diane Rommel 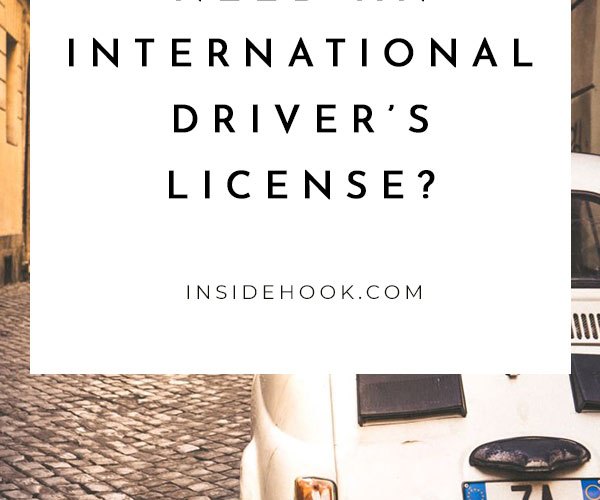 Earlier this summer, I was renting a car in northern Italy, intent on taking it around the top of the Adriatic to Croatia — easy drive, couple hundred miles, NBD. Until I went to hand over my credit card and New Jersey driver’s license.

“And your international driver’s license?”

The truth was I had had one, 10 years earlier, to drive from London to Mongolia — a trip that, indeed, seemed to necessitate the use of an international driver’s permit, which is basically an all-countries booster for your local driver’s license: something to tell a cop in Красноярск that even if he can’t read your license, you’re legal to drive through his town. But I’d never rented a car in Italy before.

“You can take the car,” the agent said. “But if the cops stop you, they can impound it.”

“Does that ever really happen?” I asked.

I spent the next five days driving exactly the speed limit — no cops, no impounds. When I got back home, I investigated. I talked to a friend who’d traveled without one and had to add a $20 “gratuity” to a rental fee in St. Lucia, another who’d been denied a rental in Nicaragua. And lots of others who’d never heard of an “IDP” before.

Figuring out the requirements, country by country, is pretty easy: the State Department’s “country information” pages offer a wealth of information on this subject: for example, it advises that rentals in Slovenia always necessitate the use of a regular driver’s license and an international driver’s permit. France advises that it is “strongly recommended” that American drivers bring a driver’s license and a notarized translation of that license, or an international driver’s permit. The reality, though, may be different on the ground: I rented a car in France not long after the trip to Italy, and my Europcar agent said he couldn’t remember ever seeing an American driver with one.

File all of this under: “easier to have and not use than to not have and have to figure out on the fly how to elegantly bribe the guy at Slovenian Hertz.”

Luckily, IDPs are easy to get, as long as you’re already legal to drive. In the U.S., the State Department authorizes their delivery by two automotive groups: the Automobile Association of America (AAA) and the American Automobile Touring Alliance (AATA). The document — it kind of looks like a very cheap version of a passport — “identifies the holder as meeting the requirements of the United Nations 1949 Convention on Road Traffic to foreign traffic authorities and to car rental agencies” and offers a translation of your ability to drive in nine languages: Arabic, Russian, Chinese, Spanish, French, German, Italian and Swedish, as well as English. (Though note that China is not one of the 150-plus countries it’s valid in, possibly since tourists aren’t allowed to drive there.) It’s also an official form of photo ID, should you need one.

Get one by submitting your application form to the AAA or AATA, or by stopping by an AAA office — I got mine in 10 minutes — with your existing driver’s license, $20, and two passport photos. (AAA members might be eligible for free passport photos, depending on your membership tier.) If you’re already overseas, both agencies can process applications by mail — though this can take an unfortunate four 4-6 weeks unless you’re springing for international express mail.