Crossbows and daggers and dragons, oh my! 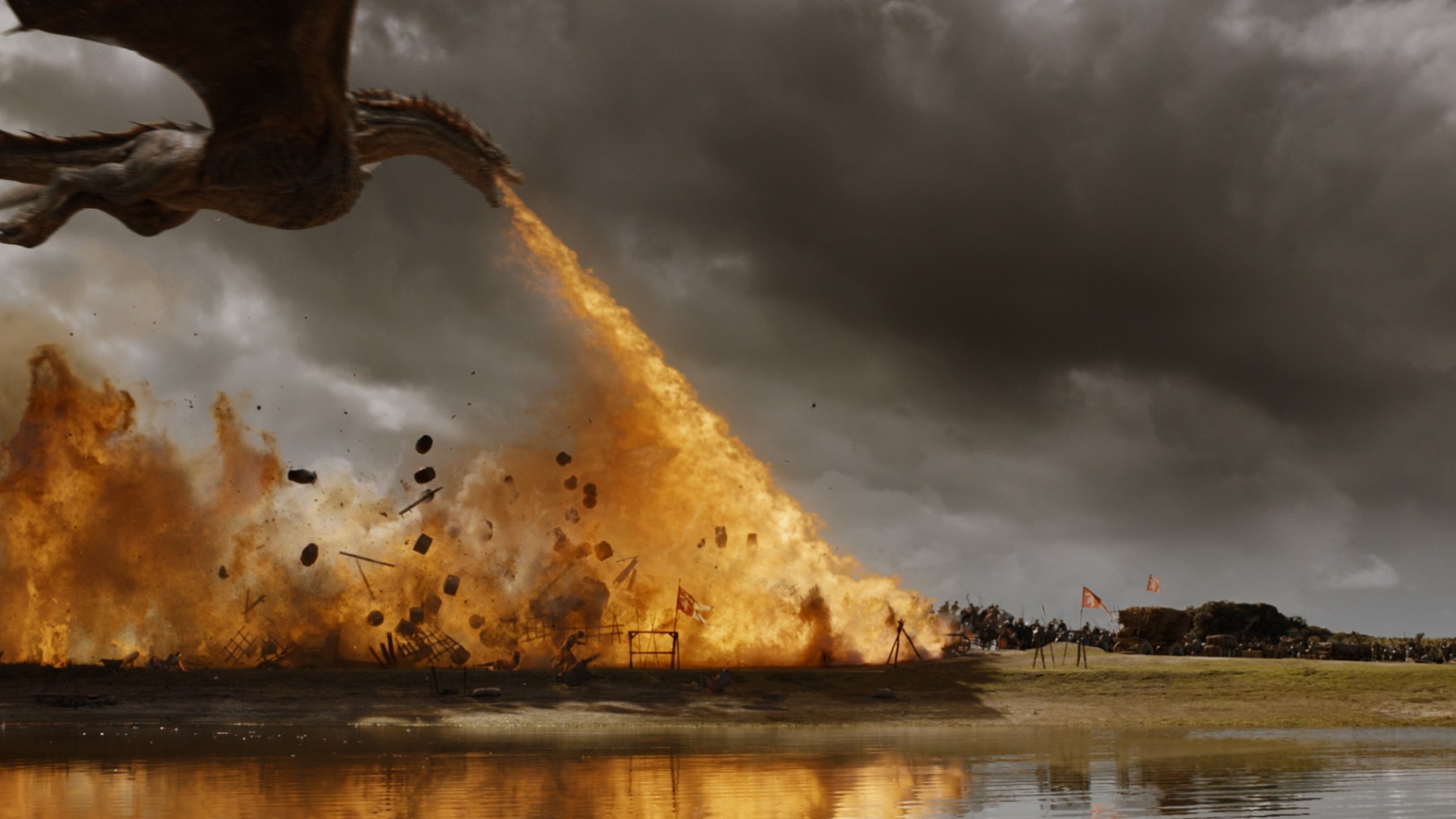 As we approach Sunday’s insanely anticipated series finale of Game of Thrones, the internet’s cup runneth over with content. Speaking truthfully (and somewhat embarrassingly), I don’t know that I’ve ever read so much on one subject, and that includes anything I studied in college.

But as a person who has dedicated way more hours to the books and show than is reasonable (and also has access to a media platform and an editor-in-chief who mercifully indulges my rampant nerddom), I refuse to be given the Tormund/Sam/Brienne/Ghost treatment and disappear unceremoniously as the show finishes its run. My voice shall be heard!

However, rather than add to the web-wide debate regarding the merits/pitfalls of recent episodes and how this whole Westerosi mishegas may play out (Vox’s Emily VanDerWerff does that more eloquently than I could ever hope to), I elected to take a different path — one that leads straight down Memory Lane, celebrating a relatively trivial aspect of the show that I nevertheless believe deserves to have its praises sung: the crazy amount of really awesome weaponry that has been utilized over the past eight seasons.

My only rule: no swords. One because there’s just too damn many of them, and two because their excellent names and backstories would overshadow the proceedings and distract from the myriad other supremely creative instruments of violence I wanted to spotlight. As you can probably tell, I’ve given this an undue amount of thought.

Herewith, my ranking. Read on and remember: no matter how it all ends, all men must die.

(Spoiler alert: this article features details from every episode up to this point)

It’s true that they don’t do the same physical damage as the rest of the items on this list, but the degree of shade being thrown in Westeros must lead to some serious psychological scarring. Don’t believe me? Check out our list of the show’s 101 best insults. #shamelessplug

Not the most creative weapon in the world, but points awarded to Tyrion for using it on the most powerful guy in the Seven Kingdoms (also his dad). Patricide for the win!

Is this a weapon? Does it count? Does it matter when we’re talking about a hole in the floor through which poor souls plummet six hundred feet to their demise? Make ‘em fly!

In most situations, these gigantic flying mortars would be absolutely catastrophic. Unfortunately for the Wise Masters, they happened to be tossing them at a very angry woman with three dragons.

back·fire /ˈbakˌfī(ə)r/ verb: (of a plan or action) to rebound adversely on the originator; have the opposite effect to what was intended. See also: starving one’s hounds in preparation to feed one’s enemies to them, only to be captured by said enemies and fed to said hounds oneself.

23. Children of the Forest Fireballs

A corny cross between Super Mario Brothers and Harry Potter, yes — but give it up for the COTF and their Tom Brady-level accuracy. Plus they saved Bran’s life, which is worth bragging about.

Only got used once, but boy was it a doozy. Extra points for the Ed Sheeran shoutout.

If you can drop a running teenager at 300 yards, you deserve some credit — even if that teenager was running the dumbest, most ill-advised fly route of all time. Zig, Rickon. You gotta zig.

Despite the fact that actress Rose Leslie has endured some good natured ribbing for her questionable bow technique, Ygritte was inarguably the show’s true Deadeye Dick — shooting the love of her life not once, not twice, but three times as he galloped away on a horse while managing to avoid seriously hurting him was both impressive marksmanship and achingly romantic.

As far as knives go they’re pretty plain, but Karl makes ‘em look cool with all the twirling and whatnot. Not deadly enough to keep him from getting run through by Longclaw, though.

For a show this focused on naked ladies and weapons, it’s kinda shocking that ol’ Daario is the only one who thought to combine the two.

While it really only did superficial damage to Jon in the aftermath of his Wildling double cross, you gotta hand it to Orell for being the only guy on the show to transport his consciousness into an animal and then attack someone with it.

How badass is this thing?? Swingin’ around, knockin heads off and lighting reanimated corpses on fire left and right — Uncle Benjen is like a half-dead magical Gogo Yubari on horseback and I am very here for it.

Admittedly, poison is kind of a cowardly weapon, but when it does this to the most hated little f*cker in the history of the show, it makes the list.

Extra points for no one seeing these coming as a weapon. “Oh, you thought these were just meant to provide dramatic campfire lighting in this giant Dothraki temple? Surprise, Khals!” *everyone but Daenerys burns alive*

Extra extra points for no one seeing this thing coming, period — Dolorous Edd & Co. slam a couple levers on top of the Wall and a giant anchor on a chain swings down, shaving off ice and Wildlings as it goes? Genius!

Another single-use scenario, but one could argue that Melisandre really set the tone for what was possible in the world of GOT when she unleashed this horrifying smoke assassin from her womb. Davos was so not ready.

The Red Viper wielded this giant knife on a stick like Donatello from the Ninja Turtles, and ultimately it did find its intended mark. Too bad it wasn’t enough to save him from …

… the massive mitts of the largest man in Westeros, which crushed Oberyn’s skull like a grape and gave us some of the best fan reaction videos of all time.

Fairly limited in scope, but always comes up huge in the clutch. Bonus points for being the goodest boy. None of which, however, was enough to stop Jon from ABANDONING HIM WITHOUT SO MUCH AS A PAT ON THE HEAD. Dick move, “Aegon.”

Torgo Nudho’s spear work has always been impressive, if infrequently showcased to maximum effect. This all changed in the show’s penultimate episode, in which our favorite eunuch badass went full John Wick through the streets of King’s Landing and worked out his Missandei grief to particularly bloody effect. And yes, there’s an argument to be made that all that killing was totally unnecessary and in service of a queen who has well and truly lost her marbles, but hey — Unsullied gonna do what Unsullied gonna do.

This goddamn dagger was like a bad penny, kicking around since season one and occasionally turning up like “hey, remember me? I’m that fancy knife that features quite prominently on this show but is never actually used to kill anyone.” And then Arya plunged that bad boy into the Night King’s heart, ending the Great War. Good for you, fancy knife.

It’s the TNT of GOT, and while I’ve always found the ghostly green glow to be a tad over the top, one cannot deny wildfire’s effectiveness in terms of inflicting unprecedented carnage at scale — to quote the great Samuel L. Jackson in Jackie Brown, “when you absolutely positively got to kill every motherf*cker in the room, accept no substitutes.”

Even the smallest of Dany’s dragons (and also the one named for her Class-A Shitbag of a brother) is still, at the end of the day, a dragon. And dragons are pretty tough to beat. Unless, of course, you have…

Speak softly and carry a big stick, they say. Or, in this case, speak not at all, carry a big stick with a shiny ice dagger on the end of it, and throw that thing like Jan Železný on his best day ever. We thought the dragons were invincible. We were wrong.

Jon Snow’s dragon steed did copious damage, roasting enemies both alive and undead from Slaver’s Bay all the way to the Battle of Winterfell. A flame spitting force to be reckoned with, no doubt. Though he might have kept an eye on the sea below to avoid…

Took Team Cersei a couple tries to perfect these massive crossbows, but once they did and mounted them on the decks of Euron’s fleet, not only was it a wrap for Rhaegal, but also all of Dany’s ships. Damn you, Euron Greyjoy!

Undefeated in the field with a perfect 63-0 episodic record,* Drogon is, as of this writing, the undisputed GOAT of Game of Thrones weaponry. Need to melt the faces off a pesky warlock and/or slave dealer? Baby Drogon got you on that. Need to scorch an arena full of assassins or a whole fleet of ships? Teenage Drogon is up to the task. Need to lay waste to massive swaths of troops, or, on a particularly trying day, pretty much the entirety of the largest city in Westeros? Get you a fully-grown Drogon. No counterpunch has proven effective thus far. You cannot stop him, only hope to contain him, and thus you better pray you never run afoul of his mother.

*Yes we are aware that Drogon didn’t actually appear in all 63 episodes since hatching in the Season One finale, but you know what we mean.