Are We Finally Witnessing the Rise of the Men’s Handbag?

If you've always been curious about the trend, now's the time to dive in

Jerry Seinfeld and his beloved "European carry-all," moments before it was stolen.
Hulu
By Lee Cutlip

The men’s handbag has always been viewed as something of a joke. In season 9, episode 12 of Seinfeld, Jerry briefly sports a “European carry-all,” a small black leather satchel with silver hardware. He carries the bag as a means of more efficiently toting around his girlfriend’s belongings, which she frequently pawns off on him, but he soon grows to appreciate its usefulness in his everyday life. Eventually the bag is stolen from his person, and in order to gain the attention of a nearby police officer, he’s forced to shout that someone’s stolen his purse. And there it is, the joke — the absurdity of a man carrying a “woman’s” accessory. How funny.

Still, men have and continue to carry bags, but they’re usually of a particular type or style, say a rugged backpack or sophisticated leather briefcase, and overt in their masculinity lest it be mistaken for something a woman could potentially own. Even the language surrounding the men’s accessory has been deliberate and cautious; “handbag” has been derided as too feminine, so in an effort to further delineate the men’s version from women’s, “man” is often affixed before bag.

But some 22 years after the Seinfeld episode aired, it would appear the tides are finally turning, with the men’s handbag (or just bag, if you prefer) poised to become a serious and even necessary addition to one’s wardrobe. Or that’s what the designers of the Fall 2021 Menswear collections are hoping for, anyway, as many — not just the usual accessory powerhouses like Dior and Hermès — featured their own version of the accessory.

But the evolution of the men’s bag from something to be scoffed at to something sought after has been quietly under way for some time, beginning with the hypebeast. A few years ago, seemingly every streetwear enthusiast had a compact, utilitarian crossbody or a waistpack slung across their chest, gleaning inspiration from the likes of A$AP Rocky and Travis Scott, who unabashedly wore their own. Designers were quick to capitalize on the trend, most notably Virgil Abloh and his collaboration with Supreme as Louis Vuitton’s creative director. The collection created a frenzy, with the Epi Danube PM, a small crossbody, becoming one of the more desired pieces.

More recently, in October of last year, Harry Styles was photographed carrying Gucci’s Jackie 1961 bag in black, then days later the same bag in turquoise. The style was reissued for the fall and winter of 2020, making its debut at the F/W 2020 menswear show on a handful of male models, who either carried it by hand or over their shoulder like Styles. In the accompanying campaign, the bag was photographed on both male and female models, boldly presented as a gender-neutral accessory.

The difference in silhouette between the crossbodys favored by hypebeasts and Gucci’s Jackie 1961 is evident, with the latter a handbag in the more traditional sense. Whereas a fanny pack can be carried under the guise of pure functionality, a style like Gucci’s communicates more, and is thus likely to be worn for the status and statement it conveys, rather than its capabilities as a functional accessory.

Peter Haury, Men’s Buyer of Accessories and Footwear at East Dane, notes a shift from streetwear styles to silhouettes that offer an extra flourish. “While the streetwear community drove significant interest in men’s wearables during 2018 and 2019, I think those trends opened customers’ minds to a variety of silhouettes that might meet their needs in different ways. We’ve seen the streetwear customer begin to gravitate to smaller, item-specific wearables (neck pouches and phone-sized crossbody shapes) as well as towards larger handbag silhouettes from our designer tier,” Haury tells InsideHook.

While there’s still a demand for bags of the waist/belt bag variety, Haury has noticed a “cooling” of the trend but increased interest in the more traditional handbag shapes offered by the site’s higher-end designers, which include Marni, J.W. Anderson and Lemaire, among others. “In recent seasons we’ve seen more brands offer structured handbags, hobo shapes, and a variety of small crossbody styles – all of which are finding traction with our customers,” says Haury, with customers finding themselves more comfortable with these traditional silhouettes, something Haury expects to increase as the barriers between masculine and feminine continue to relax. Ultimately, as with so many other things, the fate of the men’s handbag as short-lived trend or enduring wardrobe staple will come down to how comfortable men are with their masculinity.

If you’re still unsure of the shoulder bag silhouette, try something like Dunhill’s Black Lock Bag worn as a crossbody. The structured leather and heavy gold hardware offer a more masculine feel while still providing a way for you to hold your essentials.

Forego the leather briefcase and opt for Marni’s Tribeca Tote as your new work bag. Crafted from coated canvas, the bag is durable enough that you won’t have to be too precious with it, and it will offer a much needed dose of fun to your outfit via the two-sided design, which features an off-white on one side and kelly green on the other.

For those fully ready to embrace the men’s handbag, there’s no better place to start than Bottega Veneta. The brand has been experiencing a renaissance under the new creative direction of Daniel Lee and their handbags have quickly become some of the most sought-after. The Arco bag is made using the brand’s famous Intrecciato Hydrology leather and features and oversized weave pattern. You’ll certainly be hard to miss carrying this bag, but that’s entirely the point.

If your style leans a bit more western/Americana, then Ralph Lauren’s RRL Hand-Tooled Leather Tote should appeal to your sensibilities. Handmade by artisans in Mexico and individually tooled by hand, this is the kind of bag you’ll wear, and treasure, for years to come.

On those days when you need to carry only the essentials, Acne Studios’ Small Leather Messenger Bag allows you to easily tote them around and go hands-free. Petite in size and minimal in design, it’s the ideal bag for grabbing as you’re heading out the door, capable of working with a multitude of outfits and so small you’ll forget it’s even there. 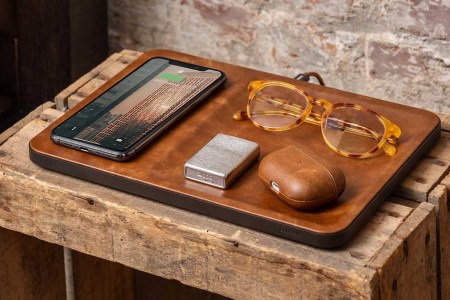 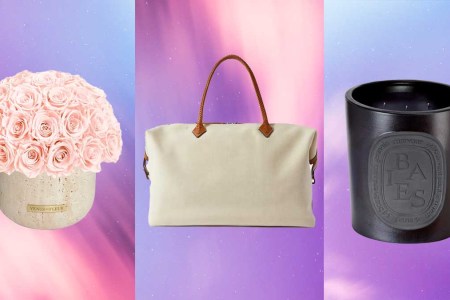