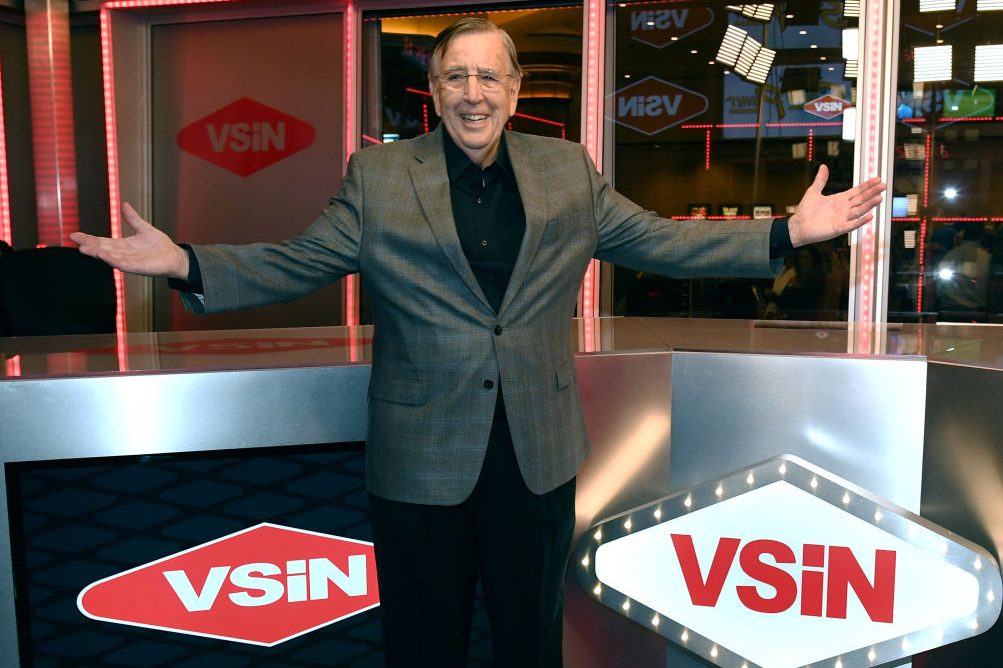 On the last day of January in 2017, sports media legend Brent Musburger called the final game of his career — Georgia taking on Kentucky in NCAA basketball — putting a cap on more than five decades working as a host and play-by-play commentator.

But Musburger, whose résumé includes radio or TV play-by-play or hosting duties for Super Bowls, College Football Championships, Final Fours, NBA Finals, World Cups, the Belmont Stakes and the Masters, was not retiring.

Instead, Musburger was walking away from his job at Bristol-based ESPN to join the family business in the Las Vegas desert.

The brainchild of Musburger’s nephew Brian, VSiN initially launched with five hours of live programming per day, but now airs 17 hours of content during the week and at least 14 hours on weekends.

“No one’s doing the hours of programming and really following this as a live market the way we do,” Brian Musburger tells InsideHook “I don’t know. If you were to say you’re covering the New York Stock Exchange because you do a one or a two-hour show or podcast, I don’t really think that’s covering the market. We are covering sports betting markets around the clock in a way that nobody else is. One of the things I think we’re doing really well and better than anybody else out there, quite frankly, is helping to educate new bettors and give them credible information to make more informed wagers.”

A Chicago native, Brian first got the idea for starting VSiN after watching his uncle do an appearance at the Mirage in Vegas with legendary oddsmaker Jimmy Vaccaro.

“The conversation between Brent and Jimmy was so just informative and entertaining that I thought it would work well on radio and on TV,” the younger Musburger says. “I got the wheels going and we started to put together a team to pitch the idea of creating a credible voice for sports betting news and information and talking directly to the people that were betting hundreds of billions of dollars every year on sports. A lot of the outlets at that time were linked to unregulated offshore books and some of the information was a little bit … it was a little shady. It was hard to find credible sources, so we felt there was a hole in the market and did our best to fill it. Betting on sports is tough, but there is a good way to do it that can improve your chances and I think that we’re helping to educate a lot of folks right now and that is going to be a growing need.”

When VSiN began, it was already a family business as Brian’s wife Michelle handles public relations for the company and his father, a former agent, serves as general counsel. That family business dynamic only grew when Brent came aboard in a move that Brian says wasn’t always a certainty.

“Honestly, I didn’t know if Brent would join but I knew he’d be the ideal guy to help launch the network,” Brian, 48, says. “He obviously knows the players in the space. He enjoys betting on sports and he’s made no secret of that throughout his career, so he was obviously the ideal guy to help launch the network. But I didn’t know if he would be willing to leave ESPN. He had a great setup there and I was thrilled that he was willing to take a chance on the idea.”

As Brians points out, taking chances is part of the elder Musburger’s DNA.

“Throughout Brent’s career, he’s been at the cutting edge of a lot of things,” Brian says. “He’s always been able to see what’s coming next. He really created the sports pregame show and was able to pivot after going to Disney. He’s really had a remarkable career and I think part of that is just his ability to know what the people want. And I’ve got to give him credit. He saw this thing blowing up and was very encouraging when I first came to him with the idea.”

Airing daily, Brent’s show My Guys in the Desert (which also features Ron Flatter, Vinny Magliulo and Bruce Marshall) has become one of VSiN’s most popular programming pieces.

With his 80-year-old uncle in the fold, Brian’s company hasn’t gone up in smoke and instead only continued to grow. In addition to still going out over the radio on SiriusXM, VSiN’s programming is now available on video streaming services like Sling TV and fuboTV as well as a handful of regional TV sports networks and more than 150 terrestrial radio stations around the country. Through all those outlets, VSiN’s programming now reaches 13 million people a month.

“There is a family element to it, but it’s grown well beyond that now to more than 50 employees. But it helped to have a family that had experience in the industry, that’s for sure,” Brian says, “It’s great to be able to work with your family. It can be challenging but it’s also incredibly rewarding.”

And, especially with about half of the states in the U.S. expected to have sports betting laws on the books by next year, the Musburger family business won’t be cashing out anytime soon.

“I’m teaching my 12-year-old and 10-year-old math by hanging out in the sportsbook, so when they get a few years older, I’m sure they’ll be joining the business as well,” Brian says.