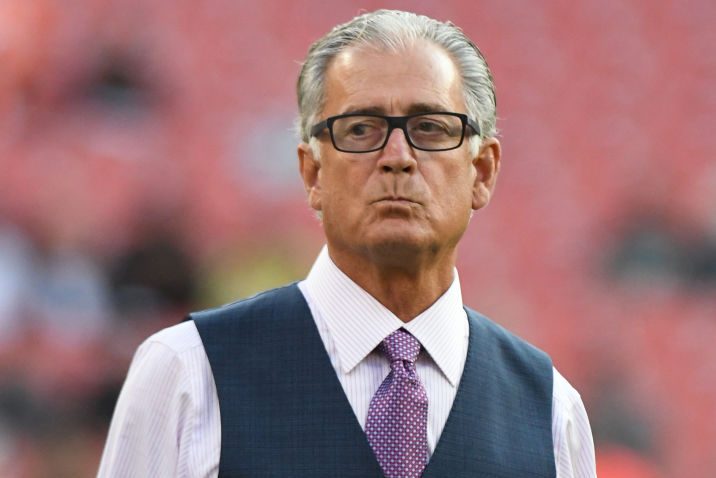 From choleric coaches to fuming fans, former NFL VP of officiating Mike Pereira had a lot on his mind during his 14 years working for the National Football League.

Entering his tenth year away from the league after retiring in 2009 to join FOX Sports as a football rules analyst on select NFL and college broadcasts, Pereira still has his worries, but they’re of a much different variety.

These days, Pereira, who has been involved in football since 1982 when he was an NCAA Division I official, stresses about a point he made during a broadcast rather than a call made during a game.

“You’ve just been involved in a game that lasted three hours and just like a player, just like an official, there’s always a question in your mind about something you said and if it was the right thing to say or if there was something you failed to say,” Pereira tells InsideHook. “Obviously, Joe [Buck] and Troy [Aikman] and Erin [Andrews] do all the talking, and I only periodically enter the fray, but even for me I could be sitting there afterward at the airport thinking I wish I’d have pushed the button or could have to a situation.”

Pereira, who’s also officiating football prenups on behalf of Buffalo Wild Wings, usually has another pressing postgame concern: dinner. “You get a little bit of time to munch at halftime, but that’s only a 12-minute break,” Pereira says. “And that’s a total break, so it’s not a lot of time to eat. We don’t usually normally get to eat until we get back to the hotel or to the airport.”

If circumstances allow for it, Pereira will go for a vodka drink and some wings doused in honey barbecue sauce. “Give me a stack of them,” he says.

But Pereira’s wing worries and broadcast bothers pale in comparison to his concerns about the amount of instant replay in football is doing to the game.

“When we brought [instant replay] back in ’99, it was based on the ground, it was based on lines, it was based on planes and there were decisions that could be made that were based on absolute fact,” Pereira says. “Where we’ve got to with replay, and I’m not gonna say that I’m innocent in this, is we’ve started going down the path of judgment, of bringing human judgment into replay. And it really doesn’t belong.”

What started with reversing rulings about whether a player was down prior to a fumble has moved into deciding what constitutes a catch.

“We went catch or no catch,” Pereira says. “Now they’re reviewing the element of time. Did he have it long enough? That’s subjective in many cases. I really do think it’s gone beyond what it was really intended to be, and where it stops, I don’t know. I don’t care if you have a hundred cameras — you could stop the game an unlimited amount of times — you’re never gonna correct everything. Not gonna happen. It’s impossible.”

Though more calls might technically be “right,” the game is suffering.

“I worry about the pace of the game and I worry about the amount of dead time that we have in games,” Pereira says. “Officiating has always been about advantage and disadvantage. I think we officiate plays now and call fouls and limitations that really don’t create an advantage one way or another. I would like to see that addressed to get a more smooth-flowing game. That’s hindsight after being done for 10 years.”

Surprisingly, Pereira doesn’t think a new rule which went into place this year that allows pass interference to be challenged and reviewed will have a huge impact on the game.

“I don’t think we’ll see any more calls or any fewer calls on the field,” he says. “I don’t think we’re gonna be catastrophic in having five stops per game. I think coaches respect that they need to save their challenges. They respect they need to save their timeouts. And it’s tough to lose a challenge. I just think the coaches will be far more conservative than they’ve been in the preseason. To me, that’s the way it’s gonna turn out and not to be nearly as big an issue as everybody thought. I’m not an advocate of the rule. There’s too much judgment involved for this to be in replay. But I will admit, even though I’m not an advocate, I am pleased with the way that New York, the replay center, has handled it because they have been consistent.”

Something else Pereira is no fan of is a proposal Bill Belichick made which would allow coaches to challenge any call on the field. “That would be ridiculous,” Pereira says. “People would say it makes sense because you’re limited to the number of challenges you have anyway, so you’re not adding more challenges. But, oh yes, you are, because, in reality, there’s less than one coach’s challenge per game. If you let them review everything, then that less than one per game is going to go to five per game and it’s gonna go have a profound effect. I’m glad that even though he’s Bill Belichick and others would think along that line similarly too they haven’t considered that. I’m glad [the owners] haven’t voted for it.”

If they do at some point in the future, it’ll be just one more thing for Pereira to worry about.